The Remarkable Ancient Navigation System of the Marshall Islands 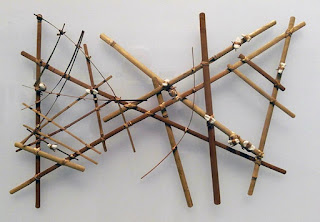 What is important about all this is that ancient peoples found effective physical means to store important information and also share it.  We see glimpses of that in petroglyphs which likely served very well to establish clan boundaries.

After all, all that demands is for the leaders of the two clans to meet at a chosen point and together etch a rock face with clan totems.  such information is then easily shared with the rest of the tribe.  Rather obviously, trying to make more of such efforts is silly.  The important information was always territory.

The actual footprint of an island in the waves was actually huge and reliable and natural variations allowed it to be well read as well.  It allowed you to sail with the prevailing wind to a great distance out of sight before turning and sailing back against the wind.

It nicely compliments sailing against the wind and quickly returning.  both cases provide a natural path home.
.

The Remarkable Ancient Navigation System of the Marshall Islands

3 AUGUST, 2016 - 03:43 MARK MILLER
People were navigating long distances between islands in the Pacific for at least 2,000 years. How did they do it without astrolabes, sextants or modern satellite positioning technology? One group, the Marshall islanders, used unique stick charts and closely read the sea and its swells and currents for clues about where the islands were.
Distances between islands in the Marshalls and the rest of Polynesia stretch for hundreds and thousands of miles in the vast expanse of the Pacific. People lived there long before modern navigation implements came along, but for hundreds of years the Marshallese had their own effective technology.
It turns out Marshall Islanders of the Pacific Ocean and Polynesia used a couple of techniques. For one, they used rebbelib, charts made of sticks to show the currents and wind patterns and cowrie shells to show the location of the islands. They also used (and still use) a technique called wave-piloting or di lep .
A brief article about rebbelib on Popular Mechanics says Marshall Islanders used the charts for centuries but adds they are not meant solely as visual maps because they’re not to scale. It would be difficult for someone unfamiliar with rebbelib to use them. “The bamboo sticks that make up the frame also represent ocean currents and wind patterns, which Marshallese sailors use as navigation guides,” the article says 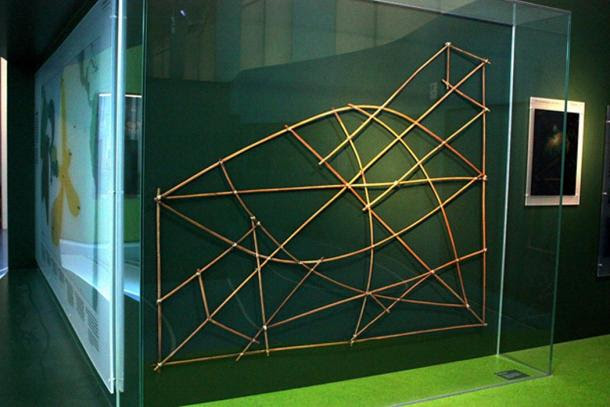 A large rebbelib in a German museum ( Wikimedia Commons photo /Sterilgutassistentin)
Wave-piloting to navigate the ocean involves seafarers finding their way between islands by the direction and shape of swells. Wave pilots know how swells are influenced by coming into contact with the islands. It is hard to do and very few people do it anymore.
A long article from March 2016 on the New York Times Magazine website is titled: The Secrets of the Wave Pilots: For thousands of years, sailors in the Marshall Islands have navigated vast distances of open ocean without instruments. Can science explain their method before it’s lost forever?
As Westerners came to the islands over the years and disseminated modern navigation techniques, wave-piloting began to die out and was just used around the island of Rongelap to the north. In 1954, the United States bombed nearby Bikini Atoll with nukes, poisoning nearby Rongelap. The art of di lep , as practiced by ri-metos, or “persons of the sea,” was nearly lost but for the fortunate training of one man, now older, when he was a youth In 1954, the U.S. government set off nuclear bombs on Bikini Atoll five times over a few months. Bikini is near Rongelap Atoll. While Bikini was evacuated, Rongelap was not, and many people contracted radiation sickness and cancer, and many women had stillborn babies. (Wikimedia Commons photo)
The New York Times Magazine article, written by Kim Tingley, states:
Over the next decades, no new ri-metos were recognized; when the last well-known one died in 2003, he left a 55-year-old cargo-ship captain named Korent Joel, who had trained at Rongelap as a boy, the effective custodian of their people’s navigational secrets. Because of the radioactive fallout, Joel had not taken his voyaging test and thus was not a true ri-meto. But fearing that the knowledge might die with him, he asked for and received historic dispensation from his chief to train his younger cousin, Alson Kelen, as a wave pilot.
During a research expedition with anthropologist Joseph Genz, who was studying wave piloting, Joel took Genz sailing in yachts in the Pacific Ocean around the Marshalls. At one point in the voyage, Joel told Genz and Kelen that they were experiencing di lep , but neither of the other two men could feel it. Oceanographers from the University of Hawaii could not detect it with their equipment either.
“The idea of a wave-road between islands, they told Genz, made no sense,” wrote Tingley of the Times. She added:
Privately, Genz began to fear that the di lep was imaginary, that wave-piloting was already extinct. On one research trip in 2006, when Korent Joel went below deck to take a nap, Genz changed the yacht’s course. When Joel awoke, Genz kept Joel away from the GPS device, and to the relief of them both, Joel directed the boat toward land. Later, he also passed his ri-meto test, judged by his chief, with Genz and Kelen crewing.
Stick charts weren’t used by all sailors of the Marshall Islands. A select few learned the art and passed it from father to son. When fleets of canoes went voyaging between the islands, the lead canoe would have a ri-meto, who navigated for the entire group.

This video from NOAA states: “Modern science is just now beginning to understand and appreciate the traditional Marshallese navigation techniques. With only a few surviving master navigators, it is crucial to pass on this knowledge to their children so this unique maritime heritage will not be lost forever.”
The people of the Marshall Islands had two other types of stick charts— mattang charts used for teaching navigation, and meddo charts that are smaller than rebbelib and don’t include all the islands of the chain.

http://oceantoday.noaa.gov/oceanshowsusway/otkn_020_theoceanshowsustheway_lg.mp4
These charts recognized four types of swells that came in contact with islands’ undersea slopes and that changed as they interacted with swells for differing directions.
Explanation of stick charts with maps of the Marshall Islands can be found here and here.
Top image: A navigational chart or rebbelib made of wood, sennit fiber and cowrie shells, from the Marshall Islands, on display at the Berkeley Art Museum and Pacific Film Archive. ( Wikimedia Commons photo /Jim Heaphy)
By Mark Miller
Posted by arclein at 12:00 AM

Oh how I would love to talk to you.I was born with a rate birth defect. My father was in the Marshall Islands.(Navy)... Of course no one wants to talk about it.feel Lucky to have found you.