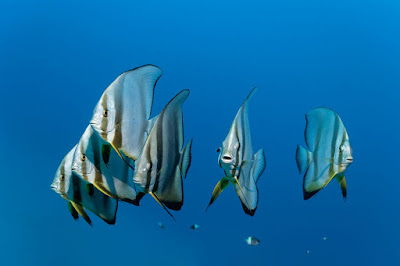 It actually makes great sense but who would have thought this?  What is quickly obvious though is the the range is excellent and that this suggests that laying a listening grid will ultimately allow continuous mapping of population locations that is otherwise impossible.

The commercial value is obvious, but stock management is also suddenly plausible.

Most of this underwater music comes from soloist fish, repeating the same calls over and over. But when the calls of different fish overlap, they form a chorus.

Robert McCauley and colleagues at Curtin University in Perth, Australia, recorded vocal fish in the coastal waters off Port Headland in Western Australia over an 18-month period, and identified seven distinct fish choruses, happening at dawn and at dusk. You can listen to three of them here:
The low “foghorn” call is made by the Black Jewfish (Protonibea diacanthus) while the grunting call that researcher Miles Parsons compares to the “buzzer in the Operation board game” comes from a species of Terapontid. The third chorus is a quieter batfish that makes a “ba-ba-ba” call.

“I’ve been listening to fish squawks, burble and pops for nearly 30 years now, and they still amaze me with their variety,” says McCauley, who led the research.

Sound plays an important role in various fish behaviours such as reproduction, feeding and territorial disputes. Nocturnal predatory fish use calls to stay together to hunt, while fish that are active during the day use sound to defend their territory. “You get the dusk and dawn choruses like you would with the birds in the forest,” says Steve Simpson, a marine biologist at the University of Exeter, UK.

The recordings were captured by two sea-noise loggers: the first positioned near the Port Headland shore and the second 21.5 kilometres away in offshore waters.

“This is a method that allows us to understand what’s happening at Port Headland 24/7 for a year and a half,” says Simpson. “I don’t know any scuba diver that can stay down there that long!”

Listening to choruses over a long period of time allows scientists to monitor fish and their ecosystems, particularly in low visibility waters, such as those off Port Headland.

“We are only just beginning to appreciate the complexity involved and still have only a crude idea of what is going on in the undersea acoustic environment,” says McCauley.
Posted by arclein at 12:00 AM