The Curse of the Bradford Pear 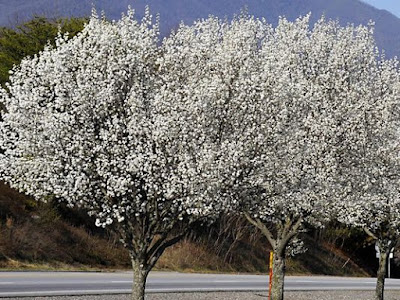 Who would have thought that this was a problem.  In the end, irradiation will be necessary.  However if necessary we can wait for the right equipment to be available.  We already have bobcats and chippers so we must be close.

Nasty plant though and the reversion to the wild form is a surprise.  Yet that must be way more common than expected.

Plant husbandry is the ultimate human destiny.  And when you manage an acre or two, plant elimination is immediate and quick.

I recall how a pasture as it ages soon develops hawthorn trees.  These would do the same thing.  In the end they must be quickly plowed down or removed in some way while young..

The Curse of the Bradford Pear

I’m talking about every white blooming tree right now, with only the exception of wild plums, which is a short multi-flora tree that seldom reaches over eight feet in height. All the other white flowering trees in today’s environment are an ecological nightmare, getting worse and worse every year and obliterating our wonderful native trees from the rural landscape.

If it’s blooming white right now, it’s a curse. This dictum especially applies to that “charming” Bradford pear your dimwitted landscaper planted in the middle of your front yard. Indeed, lack of smarts is what has led to this disaster. Bradford pear is worse than kudzu, and the ill-conceived progeny of Bradford pear will be cursing our environment for decades or possibly centuries yet to come.

When Bradford pear was introduced as an ornamental in 1964 by the US Department of Agriculture, it was known then that this tree possessed the weakest branch structure in nature. Also, the tree was assumed to be sterile. Bradford pears will seldom last more than 20 years before they bust themselves apart at the seams. That’s actually the good news.

In an attempt to extend the lifespan of this despicable tree, other varieties such as Cleveland Select, etc. were introduced. These trees will live for about 25 years. That’s little consolation for the resulting disasters that happened when these other pear varieties were introduced.

After 25 years the ill effects of the steep v crotch branch structure – which all pears possess - take their inevitable course of action and cause pear limb structures to crack, split and bust. You can’t fool Mother Nature, and people who plant pears will sooner or later regret that choice. Planting pears borders on - if not crosses the line – of negligence.

However, the fact that Bradford pear trees are short lived and dangerous is not the real reason that these trees are such a disaster. The problem is that these trees are in fact not sterile. No two Bradford pears will ever reproduce among themselves, but they do cross pollinate with every other pear tree out there, including the Cleveland Select pear trees that were meant to be the salvation of flowering pears everywhere. The introduction of other pear varieties has compounded the problem to the point where it is almost too late to rectify.

Because of the cross pollination problem, pear trees have now proliferated exponentially across our environment. And, to make matters worse, the evil offspring has reverted to the ancient Chinese Callery pears which form impenetrable thorny thickets that choke out the life out of pines, dogwoods, maples, redbuds, oaks, hickories, etc.

When you see those fields of white flowering trees, please don’t get giddy with excitement over pretty white flowers. What you are looking at are Callery pears destroying nature. Callery pears have 4 inch thorns. They can’t be mowed down. Those thorns will shred John Deere tractor tires. They can only be removed by steel tracked dozers, decreasing the value of agricultural or forest land to the tune of $3,000 per acre.

And, make no mistake about this. That solitary Bradford pear growing in your yard is what caused this problem. Your one tree has spawned hundreds of evil progeny. If you don’t believe that, just take a little ride, and notice all the white flowering trees blooming these days. The closer they are to “ornamental” Bradford pear trees, the thicker they are.

If you want to save the world, cut down your Bradford pear trees. I could not be more serious about this.

For those of you who are regular readers, you have read this before. For you first time readers, welcome to the club. This is my annual “Bashing of the Bradfords” column. I appreciate all the support I have had in this campaign from readers who have sent me pictures of cut down Bradford pears and ground up pear stumps. It does my heart good to know that the message is getting out.

If you ever go visit a plant nursery and want to know if it is a good nursery or not, ask if they sell Bradford pears. All reputable nurseries are well aware of the evils of this tree, and refuse to sell them. Don’t let someone talk you into a Cleveland Select or other pear tree, all varieties of “ornamental” pear trees are equally bad.

Save the world. Eliminate Bradford pear trees. Enjoy your coffee.

durantashmore@aol.com
Posted by arclein at 12:00 AM

So true! We had one of these in the front yard and yes, it ended up splintering and falling on the house. It's sad, too -- I used to take the dog and walk down to a little stand of these trees and the robins would always come back early and visit there, maybe to eat the tiny pear fruits. Perhaps this particular endeavor was engineered by the tree planting folks to keep them in full employment when the trees had their early demise. So folks, let's try to plant native trees, especially the ones with edible parts, and avoid this monocultural menace!!