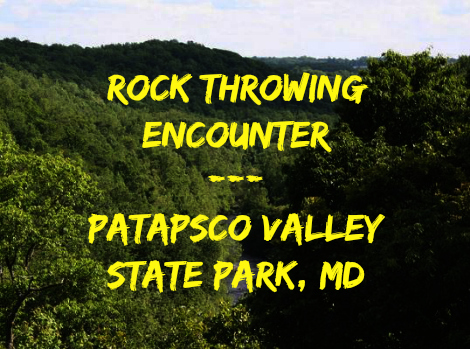 This was clearly a Bigfoot encounter that compares well to one i came across fifteen years ago.   A deer herd is been stalked and the Saquatch(s) are closing to within stone throwing range.

The observer enters the scene and in this case is been warned off without disturbing the deer.  They caught on and got out of there.

This joins a rather short list of sightings in which hunting behavior is observed and recognized.  I have little doubt that the primary food stock of the Sasquatch is the deer on an almost year round basis.  They will also take swine and large fish as well.
.


I recently received another possible Bigfoot encounter along the Patapsco River (Patapsco Valley State Park). This is the 2nd encounter in the general area around Daniels, Maryland:

Just wanted to tell you of an incident that happened to my daughter and I in Patapsco State Park (Daniels Area). It was Aug 26th 2015, time was 6:45 pm, the evening before school started. We Had walked about 35 minutes down the trail along the river. We have walked this many times, but not this late in the day. We were coming upon the third culvert when we saw deer on the hillside. They were midway up the approx 70 foot hill. They were completely still. I heard heavy footfalls, but didn't want to alarm my daughter. (We both have high anxiety)!!!

So we walked about 40 more feet and were looking at the river. I turned and walked off trail to go look at the culvert. As I walked toward it my daughter told me to come back cause she didn't "feel good". (This means she is beginning an anxiety attack).

I immediately turned to her and that is when I heard an object hit the ground about 10 to 15 feet away. We both froze and she said let's go...I wanted to find out what it was. I said "hold on a minute"...that's when another larger "rock" or object landed only 8 to 10 feet away from me. My daughter got really upset and that's when I decided we should go.

We left very quickly. I noticed the deer still only midway up the hill.

We have been interested in the subject of Sasquatch for many years and knew immediately that it could be them. But, in Patapsco? I am still unsure if this could have been a Sasquatch, however, reading accounts of others, it could have been. There was only one other person we saw on the trail and he was running. Foliage was so thick, Very quiet!

I did report to the BFRO but after the gentleman came out to the site, we never heard anything else from him.

Thank you for what you do!! CS


NOTE: Because of the time of day, there is a very good possibility that the witness and her daughter disrupted a 'hunt.' I called the witness and we talked, in detail, of the activity along the river and throughout the state park. Though the witness has knowledge of Sasquatch lore in Maryland, they were not aware of other sightings besides the flap near Sykesville in the early 1970s and the well-known encounter in Arundel Mills, MD. Lon

Here is another encounter I posted last year:

My son and I had an experience with Bigfoot. We were walking in a unpopular part of Patapsco Valley State Park in Maryland. At first we were searching for ruins of a town washed out in the seventies. He was fifteen at the time and we were not having luck. Right from the beginning I got the creeps. We are in the middle of Nowhere Forest and we come across an empty ball field with metal bleachers and a shack that was open with dated equipment in there. As we were walking through the field I felt scared, like there were eyes on us all around. I said nothing.

About thirty minutes in we realize were in the wrong area. I was thinking 'Oh good I failed my angry teenager again. He is going to forever think I can't do anything right.' We see a burned-up pine tree and I stop to take a picture. My son says "This is lame lets go" This is where things get real fast.

We turn around, walk twenty steps. He picks up a stick and bangs a tree. I look down and see deep footprints in the semi-dry mud. Those tracks were not there when we walked up. We take pictures. I jump up and down to try to recreate the indentation and I cant do it. I then realize that we are being followed. Panic sets in. I declare a swift departure. I think to myself is my child safer in front of me or behind me? That is a shitty thing to have to think. I push him in front of me. He has a machete and I have a stupid stick. We start to run walk back. This is what we hear.

Rustling along the side of the path, my son sees an arm. We hear the sound of a jug. You know the sound you hear when someone is blowing on a jug top. We see two different sized prints, small ones and large ones. We run by what looks like bedding in thick cool grass. We start to feel safe getting closer to the car. My son beats a stick against a tree. At that point a giant roar scream erupts behind us. So I grab the stick and scream at him "Stop hitting the effing tree we know it works RUN!"

We make it back. I'm repeating the words I wish that never happened to us. He's repeating 'that's the best thing that ever happened to me.' We get home and I am virtually retarded with stress. My son said we have to tell someone. Oh man I think. I cant deny it, my son was with me. Thus began my contact with a Bigfoot specialist and a cryptozoologist. I would say to my husband "If the Bigfoot person calls, tell him I'll be back by seven thirty." It was 2 years ago. I have thought about it a lot. I believe them to be real and not real at the same time. Somehow I think they are spirits of the forest. I also no longer care if people believe me or not. It happened and I have nothing to gain from the story. Also I told the Bigfoot people to stop telling people to bang on trees. They hate it.


NOTE: This is in the same park where I had my encounter in 1981. The Daniels, MD location is about 6 miles downstream from my encounter on the south branch of the river. The mill town was washed away in 1972 during the floods from Tropical Storm Agnes...so much of the location is in ruins. Lon 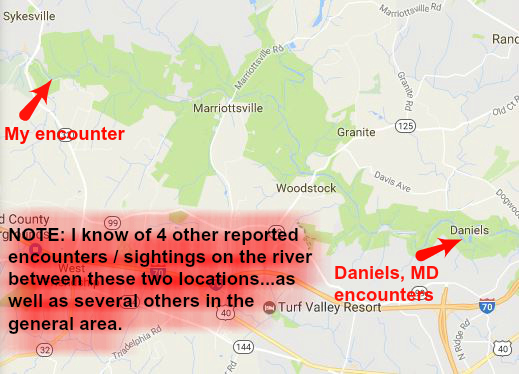 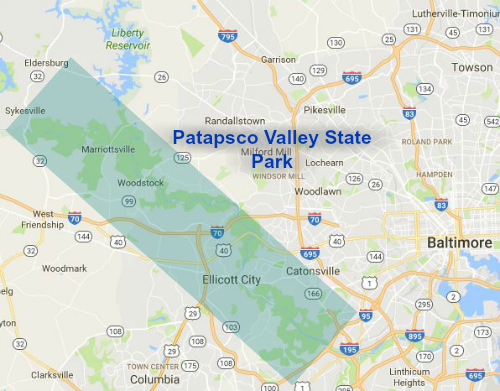