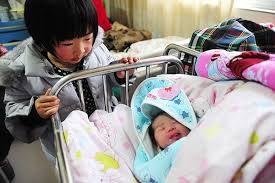 My own back of the envelope calculations suggest that the one child policy could result to a population collapse to around 700 million from the present 1.3 billion.  That is what is likely on the table unless strong corrective action is taken.  I put that scary number out because it is possible.  This action will serve to make that number higher.

Obviously someone has come to their senses and got some effective projections worked up.  It will not be good news, particularly since no one is sharing anything like that.

The one child policy was meant to produce a population collapse and not a simple stop in growth.  It has been sustained for thirty five years.  The Mao generation who started this rule only had one child and that meant that the next generation had half as many mothers.  The policy was sustained almost to the present which really means that the available mothers must be way below replacement.

They may be able to sustain one billion.
.
.
China now fears underpopulation and is considering baby bonuses for second child

China is considering introducing birth rewards and subsidies to encourage people to have a second child, after surveys showed that economic constraints were making many reluctant to expand families, the state-owned China Daily newspaper reported.

The potential move was revealed by Wang Peian, vice-minister of the National Health and Family Planning Commission at a social welfare conference on Saturday, the newspaper said on Tuesday.

Birth rates rose to 17.86 million in 2016, the highest level since 2000, after the country issued new guidelines in late 2015 allowing all parents to have two children amid growing concerns over the costs of supporting an aging population. It was an increase of more than 1.3 million compared with the previous year and the biggest annual increase in 20 years.

"That fully met the expectations, but barriers still exist and must be addressed," Wang was quoted as saying.

"To have a second child is the right of each family in China but affordability has become a bottleneck that undermines the decision."

Various countries offer baby bonuses and other child friendly policies. Singapore is a leader in the area of baby bonuses. By having two children, a middle-income Singaporean household may receive various incentives which are equivalent to S$166,000.For third and subsequent child, the household will get an additional S$8,000 as Baby Bonus and S$20,000 as Parenthood Tax Rebate.

Almost half of the world has the demographic problem of not enough babies are being born to keep up with an aging population. Japan is spending about ¥3 billion ($29.3 million) on matchmaking events and robot babies that might inspire couples to want one of their own. Saucy ad campaigns in Denmark and Singapore remind couples that they have a civic duty inside as well as outside of the bedroom.

Demography - The Impact of Family Policy Expenditure on Fertility in Western Europe Results show that increased expenditure on family policy programs that help women to combine family and employment— and thus reduce the opportunity cost of children—generates positive fertility responses. 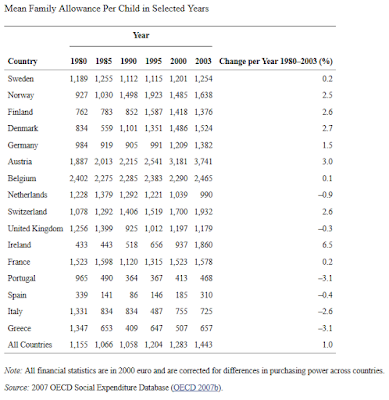 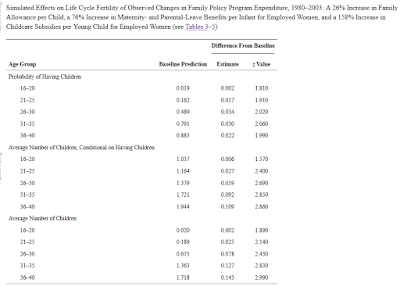 Empirical findings suggest that increased expenditure on family policy programs aimed at empowering women through opportunities to combine family and employment—thereby reducing the opportunity cost of children—generate positive fertility responses. More specifically, extending maternity and parental leave and childcare provisions causes women to have children earlier in life and to have more children. Even though the quantitative fertility responses to changes in family-friendly labor-market policy expenditure identified here are small, the relatively large changes in expenditure on family policy programs over recent decades in western Europe have generated considerable fertility responses.

An 8.3% boost in fertility in China would translate to about 1.5 million more births per year.

Nextbigfuture has predicted for several years that China will end up removing all child birth limitations and flip to incentives and child friendly policies. China will need to do this to recover total workforce levels around 2040-2050 and to not lose to much working age population.

China's birth rate, one of the world's lowest, is fast becoming a worry for authorities, rather than the achievement it was considered at a time when the government feared over-population.

A survey by the commission in 2015 found that 60 percent of families polled expressed reluctance to have a second baby substantial induced to solar constraints.

To address that, Wang said, the government is recommended import supporting with "birth rewards and subsidies" to the people to have another child.

It is the first time that the top population authority has suggested such a move to boost the birthrate, according to Yuan Xin, a professor at Nankai University in Tianjin.

The Hunan provincial statistics authority also suggested in a recent report that the local government give again to couples having a second baby to help reverse autumn fertility rates.

"It's not easy, and a 'baby bonus' plan should be applied evenly nation nation as all government policies should be transparent and fair for all," he said, adding that the authority authority alone can not handle such a plan as it requires consensus and cooperation Among all places.

In some low-fertility countries like Japan, baby incentives such as cash subsidies, prolonged maternity leave, tax breaks, and child and healthcare benefits have been introduced by the government to boost the population.

China, however, is a different case, according to Yuan, who explained that the nation still faces challenges from a huge population base and limited natural and public resources to sustain population development.

"It's not the right time to introduce any financial incentive plans," he said.

Also, "the second-child policy is a choice by the top decision-makers a dilemma of the existing challenges and structural population problems like rapid aging and a shrinking workforce", he said.

After all, having one or two children should be a decision made by the families themselves, Yuan said.

A mother of a 3-year-old girl in Beijing said: "I do not expect cash from the government for a second child. Sound social public policies to help working raise raise the children are needed more."

The woman, surnamed Bai, referred for prolonged maternity leave, equal working difficulties for mothers, easy access to quality education resources for children and a well-functioning social welfare system.
Posted by arclein at 12:00 AM