Permian shale boom in Texas is devastating for Opec The Permian  is the great mother lode of oil as it is like a multi layer cake and all earlier production drilled through low permeability zones in order to exploit only those likely in the form of porous sandstone.  A little like drilling through hundreds of feet of tar sands in order to produce a ten foot section that free flowed.


Now of course we actually have the technology with massive tracking and long horizontal wells.  decline curves are a problem here as well but good management can largely work around even that when the actual reserve is in the form of an entire basin.

Obviously multiple layers can be tapped from the same drilling pad as well.

The point is that production is likely to at least break even with a rapid payback which encourages drilling like crazy.
.
Permian shale boom in Texas is devastating for Opec

The Opec oil cartel is waking up to an unpleasant surprise. Shale output from the Permian Basin in Texas is expanding faster than the world thought humanly possible.

The scale threatens to neutralise output cuts agreed by Saudi Arabia and a Russian-led bloc last November, and ultimately threatens break their strategic lockhold on the global crude market for a generation.

"People just don't seem to realise how big the Permian is. It will eventually pass the Ghawar field in Saudi Arabia, and that is the biggest in the world," said Scott Sheffield, founder of Pioneer Natural Resources and acclaimed 'King of the Permian'.

"We think it could produce 8-10m barrels a day (b/d) within ten years. We're telling our investors that Pioneer could reach one million," he said. Roughly 70pc of this would be crude oil, and the rest in gas and liquids. 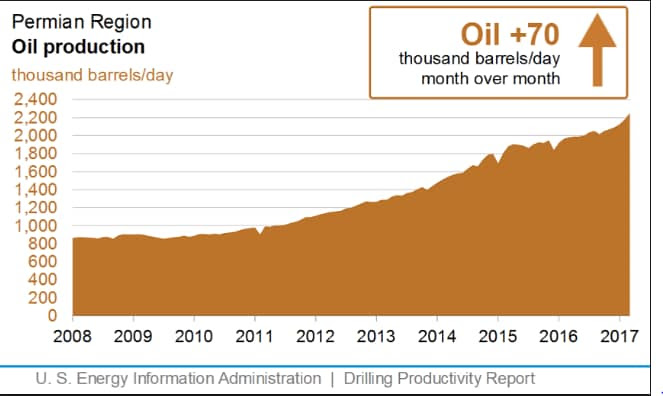