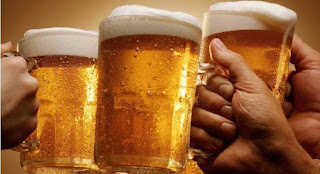 A seven percent drop, primarily in mostly lower grade beers is hardly a problem when it is been replaced by a vastly more profitable line of business.  At most it accelerates the established decline for such product driven by the craft brew industry.

I also suspect that this decline will not bite much deeper.  Thus the industry certainly can handle it.  We are not even slightly close to witnessing the end of alcohol.  In the meantime the whole industry is upgrading product to establish better margins.  As well they should.

Yet we see a round of ill advised lobbying under way.  It will make scant difference.  A better strategy is to partner distribution with the craft brewers and promote premium pricing. In short get your piece of a richer market..

Some new cannabis statistics are undoubtedly causing the alcohol industry in the US to shake in their boots.

With over half of the country’s states embracing some form of legalized marijuana, with a few states even permitting recreational use, cannabis is poised to affect the alcohol industry at some point. And according to a new study, the beer industry stands to lose billions if marijuana is legalized nationwide.
The study states, “Cannabiz Consumer Group’s (C2G) research findings predict that legal marijuana will “canna-balize” 7.1% of revenues from the existing retail beer industry.” Even though the revenue margin may seem small to some, the profit losses are predicted to exceed 2 billion dollars.

And while the research attempts to predict what will happen when and if weed is legal nationwide, many alcohol consumers are already making the switch over to marijuana. The study writes, “Twenty-seven percent (27%) of beer drinkers state that they already have substituted cannabis for beer, or would substitute their beer retail purchases with cannabis in the future if legal.”

There’s no shortage of pot smokers either. The study proclaims, “There were 24.6 million legal cannabis consumers in the US in 2016.” And while beer, wine, and, liquor sales will certainly be affected by the nationwide legalization of weed, “C2G’s projects that legal cannabis penetration will settle at a level comparable to that of beer and wine and that a fully mature market would create a new $50 billion industry.” Fifty billion dollars is nothing to shake a stick at, so to speak.

“The forecasts were generated using C2G’s CannaUse™ study on the cannabis mindset and behaviors of 40K individual participants, the company’s warehouse of over 55MM cannabis purchase transactions, and CPG consumer panel and point-of-sale data sourced from IRI through an exclusive data and analytic share arrangement,” the study writes.

Rich Maturo, the CEO of C2G explained that there are ways to begin to approach offsetting losses sustained in the beer industry but it comes first from understanding why marijuana users smoke weed. “Those at risk of losing sales to legalized cannabis can undertake a variety of actions to offset their losses,” he said. “Consumers use cannabis to satisfy various need social, medical and experiential need states. By understanding these needs, those at risk of losing sales to cannabis can try to offset some of the losses by understanding and speaking to a consumer’s needs.” That seems to be a positive trait for marijuana a and a negative one to the beer industry.

Socially speaking, alcohol is the most widely used drug in America, made legal after the failed war on alcohol, otherwise known as the Prohibition. Research shows that alcohol not only kills but is often found in the bloodstreams of those who’ve been convicted of crimes at the time they committed their offense. It remains, as The Free Thought Project has reported, one of the most dangerous legal drugs readily available to all Americans over the age of 21.

Maturo says the best way to compete with marijuana is to take a more accepting approach. “Those companies that are gathering insights on cannabis and have the foresight to see it as presenting an opportunity in addition to a risk will fare much better than those who strictly take a defensive position,” he said.

Knowing this information it is no wonder the alcohol industry has been caught multiple times lobbying to keep pot illegal. They are chomping at the bit to force the state to continue kidnapping and caging people who use pot as this forces everyone to be a customer of theirs.

As the Free Thought Project previously reported, within the mountains of email texts of WikiLeaks, was a paid segment by the Wine & Spirits Wholesalers of America (WSWA), stoking fear within Washington, encouraging politicians to be wary of marijuana legalization.

The May 24, 2016 edition of Huddle, a daily Politico newsletter for Capitol Hill insiders, contained this paid advertisement:

** A message from Wine & Spirits Wholesalers of America: While neutral on the issue of legalization, WSWA believes states that legalize marijuana need to ensure appropriate and effective regulations are enacted to protect the public from the dangers associated with the abuse and misuse of marijuana.

Also, as the Intercept reported, the fight against legalized pot is being heavily bankrolled by alcohol and pharmaceutical companies, terrified that they might lose market share.
Posted by arclein at 12:00 AM

Lots of worries about Jeff Sessions as well. His ties are to big tobacco. Mr. S should recuse himself when it comes to cannabis because he has a vested conflicting interest in keeping it illegal. Therefor he cannot be an unbiased prosecutor against legal pot states.

I want to see if he is man enough for that one.

Hopefully all the readers here have researched how cannabis came to be made illegal based on lies, deception, fear based propaganda...the fix was in big time!

Also how dangerous the war on some drugs has become, how deadly Rx drugs are & that cops kill far to many innocent people because they raided the wrong address. They have flash banged a sleeping child, kill an innocent Marine, shoot a lot of dogs, misuse the RICCO statute's asset forfeiture provision...