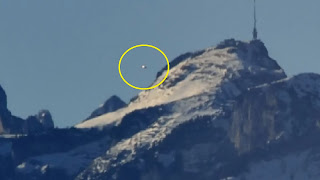 This one is important because we lock in scale because of the surrounding trees it is working around.  There can be no dispute for size and its relative motion either.  Better yet it is also associated with a mountain region and associated updrafts as well as a number of jittering lights in the adjacent skies.


The sting ray shape is excellent for  navigating what is essentially an airbag full of methane and has been observed before.

As i have posted, i posit the existence of slime mold creatures able to create an methane bag in order to easily rise in the atmosphere all the way into the the stratosphere above the active atmosphere.  Mountains would provide an excellent acceleration ramp in order to gain altitude out of the lower atmosphere.


Of course we would fly through them without notice except for occasional blobs of slime on the local lawn.  They seem to have some capacity for mobility although the rapid movements seen are from jumping local air currents.  They are plausibly responsible for the majority of the more obviously benign UFO sightings.

I have actually seen one catch the setting sun while jittering off a mountain peak.


At the urging of a caller, Dave Schrader agreed to talk about the strange flying creature he saw while staying at James Gilliland's ranch in Trout Lake, Washington:


“I went out to James Gilliland's ranch in Trout Lake, Washington. You can find information at eceti.org and while I was out there I had seen these lights in the sky, many different lights in the sky, doing all sorts of different things; some flashing, some moving in rapid speeds and then turning at breakneck speeds but the most profound experience I had was, at one point, we had all been watching Mount Adams, I think was the name of the volcano over there, and we were standing there watching this and I figured, what are we missing behind us? So I walked out into the field and turned around. So I was looking behind everybody else, who were looking behind me. More eyes on the skies, right? So I go there and I'm looking when behind this grove of pine trees comes this internally glowing blue back, I don't know, it looked like a stingray without the tail, the way it fluttered. And it emanated a blue light from within. It didn't glow. It didn't look like it was lighting up the sky. It was just a self-contained light and it just fluttered through the sky behind one set of trees to behind another set of trees. And then it was gone. And it was so eerie, silent eerie, but it looked like a bad 1980s movie video effect. So I was running towards it and throwing rocks between the trees half expecting to hear the sound of screen or something he had back there that he was projecting things on but there was nothing.”