It Appeared In A Flash 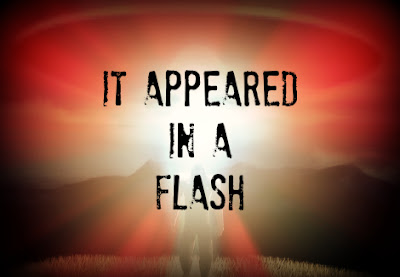 I have come across several reports in which a Sasquatch sighting was associated with a UFO event.   some were strong but still not decisive.  However it is also true that our understanding of the direct encounter phenomena has also advanced to understanding it as a sampling program of humans which usually leaves little trace in memory.  That they would also sample Sasquatch is actually a given and that is actually supported by other reports.

Obviously what happens then is that any human is merely an observer as happened here.

These craft choose the time for collection and release.  Yes we are dipping in and out of local time to do all this. and this is likely the explanation for the flash.

I think that the observer saw a capture event the first night and a release event the second night.

Way more important though is the the Sasquatch was observed along with the two temporal events and clearly involved.  This is real confirmation of what is happening and that it includes the Sasquatch as well as ourselves..
.

It Appeared In A Flash


Hi - I had been listening to the interview you had conducted with Stan Gordon (Arcane Radio). I had an 'incident' happen, about 8 years ago, when I was living in Shasta County, CA. I figured you'd be interested in reading it.


One evening while I was watching television in my living room, I noticed a bright red flash come through the window nearest me. The flash came from my backyard. I looked outside and was shocked to see what appeared to be a flat circular object hovering, then landing, in the field behind my garage. There were blue and white lights flashing intermittently around the object. There was mist or smoke rising from it. I first thought it might be a large helicopter, but it was silent. After a few seconds, the object instantly vanished in another bright flash.


It stunned me, and left me wondering what I had just witnessed. I waited for a few minutes, then went outside with a spotlight to take a look. I am single, so I was alone. There are a few houses on the other side of the field, but the distance to the nearest property is about a quarter mile. I didn't see any other people investigating the lights. There was nothing to indicate that the object had landed in the field, so I decided to wait and look some more the next day.


I didn't find any evidence the next morning. I estimated that the object had been about 50 or so feet in diameter. That night something happened that has changed my belief in the unknown.


I was sitting in the living room watching television at about 9:30 PM, and once again I was stunned by another bright red flash coming from the backyard. I immediately got up from my chair and looked out the window. There was a full moonlight, so I noticed that in the same location that I saw the object land the night before, there was something moving around. I didn't know what to think or what to do. I wondered if I should call the authorities, but then I'd have to tell them about the flash of light and what I had witnessed the previous night.


I just sat there with the lights and television off for several minutes. I then started to hear dogs barking in the distance. Then suddenly I heard something hit the side of the garage, and then a deep groaning sound. I sat there quietly, when I saw a faint shadow move across the window. The window is almost 7 ft from the ground, but the shadow completely blacked out any light. It was moving towards the front of the house. I got up and looked out the dining room window. There was a huge hairy creature illuminated by the light on the utility pole. It must have been 8-9 ft in height and a massive body. This had to be a Bigfoot! As I continued to watch this creature, it walked away from my property, then into the adjacent field. I went upstairs and sat at my bedroom window, just waiting to see if the creature returned.


The next morning, I walked around my property looking for tracks. I did find an indentation in the ground that measured 15 inches long and 6 inches across, but I'm not sure if it had been from the creature. I didn't find anything unusual, other than a cinder block laying by the garage. It had to have been brought there.


To this day, I have only told a few friends about the incident. I wonder if the Bigfoot had come from a UFO or that it came on it's own. CK


NOTE: I contacted CK by email, and received a response two days later. We then talked through Skype, where he described the ordeal. His description of the creature was a bit more detailed...at least 8 ft tall, dark hair covering the entire body, and a large conical head that had a short neck. He didn't get a very good look at the face, but did noticed that it had a protruding jaw and forehead profile.

His description of the incident is unique in one sense, but familiar to other reports where a Bigfoot-like creature could have been associated with the sighting of a UFO...even though there was an approximate 24 hour time difference.

The witness seemed to be very truthful and didn't give me the impression that he was embellishing the sightings.

I sense that this may have been an interdimensional event...but that's just my opinion. It's a rare witness sighting indeed. Lon
Posted by arclein at 12:00 AM