Do You Have The Stomach For Moss and Lichens? 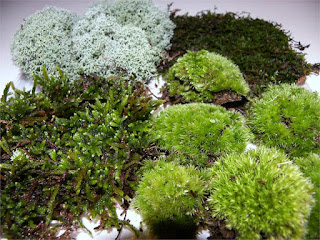 Personally no, but i thought we should ask the question since they were in Neanderthal diets.  I suspect that they used moss to handle hot rocks and certainly to wipe their ass.

What this makes clear is that eating it is possible but unlikely. As they were eating mostly vegetables it is possible that they fished out chunks to eat with sticks and then used moss to hold the hot food while they ate.

Thus we have ample practical reasons to be handling moss while eating, but no good reason to eat moss.  all this would ensure some moss in the mix to be observed now.

Do You Have The Stomach For Moss and Lichens?

Well, winter is rushing toward us.  In northern latitudes, that generally means one to three feet of snow covering the ground, and almost every edible plant in the wild.  Desperate grazing wildlife like deer or bison, or even smaller rodents and birds are compelled to learn to dig through the frozen white for food.  It is a hard season for most animals.  That, unfortunately, includes humans that like to “eat wild.”

I have written about several sources of food in the wild during the winter, but there is one that I have not touched on, for any season: moss.
Most of us believe  that moss and lichens are not edible.  However, lichens make up a substantial part of the diet in the Arctic, and almost every moss and lichen is edible.  That does not imply that they are palatable, or nutritious, but most can, indeed, be eaten.  In fact, many ascribe medicinal properties to mosses, with the most prevalent claim being that they are antiseptic and some are analgesic.  Few studies have either confirmed or denied these claims.  In my experience, though, I have yet to find a “tasty” moss.  They are bitter, acidic tasting or, at best, bland.  But, as plants, they do have some vitamins, often contain minerals leeched from the soils or decay on which they grow, and  are a source of small amounts of chlorophyll. Taste be damned.  When desperate, eat!

There a couple of cautions, however.  Moss, due to its tight “leafy” nature, trap lots of insects, dirt and other undesirable debris.  If you like a bit of adventure with your meal, forego vigourous washing., and chew away!  Moss, as well, often grows, layer upon layer, on years or centuries of decaying moss and other plant material.  Along with unhealthy doses of rot, you are inviting bacteria and other pathogens into your palate.

In short, moss can be eaten, in an emergency, and can be found on tree trunks, rocks, and other exposed areas in the worst days of winter, so, as a survival food, they are welcome.  In any other circumstance, pass moss and lichens by.