Three layers of graphene reveals a new kind of magnet 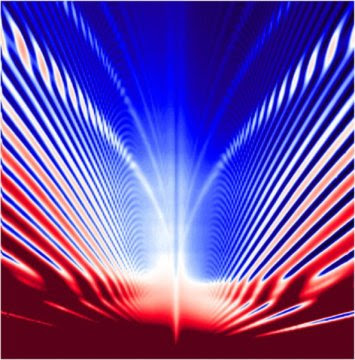 This is truly exotic work.  Read it carefully.  As electrons are moved around to significant new locations the linkage between electrons are 'stressed' and this stress is expressed as magnetism.  This is an important insight that helps in our own efforts.

All good and certain to be very useful.
.
Three layers of graphene reveals a new kind of magnet

Date:
February 23, 2017
Source:
Tata Institute of Fundamental Research
Summary:
Scientists have discovered the magnetism of electrons in three layers of graphene. This study reveals a new kind of magnet and provides insight on how electronic devices using graphene could be made for fundamental studies as well as various applications.

This is a spectrum of the three layer graphene as a function of magnetic field and density of electrons.
Credit: Biswajit Datta, Mandar Deshmukh
https://www.sciencedaily.com/releases/2017/02/170223114729.htm
Metals have a large density of electrons and to be able to see the wave nature of electrons one has to make metallic wires that are only a few atoms wide. However, in graphene -- one atom thick graphite -- the density of electrons is much smaller and can be changed by making a transistor. As a result of the low density of electrons the wave nature of electrons, as described by quantum mechanics, is easier to observe in graphene.
Often in metals like copper the electron is scattered every 100 nanometers, a distance roughly 1000 times smaller than the diameter of human hair, due to impurities and imperfections. Electrons can travel much longer in graphene, up to distances of 10 micrometer, a distance roughly 10 times smaller than the diameter of human hair. This is realized by sandwiching graphene between layers of boron nitride. The layers of boron nitride have few imperfections to impede the flow of electrons in graphene.

In a study, led by PhD student Biswajit Datta, Professor Mandar Deshmukh's group at TIFR realized just this kind of silence allowing electronic interactions to be observed in three layers of graphene. The study reveals a new kind of magnet and provides insight on how electronic devices using graphene could be made for fundamental studies as well as applications. This work discovers the magnetism of electrons in three layers of graphene at a low temperature of -272 Celsius. The magnetism of electrons arises from the coordinated "whispers" between many electrons.
Story Source:

Materials provided by Tata Institute of Fundamental Research. Note: Content may be edited for style and length.
Journal Reference:

Cite This Page:
Tata Institute of Fundamental Research. "Three layers of graphene reveals a new kind of magnet." ScienceDaily. ScienceDaily, 23 February 2017.
Posted by arclein at 12:00 AM