The US prepares to 'incapacitate' Kim: 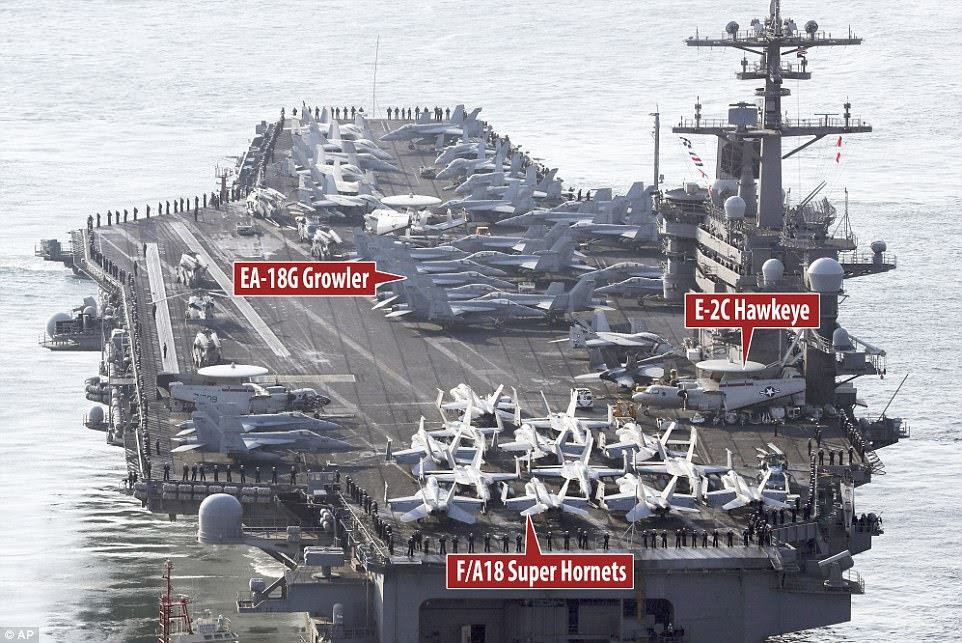 North Korea happens to be the low hanging fruit.  Policy has clearly failed for sixty years to the extent that we actually have seen a succession of insane rulers with zero change in position.  At the same time their population is reduced to serfdom and economic growth is impossible.

Temporarily suspending the cease fire agreement that ended the Korean War in order to reopen negotiations is appropriate. At the same time you enforce a no fly zone and break every window.  Then open by demanding abject surrender.

While this is going on have So Korea offer a handsome retirement package for the No korean officer corp and all other retirees.  That is a powerful carrot.

Wait a while then torch the entire nuclear  infrastructure.

There are still plenty of what ifs to deal with here but a push will work now.
..

A nuclear-powered US aircraft carrier arrived in South Korea on Wednesday for joint military exercises in the latest show of force against the North.

The USS Carl Vinson arrived at the southern port of Busan as US Secretary of State Rex Tillerson began a tour of the region, where tensions have escalated in recent weeks with missile launches from the nuclear-armed North and the assassination of Kim Jong-Un's estranged half-brother in Malaysia.

More than 80 aircraft, including the fighter aircraft F/A-18F Super Hornet, the E-2C Hawkeye and the carrier-based EA-18G Growler are on board the supercarrier.

They claim a military official, who wished to remain anonymous, told them: 'A bigger number of and more diverse U.S. special operation forces will take part in this year's Foal Eagle and Key Resolve exercises to practice missions to infiltrate into the North, remove the North's war command and demolition of its key military facilities.

More than 80 aircraft, including the fighter aircraft F/A-18F Super Hornet (at the front of the carrier), the E-2C Hawkeye and the carrier-based EA-18G Growler (in the middle) are on board the super carrier 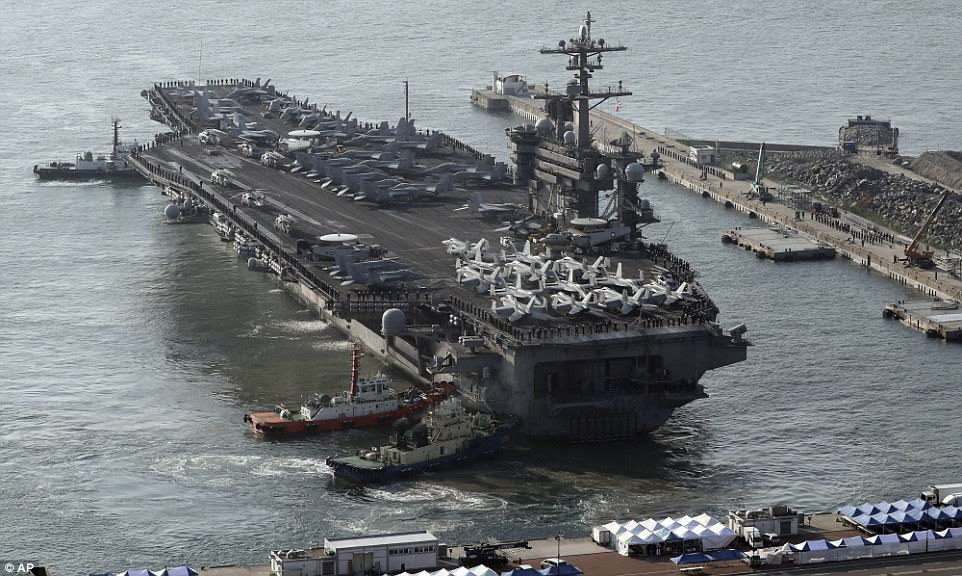 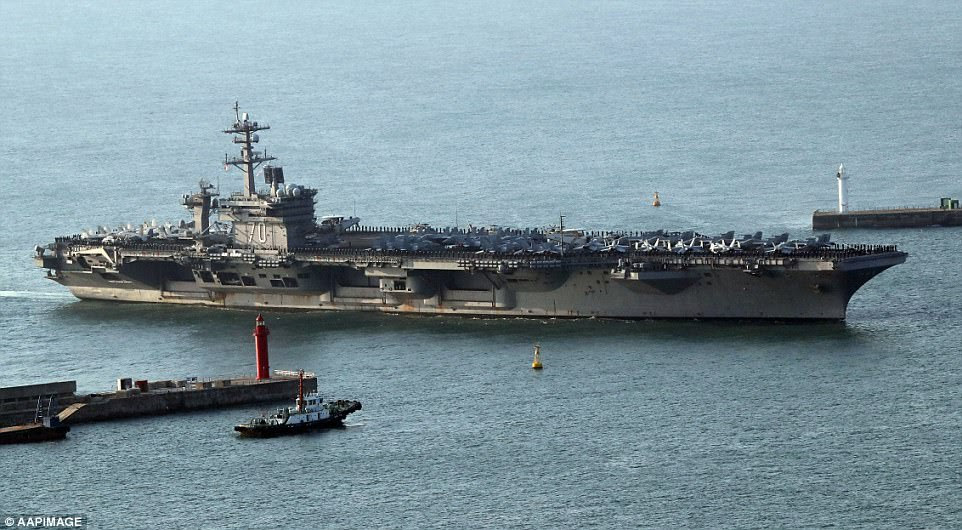 The nuclear-powered aircraft carrier is taking part in South Korea-U.S. joint military maneuvers carried out in the largest scale yet, with North Korea's growing nuclear and missile threats in focus

Armaments: One M61 Vulcan rotary cannon; air-to-air, air-to-surface and air-to-ship missiles
The aircraft carrier and a US destroyer will conduct naval drills including an anti-submarine manoeuvre with South Koreans in waters off the Korean peninsula as part of the annual Foal Eagle exercise.

Washington insist they are purely defensive in nature.

Rear Admiral James Kilby, commander of USS Carl Vinson Carrier Strike Group 1, said: 'The importance of the exercise is to continue to build our alliance and our relationship and strengthen that working relationship between our ships.'

The US has also started to deploy 'Gray Eagle' attack drones to South Korea, a military spokesman revealed on Monday.

The exercise last year involved about 17,000 American troops and more than 300,000 South Koreans.

The spike in tensions has concerned Beijing, with China's Foreign Ministry calling on all sides to end 'a vicious cycle that could spiral out of control.'

North Korea, which has alarmed its neighbours with two nuclear tests and a string of missile launches since last year, said the arrival of the US strike group was part of a 'reckless scheme' to attack it.

The North Korea's state KCNA news agency said: 'If they infringe on the DPRK's sovereignty and dignity even a bit, its army will launch merciless ultra-precision strikes from ground, air, sea and underwater.

'On March 11 alone, many enemy carrier-based aircraft flew along a course near territorial air and waters of the DPRK to stage drills of dropping bombs and making surprise attacks on the ground targets of its army,' KCNA said.

Last week, North Korea fired four ballistic missiles into the sea off Japan in response to annual U.S.-South Korea military drills, which the North sees as preparation for war.

The murder in Malaysia last month of North Korean leader Kim Jong Un's estranged half-brother has added to the sense of urgency to efforts to get a grip on North Korea.

Visiting the headquarters of an army unit early this month, Kim praised his troops for their 'vigilance against the US and South Korean enemy forces that are making frantic efforts for invasion', according to the North's official KCNA news agency.

Kim also ordered the troops to 'set up thorough countermeasures of a merciless strike against the enemy's sudden air assault', it said.

US Secretary of State Rex Tillerson is due to make his first visit to South Korea on Friday.

The threat represented by North Korea's growing nuclear and missile arsenal is the main reason for his trip to the region.

Tillerson arrives in Tokyo on Wednesday, moves on Friday to Seoul, which is in the grip of a political crisis, and then travels the next day to Beijing to hold talks with President Xi Jinping and other officials.

Last week, the U.S. ambassador to the United Nations said President Donald Trump's administration was re-evaluating its North Korea strategy and 'all options are on the table'. 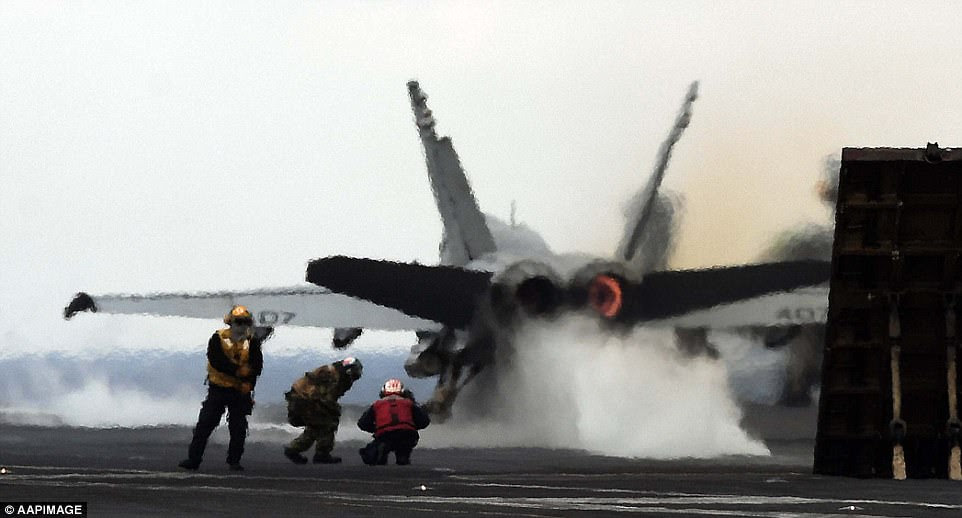 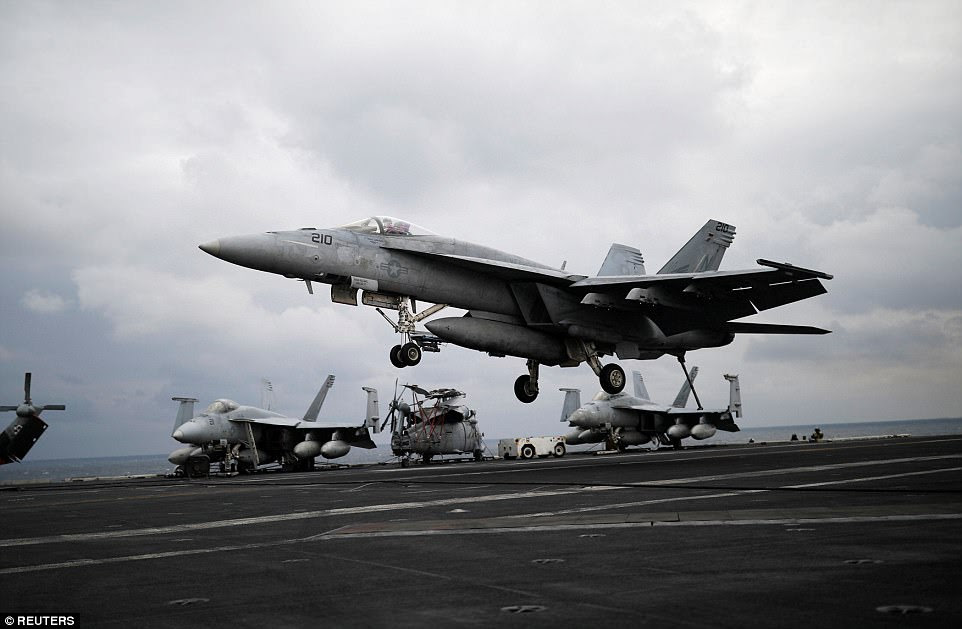 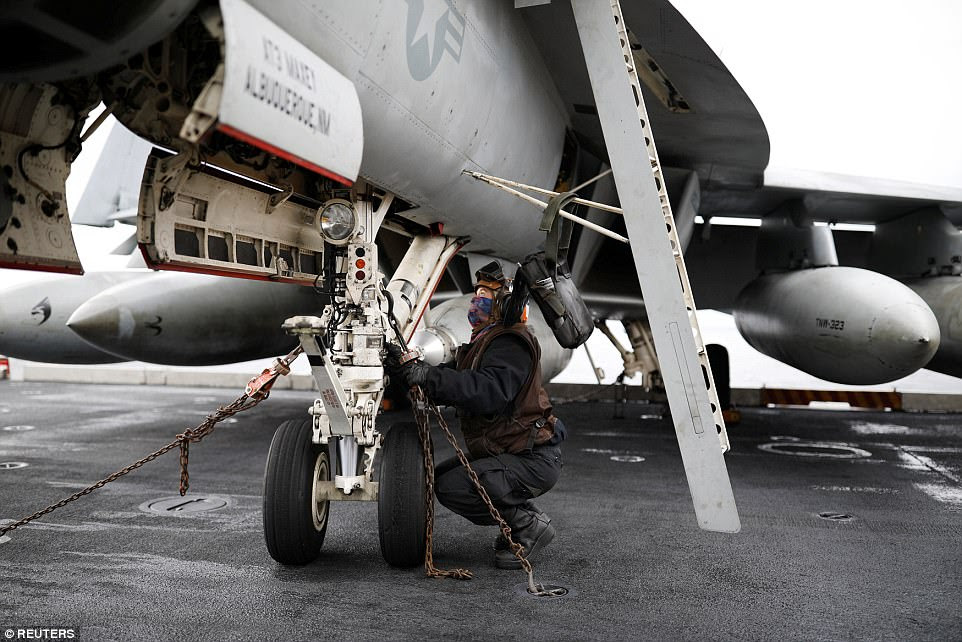 A U.S. Navy crew member works on a U.S. F18 fighter jet on the deck of USS Carl Vinson 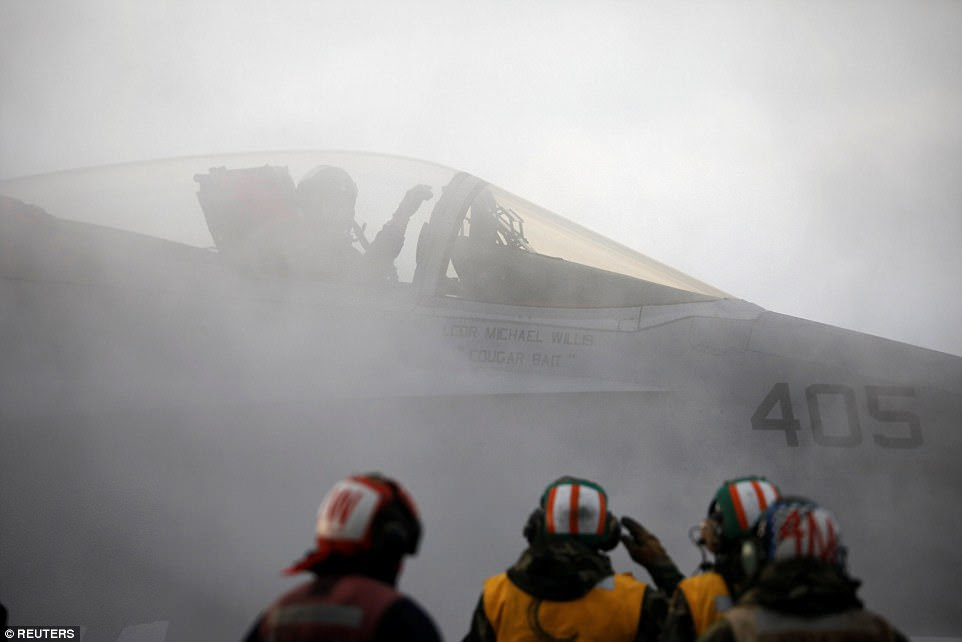 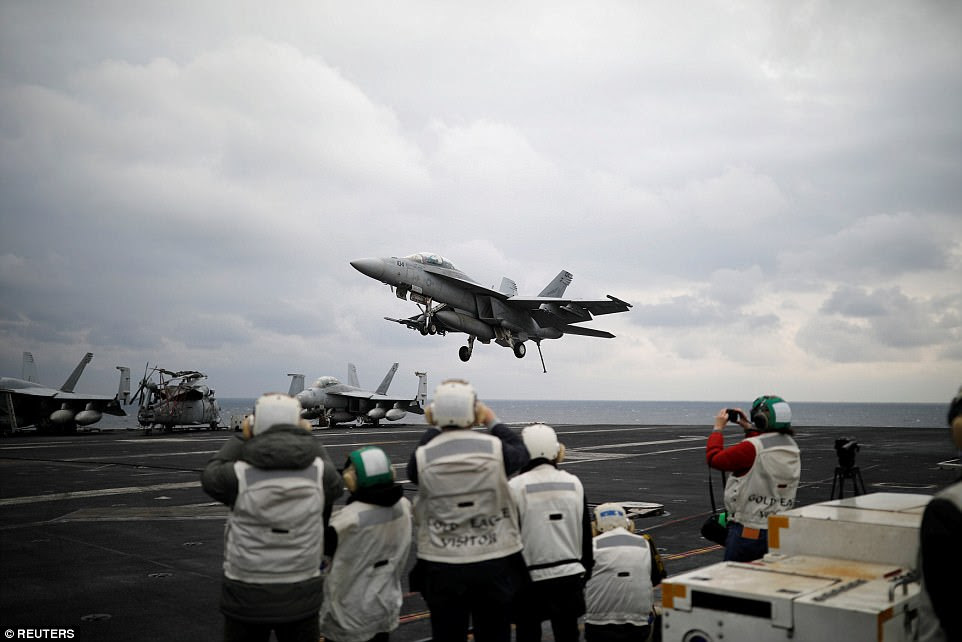 South Korean and U.S. troops began the large-scale joint drills, which are billed as defensive in nature, on March 1

The all-weather E-2 Hawkeye airborne early warning and battle management aircraft has served as the 'eyes' of the U.S. Navy fleet for more than 30 years

PLANES ON THE USS CARL VINSON

The Carl Vinson has been involved in a number of notable events including Operation Iraqi Freedom. The ship also received huge attention in 2011 when the body of Osama bin Laden was buried at sea from its deck.

More than 80 aircraft, including the fighter aircraft F/A-18F Super Hornet, the E-2C Hawkeye and the carrier-based EA-18G Growler are on board the supercarrier.

As part of his plans to bolster the military, President Trump has vowed to expand the number of carriers the US fields from 10 to 12.

And he promised to bring down the cost of building three 'super-carriers,' which has ballooned by a third over the last decade from $27 to $36 billion.

The joint exercises involve tens of thousands of troops, as well as strategic US naval vessels and air force assets