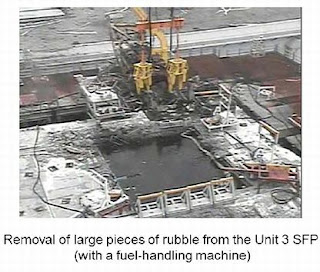 By now is should be obvious that we cannot build nuclear heat engines safely using the most commonly operated systems.  I suspect that the Candu design come closest to an inherently safe system.

At Fukushima, it is not obvious that they were able to extract much of the fuel at all.  The only thing that we can be sure of is that the folks in charge have been lying and stonewalling while attempting to soldier on.  I think that they are still trying to simply recover spent rods outside the reactors.

What we knw now is that years of serious effort is ahead of us.
.
.

When the Fukushima Daiichi nuclear power plant in Japan suffered a triple meltdown in 2011, people around the world were understandably in a panic about the environmental and health impact of the crisis. Throughout the following year, consistent reports of the disaster spread across newswires, shocking the public with the extent of the damage and ongoing radioactive contamination.

Even so, the situation gradually began to fade into the background as years passed and other news took center stage. But the problem of Fukushima hasn’t gone away. In fact, it’s become much more serious. In early February of this year, extremely high radiation levels recorded within the plant have brought us face-to-face with the reality that Fukushima continues to be a radioactive nightmare that threatens our environment, ecology and health for generations to come.

On March 11, 2011, a huge tsunami slammed into Japan’s northeast coast, which left more than 20,000 people dead or missing and caused the meltdown of three reactors at the Fukushima plant. It was the worst nuclear accident since Chernobyl in 1986.

Last December, Japan’s government announced the total estimated cost of the disaster will reach 21.5 trillion yen ($190 billion) — including compensation, decommissioning and decontamination of the surrounding area, as well as storing radioactive waste. The work of dismantling the plant is slated to begin in 2021 and is expected to be take four decades to complete, in the year 2061 — half a century after the initial meltdown.

With the latest radiation reading of 530 sieverts an hour, described by experts as “unimaginable” and far higher than the previous record in 2012 of 73 sieverts an hour, the extraordinary task of decommissioning the plant, and the obstacles confronting thousands of workers, is staggering in its scope.

To put this in perspective, a single dose of one sievert is enough to cause radiation sickness and nausea, while 5 sieverts will kill half of those exposed within a month. One dose of 10 sieverts proves to be fatal within a few weeks.

Tokyo Electric Power (Tepco), the facility’s operator, said the atmospheric readings were recorded inside the containment vessel of reactor No 2. Moreover, image analysis revealed a 6.5 foot (two-meter) wide hole in the metal grating beneath the reactor’s pressure vessel. Tepco believes the hole was created when nuclear fuel melted and penetrated the vessel after the back-up cooling system failed.

“It may have been caused by nuclear fuel that would have melted and made a hole in the vessel, but it is only a hypothesis at this stage,” Tepco’s spokesman Tatsuhiro Yamagishi told AFP. “We believe the captured images offer very useful information, but we still need to investigate given that it is very difficult to assume the actual condition inside.” [source]

With such dangerously high levels of radiation, efforts to safely dismantle the plant have become increasingly complicated. According to official reports, authorities are not even sure why radiation levels are surging to such dramatic levels.

Tepco plans to send a remote-controlled robot into the No 2 reactor containment vessel to gather additional information. The robot is designed to withstand exposure to a total of 1,000 sieverts, meaning it would survive for less than two hours before malfunctioning.

Even though it’s suspected that melted fuel has accumulated at the bottom of the damaged reactors’ containment vessels, engineers have been unable to accurately determine the state of the fuel deposits, because of the dangerously high radiation levels.

In early February, Tepco released images of dark lumps which were found beneath reactor No 2. It’s believed these are melted uranium fuel rods. However, the firm has yet to isolate the location and condition of melted fuel in the other, severely damaged reactors. Removing it safely represents a challenge unprecedented in the history of nuclear power.

Preserving Your Health in an Age of Nuclear Crisis
With the Fukushima radioactive horror still going strong, this is not the time to let your guard down and become lax in taking precautions. Dr. Joseph Mercola offers these suggestions to help keep you safe.
Spirulina is one of the best foods you can take to protect against the effects of radiation. Research published in the Journal of Applied Phycology found the following benefits:

“Up to very recently, the interest in Spirulina was mainly in its nutritive value. Currently, however, numerous people are looking into the possible therapeutic effects of Spirulina. Many pre-clinical studies and a few clinical studies suggest several therapeutic effects ranging from reduction of cholesterol and cancer to enhancing the immune system, increasing intestinal lactobacilli, reducing nephrotoxicity by heavy metals and drugs and radiation protection.”

And this animal study in China discovered that “spirulina has chemo-protective and radio-protective capability, and may be a potential adjunct to cancer therapy.”

According to Dr. Mercola, spirulina is protective because it contains 16 percent phycocyanin content — a blue pigment that bonds with heavy metals like cesium and strontium, and then safely expels the radioactive metals from the body.

Additionally, he recommends:
For more tips on how to protect yourself from radiation, see here and here.

Article sources
About the author:

Carolanne Wright enthusiastically believes if we want to see change in the world, we need to be the change. As a nutritionist, natural foods chef and wellness coach, Carolanne has encouraged others to embrace a healthy lifestyle of organic living, gratefulness and joyful orientation for over 13 years.