Former CIA director: ‘We kill people based on metadata’ 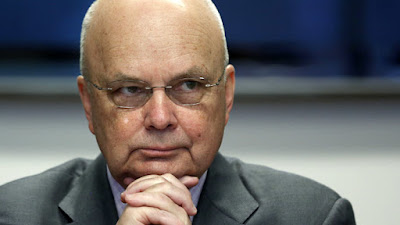 We need to be conscious of this.  The only secure venue is still a private conversation however conducted.  Everything else is stored in a data base and available for review and interpretation.

Of course, private conversations can be intercepted, but that is expensive and will only happen once they already know your act and it is time to build a case.  Otherwise they do not have the information.

In the meantime, electronic surveillance has been turned into an effective weapon as a leader must be in contact with his key people om a timely basis.  This spits out a natural pattern  that differs from that of soldiers.  Thus targeting becomes easy and even organic.

Identification is still important but once partially achieved any movement confirms what is suspected.  Local leaders are just that.  they remain local..
Former CIA director: ‘We kill people based on metadata’

At a recent debate concerning the National Security Agency’s bulk surveillance programs, former CIA and NSA director Michael Hayden admitted that metadata is used as the basis for killing people.

The comments were made during a debate at Johns Hopkins University, after Georgetown University Law Center professor David Cole detailed the kind of information the government can obtain simply by collecting metadata – who you call, when you call them, how long the call lasts, and how often calls between the two parties are made.

Although NSA supporters often claim such metadata collection is permissible considering the content of the call is not collected, Cole argued that is not the case, since the former general counsel of the NSA, Stewart Baker, has already stated metadata alone is more than enough to reveal vast amounts of an individual’s personal information

Writing in the New York Review of Books, Cole elaborated (you can also watch his explanation around the 14 minute mark of the embedded video):

“Of course knowing the content of a call can be crucial to establishing a particular threat. But metadata alone can provide an extremely detailed picture of a person’s most intimate associations and interests, and it’s actually much easier as a technological matter to search huge amounts of metadata than to listen to millions of phone calls. As NSA General Counsel Stewart Baker has said, 'metadata absolutely tells you everything about somebody’s life. If you have enough metadata, you don’t really need content.'

“When I quoted Baker at a recent debate at Johns Hopkins University, my opponent, General Michael Hayden, former director of the NSA and the CIA, called Baker’s comment 'absolutely correct,' and raised him one, asserting, ‘We kill people based on metadata.’”

Hayden paused after making this statement – around the 18 minute mark of the video – and then qualified it by adding, “but that’s not what we do with this metadata.”

Presumably, when Hayden emphasizes “this metadata,” he is referring to the information collected from American citizens. As RT reported in February, the US is already using metadata to select targets for drone strikes around the world. In a report for the Intercept, an unnamed drone operator – backed up by documents leaked by Edward Snowden – said the agency analyzes metadata as well as mobile-tracking technology to determine targets, without employing human intelligence to confirm a suspect’s identity.


“People get hung up that there’s a targeted list of people,” the operator said. “It’s really like we’re targeting a cell phone. We’re not going after people – we’re going after their phones, in the hopes that the person on the other end of that missile is the bad guy.”

According to Cole, the realization that the NSA is collecting such vast amounts of information has prompted action from both Democrats and Republicans in Washington. Last week, two committees in the House of Representatives recently voted unanimously to support the USA Freedom Act, which would bar the NSA from collecting metadata in bulk. The data would remain in the possession of telecommunications companies, only to be accessed by the government if it can prove reasonable suspicion to the Foreign Intelligence Surveillance Court.

As noted by Cole, however, the bill doesn’t address all the facets of the NSA’s surveillance program. As its currently written, the Freedom Act only applies to American citizens, not foreigners who are also under surveillance, nor does it address what he termed the NSA’s “guerilla-like tactics of inserting vulnerabilities into computer software and drivers, to be exploited later to surreptitiously intercept private communications.”

As RT reported previously, the NSA designed at least two encryption tools offered by the security firm RSA – one of which was made the default option, and which allowed the NSA to easily infiltrate computer security systems.
Posted by arclein at 12:00 AM

I suppose the CIA can kill whomever it wants because the 5th commandment doesn't apply to our CIA or to the U.S. Government or to the American people. Guess that God Almighty exempted Amerikanskis from the commandment "thou shalt not kill". We killed John Kennedy with bullets through the throat (front), back (shoulder blade), right-front temple and lastly, through the back of the head. We killed over 3 Million Cambodians, Vietnamese and Laotians according to McNamara, Secretary of Defense. We killed over 27,000 Vietnamese civilians with one shot through the back of the head according to the CIA's own documents. We killed over half a million Iraqi children five-years and under according to our own Secretary of State and the U.N. Kill, kill, kill -- we are good at that. We sponsored Iraq and then Iran in the Iran-Iraq war (over 500,000 dead) and then shot down an Iranian passenger jet in Iranian airspace with 290 civilians killed. No apology needed. We destroyed a country (Iraq) based on our premeditated lie with who-knows-how-many hundreds of thousands dead. "We kill people based on metadata." I can only hope there is an Afterlife and guys like this former CIA director, and all like him, are held accountable. I do hope.