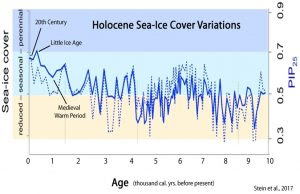 I have spent most of my efforts fpcused on the past several hundred years, simply because we had data.  Thus this result happens to be completely unexpected.

looking at the chart though completely supports my most important conjecture.  It is that the primary cause of the increasing chill in the northern hemisphere is caused by human driven desertification of the Sahara and the Middle East.


Otherwise we see erratics likely caused by geologic events or a cyclic oceanic effect which is not particularly obvious provided this chart is highly accurate.  Over laying all that is the solar variation as well which should be almost undetectable in this type of chart but not so in terms of a temperature chart.  Recall ice cover lags warming as we have just observed..

"Not here to worship what is known, but to question it" - Jacob Bronowski. "Fake and vulgar" climate news from Germany in English - by Pierre L. Gosselin

New Paper Indicates There Is More Arctic Sea Ice Now Than For Nearly All Of The Last 10,000 Years

New Paper Indicates There Is More Arctic Sea Ice Now Than For Nearly All Of The Last 10,000 Years

In a new paper (Stein et al., 2017), scientists find that Arctic sea ice retreat and advance is modulated by variations in solar activity.

In addition, the sea ice cover during the last century has only slightly retreated from the extent reached during coldest centuries of the Little Ice Age (1600s to 1800s AD), which had the highest sea ice cover of the last 10,000 years and flirted with excursions into year-round sea ice.
The Medieval Warm Period sea ice record (~900 to 1200 AD) had the lowest coverage since the Roman era ~2,000 years ago.

Of note, the paper makes no reference to carbon dioxide or anthropogenic forcing as factors modulating Arctic sea ice.

The causes that are controlling the decrease in sea ice are still under discussion. In several studies changes in extent, thickness and drift of Arctic sea ice are related to changes in the overall atmospheric circulation patterns as reflected in the North Atlantic Oscillation (NAO) and Arctic Oscillation (AO). The NAO and AO are influencing changes of the relative position and strength of the two major surface-current systems of the Arctic Ocean.

The increase in sea ice extent during the late Holocene seems to be a circum-Arctic phenomenon, coinciding with major glacier advances on Franz Josef Land, Spitsbergen and Scandinavia. The increase in sea ice may have resulted from the continuing cooling trend due to decreased solar insolation and reduced heat flow from the Pacific.

The increase in sea ice extent during the late Holocene seems to be a circum-Arctic phenomenon as PIP25-based sea ice records from the Fram Strait, Laptev Sea, East Siberian Sea and Chukchi Sea display a generally quite similar evolution, all coinciding with the decrease in solar radiation.

The main factors controlling the millennial variability in sea ice and surface-water productivity are probably changes in surface water and heat flow from the Pacific into the Arctic Ocean as well as the long-term decrease in summer insolation, whereas short-term centennial variability observed in the high-resolution middle Holocene record was possibly triggered by solar forcing.

Robust substantiation for the trends documented in this new Arctic sea ice record comes from a 2005 paper by Lassen and Thejll entitled “Multi-decadal variation of the East Greenland Sea- Ice Extent: AD 1500-2000.” Shown below is an annotated graph from the paper revealing Iceland’s sea ice cover during the last millennium. These scientists also link sea ice variations to solar activity, namely solar cycle length. Notice the direct correspondence between the Arctic trends as a whole (from Stein et al., 2017) and the trends for Iceland. 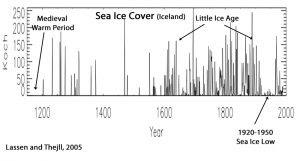 [W]e find that the recently reported retreat of the ice in the Greenland Sea may be related to the termination of the so-called Little Ice Age in the early twentieth century. We also look at the approximately 80 year variability of the Koch [sea ice] index and compare it to the similar periodicity found in the solar cycle length, which is a measure of solar activity. A close correlation (R=0.67) of high significance (0.5 % probability of a chance occurrence) is found between the two patterns, suggesting a link from solar activity to the Arctic Ocean climate.

The ’low frequency oscillation’ that dominated the ice export through the Fram Strait as well as the extension of the sea-ice in the Greenland Sea and Davis Strait in the twentieth century may therefore be regarded as part of a pattern that has existed through at least four centuries. The pattern is a natural feature, related to varying solar activity. The considerations of the impact of natural sources of variability on arctic ice extent are of relevance for concerns that the current withdrawal of ice may entirely be due to human activity. Apparently, a considerable fraction of the current withdrawal could be a natural occurrence.

- See more at: http://notrickszone.com/2017/03/02/new-paper-indicates-there-is-more-arctic-sea-ice-now-than-for-nearly-all-of-the-last-10000-years/#sthash.DHZBYDgy.LvSx4fek.dpuf
Posted by arclein at 12:00 AM