Trump Defiles the Sanctity of Government, and It Drives the Center-Left Mad 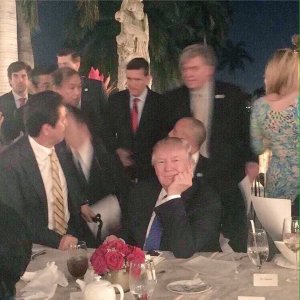 This is actually a clear perspective on what is actually opposing the Trump presidency.  Very helpful.

I am sure that at the top of the agenda for Trump is to make the State effective.  While waiting for fresh programs to be constituted he will focus on shedding dead wood.  That will include whole departments long past their due date.  This can be an ongoing process and one he has surely applied many times in business. Yet it is never the main event.

However the main event has not happened yet and this will shock the world.


Otherwise, he is actually a clean slate in terms of public policy and is willing to listen to alternatives from alternate sources.  He has ideologues around him but he understands them and still keeps his own council.  I am sure somewhere he even keeps a tame communist.

As Conrad Black recently said, he is extremely smart and tough.  His opponents are not.


Trump Defiles the Sanctity of Government, and It Drives the Center-Left Mad

This frenzy even has a name: Trump Derangement Syndrome.


https://fee.org/articles/trump-defiles-the-sanctity-of-government-and-it-drives-the-center-left-mad/
Has the center-left ever been more apoplectic about a presidency? It can’t have been this nuts even during the Nixon presidency. Every day, their publications fill up with articles that are breathless to the point of hysteria about the disgrace that the Trump administration is bringing to the affairs of government. His incessant tweeting, his violations of protocol, his attacks on the press, and even the very existence of this administration has them in permanent meltdown. Here is an example. I’m leaving the over-the-top language from Charles Blow’s New York Times piece just to provide flavor:


I feel as if we are being conditioned to chaos by a “president” who abhors the stillness of stability. Every day we awake to a new outrage. We now exist in a rolling trauma — exhausting and unrelenting…. This should shock the whole of America out of its numbness. This is outrageous and without precedent… The sheer brazenness of it all is stunning…. It’s all just too much. We need an independent investigator. I don’t trust anything — anything! — coming out of this White House, and I don’t trust this feckless Congress to constrain Trump. This is not about partisanship, but patriotism. We must protect this country from moral corrosion, at best, and actual destruction, at worst. If this doesn’t stink to you, your nose is broken.

Yes, I know you have read something similar a thousand times in the last months. You have seen it on television stations, pretty much 24/7. Or you can turn on National Public Radio and listen to the same all day.

Or consider after Trump fired FBI director James Comey. The headlines by midnight all screamed: Crisis of Democracy! But I woke up the next morning and failed to see the evidence. The banks were open. People were buying chicken biscuits at the convenience store. The kids were getting dressed for school. Everything seemed normal.

It’s remarkable. This frenzy even has a name: Trump Derangement Syndrome. It is an identifying state of mind. It has particular symptoms.

To be sure, I read these pieces and don’t entirely disagree with the particulars of the analysis. In none of our lifetimes have we seen anything like this. The stodgy, serious, protocol-driven attempt to bring high dignity to this office has been a main concern of government. When it came out that Bill Clinton was using his power and office for private pleasures, it rattled the establishment, not because of his sins but because his behavior elicited ridicule from the public.

We had no idea of what was coming!

But there is something off about this center-left tendency. These commentators are driven to wild apoplexy by Trump, but not for the reasons I would normally cite. I don’t like his trade theories, his views on immigration, his shabby understanding of the problem with American health insurance, his ramping up of the police state, or his foreign policy. I was calling him out on all of this as early as July 2015.

Their complaints are contradictory.
They, on the other hand, seem to object to the very existence of Trump, his every utterance, his actions no matter what they are, and everything related to this new administration. Their complaints are contradictory. He is terrible because he is doing terrible things! He is terrible because he is not really doing anything! This presidency is destroying the world! This presidency is all sound and fury and nothing else!

It finally struck me why. For this crowd, all their hopes and dreams are bound up with particular political processes, outcomes, and institutions. The state is their favorite tool for all the good they aspire to do in this world. It must be protected, guarded, defended, celebrated. The illusion that the government is not a taker but a giver and the source of all good things must be maintained. The gloss of the democratic process must be constantly refurbished so that the essential sanctity of the public sector can be constantly cited as the highest calling.

Above all else, the president is supposed to represent. His duty is to reflect and broadcast this sensibility.

This View Has a Name

Writing in 1944, Ludwig von Mises wrote that the debate over the future of freedom is not only about beating back socialism, communism, fascism, interventionism, and so on. There is broader discussion to be had. The core problem is the ideology of statism, a word he took from the French term etatism. It identified a view that the state should always and in everything be the central power, organizing principle, and spiritual core of any society. It must be the final judge, the final arbiter, the center of our loyalties, the one indispensable institution because it alone is deserving of our highest devotion and ideal. It must be forever built, larger and larger, taking on ever more responsibility and taking ever more money and power from the rest of us.

The president is supposed to at least pretend to be the high priest of the statist religion. That's his job, according to this outlook.

Everything seemed to being going so well under the Obama administration, which was so earnest, so decorous, so civil. He was funny, smart, respectful of process, and sincere in his pronouncements. He ran on hope and change but governed as the person who kept hope for a new freedom and any radical change at bay.

Change in the Matrix

Trump has profoundly disturbed the balance. He overthrew the respective establishments of two parties, tore right into the legitimacy of the national press, humiliated every expert who predicted his demise, and is now stumbling around Washington like a bum in a jewelry store. He is not actually cutting back on the size of the state; he is doing something even more terrifying from the center-left point of view: he is ruining the mystery of the state, and thereby discrediting their holy institutions.

Trump is not a liberator in any sense.
After the election, I wrote that this might be our 1989. What I meant is that major aspects of what we always thought would be true were suddenly not true any more. New possibilities have opened up. An older establishment has been discredited if not overthrown. What comes next is another matter. Trump is not a liberator in any sense. His temperament suggests the opposite. It was he who famously said in the campaign: “The nation-state remains the true foundation for happiness and harmony.” Moreover, and in many ways, the deep state has regrouped and bitten back to avoid losing power and influence in Washington.

Even so, he is everything that the center-left fears most, a person who works, despite himself, to discredit the thing they love the most. He has demoralized them beyond consoling. Now we are seeing talk of impeachment. This seems to be some people’s last hope for saving the old faith.