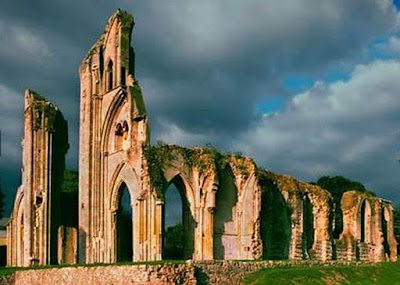 This is the ongoing service honoring the deceased and now recognizing his inheritor.  Quite dramatic and seriously consistent and providing real comfort as the reality of the afterlife is understood by all.

This whole tradition has been completely lost, but clearly has real validity and could well be adopted again with good conscience.  Of course it was lost and even suppressed with the destruction of the Alexandrian library which explains why so much is intact here.  The Kolbrin material was actively maintained there until around the fifth century AD.

Thus migration to Glastonbury is very credible. We are talking of a few centuries of monks maintaining a tradition and protecting it from mere archiving as would be expected from the Vatican....  .

Behold, one comes wearing white sandals and clad in fine linen. Arise, stand up to greet him. He bears the staff of righteousness. He brings a pearl of priceless value, take it and become perfect.

Others come, fair women and young children. His father's heir has come and the four great ones who bear sweet waters, who spread the feast and rejoice under the strong arm of their protector. He who has gone is not forgotten, but this is the day of the living.

He who has inherited ceases from weeping and begins to smile, the protecting one comes in peace. The heart in the sky is no longer small, it expands, it grows large. Thus it is also with the heart of he who lives, his days of lamentations are over and his heart swells and grows large.

The good son never ceases from faithful service on behalf of the absent one who has escaped from the confinement of the body. The dutiful son now calls upon the absent one for protection from wandering shadows and fi-om the molestations of life Shadows.

O Bountiful, Ever Considerate One, hear the words of your faithful and dutiful son, as they ascend with the blue, penetrating smoke of fragrant incense. Let no shadow wander from your safe abode to haunt our habitations, for they who dwell therein have done you no dishonour. Safeguard the Dark Doorway, that things in vile forms come not near us to pollute our bodies with sickness and disease.

You left, and before the waters rose again the man of Shodu, he who dealt harshly with the widow dwelling beside the channel of black stones, departed for his judgement. Is not he whom you judged, and did you not deal rightly with him when the scales went down against him? Therefore, might he not return from the Region of Darkness with others of his kind and cause misfortune to fall upon us? You he cannot harm, you are now in the Place of Glory, in the land beyond theWestera waters. Therefore, send us guardians from among the Glorious Company, that they may spread protecting wings over our habitations.

Many come, bearing cakes of fine meal and barley cakes, large, fat-bodied fish and meats of many kinds, honeywine in jars and fruits in plenty. He who is absent from the feast is joyful.his arm is strong and he issues his commands to the guardians. Cast off all gloom and be joyful, for this is not the time of sorrow, and tears have no place in your eyes.

If there be benevolent Life Shadows beyond the protective pale, they may enter. Join with us in our rejoicing. Let us all enjoy what we have and what we share, for life is irrepressible.

These are things from a foreign place said for our brother Gwelm, according to the rites of the Sons of Fire, and thus it shall be for those who enter the chambers of stone.
Posted by arclein at 12:00 AM