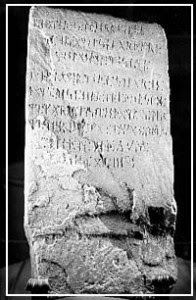 Now that we have  a better grasp of the Viking presnce in North America ,it is possible to revisit the Kensington Stone.that had

I originally read a book on this stone back in the sixties.  At the time it was very much an outlier  that had  little context. Yet the tale of a farmer able to produce autentic twelveth century runes was patent rubbish when it is impossible to find someone able to write elizabetian  scrip today.

During the past two decades, the internet has allowed many disparent lines of inquiry to merge and we find below the historical surface a robust Viking Presence in North America that was hardly tentative at all and was part of the Norse polity as was England until after Canute.

We have discovered  a sustained presense on Vancouver Island as well as the large presence in James Bay at the time of the Kensington Stone.  ThustheStone is surely real and is now simply confirmation of that presence which ultimately moved to the Black Hills..
.

SCOLL down under ARTIFACTS to KENSINGTON under RUNESTONE

Note these words in the paragraph:

These words are evidence that the museum staff still has the NEW WORLD paradigm in their heads. The museum's staff is reluctance to claim the Kensington rune stone for what it is, which is a stone punched with runes in the 14th century and found in Minnesota. This reluctance to accept physical evidence diminishes the importance of the valid artifact.


If the museum staff knew the LENAPE history, which also tells of the same event, the paragraph might read:


"We have the Kensington Runestone in our museum. The Runestone and the historic knowledge of its origin continues to be the hallmark of the Runestone Museum. This enduring artifact was discovered in 1898, clutched in the roots of an aspen tree on the Olof Öhman farm near Kensington, MN (15 miles southwest of Alexandria). The Runestone has led researchers from around the world and across the centuries to a an understanding of how a runic artifact, dated 1362, could show up in North America."

The museum should add the following:

The “ten mates dead” appear to have been waiting on shore with boat loads of supplies when they were ambushed by a band of hungry, desperate thieves from the nearby woods.


This episode was recorded in the rune stone by a Swedish stone puncher and a LENAPE historian using self-verifying stanzas. The date, AD 1362, is important because the date fits the known Norwegian history, and other artifacts left behind by the Norwegian rescue mission. The date pins down the LENAPE history, which, at that time, was being recorded one stanza per year.


Thus for nearly a century the LENAPE history records the dates of historical events of North America in the 14th and 15th centuries.

Now, go back to

Do not listen to the guy saying “hoax." Pay attention to the people responding to him.


This film was suppressed for 31 years. The suppressors may have been motivated to their action because they had the NEW WORLD paradigm in their heads. Two generations of kids did NOT get to see the VIKING VISITORS video.


In Canada, the race distinction between English and “Aboriginals” continues, with the descendants of Catholics still treated like "Aboriginals."

Patricia Sutherland, who revealed many artifacts of ancient Norse, was fired. The Civilization of Man was dismantled. Twelve hundred professors were fired. Suppression by omission appears to be the continued government policy in Canada.