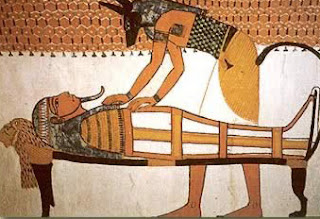 This is a description of the spirits departure and arrival in the afterlife.  Better yet we discover the rational for mummification.  They thought that a ghost remained behind to trouble people and this is separate from the living spirit.  These ideas remain extant but not so clearly realized as with the Egyptians.

This work clarifies what we presently understand about Egyptian funeral practices.


There was much poorly understood but this short piece does make good sense of it.  Close reading of this and other sources should allow a full reconstruction.

The writings of Garmi were brought by the hands of Nadayeth The Enlightener, of the twin cities whence come the Sons of Fire, when he fled the wrath of kings. He spread out before the Learned Ones beauteous things of many colours and spoke to them after this fashion, and I, Lavos, recorded it in the tongue of the Sons of Fire:

[ a simple enough description of the afterlife without the detail and is noted.  arclein ]

The Aspiring One has embarked on the waters of illusion, his craft is afloat but it has not yet reached the shores where the promise of new life is fulfilled. Now he is guided by two beings, one a lovely maiden and the other an ill-visaged man. These two strive one with the other, each grasping one side of the craft, now it overturns. The maiden seeks to drag the Aspiring One dovm, while the ill-favoured man seeks to keep him afloat. But the Aspiring One struggles against him. They come to the sands of the shining shore where the Light of Truth turns the maiden into a vile-faced hag and the man into a handsome youth. The Aspiring One lies on the sands of Shodew as one dead, for he had fought against the man who sought to save him.

[ the aspiring one is a newly departed soul or spirit. - arclein ]

The Beauteous One comes attended by handmaidens, and with them are the companions of the Aspiring One's earthly life. There, too, is his soulself, awaiting his embrace. The Aspiring One lies as dead, for he did not know his saviour. They who stand about, who are The Welcomers, wait in uncertainty. The Beauteous One bends over the prostrate man and says, "Revive, this is not a place where death rules". He moves and she says, "Raise yourself and cast away the residue of your mortality".

This is The Herald, he stands between this man and his Kohar, and they, together with The Adjuster and The Welcomers, go to the Hall of Judgement and stand before The Lord of Life, The Master of Destinies. Now come The Lords of Eternity who are The Lesser Gods, and they enter the Gates of Splendour. The Balancer comes from his secret place. The Greeter to Darkness stands at his door and The Greeter to Splendour stands at his door, they face each other. The Welcomers, compatible companions of this man's earthly life, stand about, they are there, in the Hall of Judgement.

The Balancer causes two fluid-like, fluctuating columns which stand on either side of the Kohar and one takes the form of the Aspiring One, but it is horribly malformed because it mirrors all his wickednesses and weaknesses. The other shines brightly, for it mirrors all his goodness and spiritual qualities. Then the two columns merge back into the Kohar and The Adjuster adjusts with justice and mercy. Then the Aspiring One stands forth in his Kohar and in his true likeness, whicn is a blending together of all his incamational likenesses.

The Aspiring One is drawn towards the right hand door, he passes through and sets foot on the rainbow road. He is accompanied by The Welcomers, the companions of his earthly life who are now revealed to him in their true likeness. They sing, they dance, they rejoice, and there is much gladness in the reunion. The word of Truth is established, it is fulfilled. The ancient promises are fulfilled. He who departs shall return, he who sleeps shall awaken, he who dies shall live. The Aspiring One has passed into the Regions of Glory.

[ a seriously remarkable narritive that takes full stock of our present knowledge of  NDE and other reports from the other side.  It both conforms but also glorifies the experience itself beyond what we have understood.  This may well be an artifact of the writing and oral tradition. - arclein ]

Now, behold the body vacated by the vehicle of life. It slumbers in its death wrappings, for the enlivening spirit has flown. The earthly body alone stays and cannot hold itself together. It prepares to fall apart and decay. The Companions of the Dead take it into their company, it will be made incorruptible and become a communicating door. It is given the things which rightly belong to the dead.

Those who remain on Earth fear the Life Shadow of the One who has gone on before them. The body is bandaged in its death wrappings. It is purified, it is made clean, it is provided with the necessities. Thus, the Life Shadow shall dwell at peace within the empty body, it believes it to be its abode. It shall not wander. O Shadow, do not wander, remain within the tomb, seize any who come to steal, seize any who would break the body, seize any who would open that which is closed. Seize and haunt, seize and haunt!

The Companions of the Dead speak thus, "The Life Shadow of this man who was is never restless, it never wanders, it is ever protecting, it is ever watchful. It remains, for it is bound to the empty corpse by the restraining throngs".

They say, "The spirit of this man has awakened in the Land of Immortality, it rejoices in the Land Beyond the Horizon. He is a Hero of the Horizon. Offend him not by thinking that he is dead, he cannot die, for he is with the Ever Living. He has not gone away to die, he has departed to live elsewhere. Let the moisture of his body return to the waters of the Earth from whence it came. Let the things of hardness in his body return to the dust from whence they came. Let his bones rejoin the stones which once they were".

"Weep not, for your tears and lamentations restrain his eager spirit. Sing the death dirge, that its echoes may sound the toscin in the Region of Light and The Splendid Ones and The Welcomers come to the place of appointment. It is unfitting to force gladness on a sorrowful heart, but be sad only for a temporary parting".

"Let not the earthly body of this man who was, become destitute, surround it with care and affection, so that it may transmit the substance of life. Sustain it, so the Life Shadow remain within".

"What see you now? Gaze upon it, the frail mortal remains enwrapped and silent, unresponsive. Ponder, this you see with the eyes of the body, which cannot perceive things of the spirit. Were the eyes of your spirit opened but a brief moment, you would perceive something entirely different and then you would know that his shining, immortal spirit walks in the company of those risen to glory."

"O departed one risen to glory,who has left us to sorrow. As we have helped you and surrounded you with the protection of our love and our offerings, so now help us in the days of life left to us on Earth."
Posted by arclein at 12:00 AM