A Serendipitous Skull Discovery in Ethiopia: Is This the Oldest Known Modern Man? 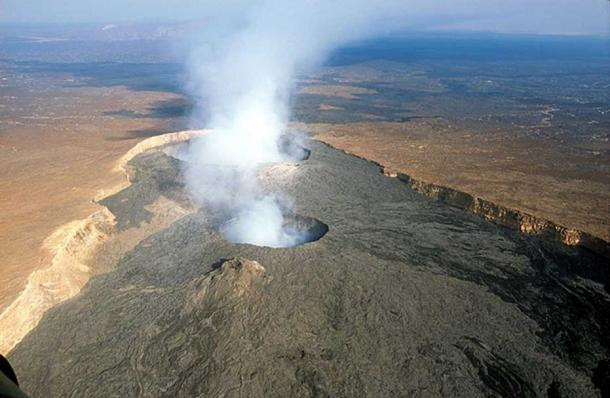 I am pleased to see this as it conforms nicely to the 200,000 year time window set for the first emergence of engineered homo sapiens  in Africa.  These fossils needed to exist.

There is reson to support the conjecture that humanity was deliberately engineered into existence around 200,000 years ago.  The only difference with modern man was that they shared mind to mind communication as do all other animals. This skill was suspended 45,000 years ago in our fall from Eden.

Thus Africa should have a population of modern humans from 200000 BP through 45000 BP that lived an unorganized life way..

.
A Serendipitous Skull Discovery in Ethiopia: Is This the Oldest Known Modern Man?

The El Niño weather phenomenon of 1996-97 wrecked havoc on many parts of the world; however, it also enabled one team of scientists to make an incredible discovery. When the skies cleared and the floodwaters dried, a group of paleontologists in Ethiopia’s Afar region unearthed three human skulls as well as numerous other human bone fragments. After years of reconstruction and analysis, the remains were dated to approximately 160,000 years. The so-called ‘Herto skulls’ were thus older than the closest competitors by tens of thousands of years. Some experts believe they deserve their own subspecies classification: Homo sapien idaltu.

The Afar Research Site: Home of the Herto Skulls

The team consisted of researchers from the University of California, Berkley, and from the Ethiopian Rift Valley Research Service. The state of Afar is located in the northeastern corner of Ethiopia and stretches 27,820 square miles (72,053 km). Yet, the area the paleontologists have for years been particularly interested in is called the Afar Triangle (or Afar Depression), a geological depression caused at the junction of three diverging tectonic plates: the Nubian, Somalian, and Arabian. It is one of the lowest places in Africa and frequently holds the title of the hottest place on Earth. It also has the world’s largest lava lake formed by the most continuously active volcano, Erta Ale. The region is home to the Afar people, considered to be “the toughest people in the world” (Onuh, 2016)

From this region, one of the earliest known hominin fossils was discovered in 1974: a female Australopithecus afarensis known affectionately as Lucy. And here, in 1997, the Herto team discovered the oldest Homo sapien remains.

Erta Ale is an active shield volcano located in the Afar Region of northeastern Ethiopia, within the Danakil Desert. ( CC BY-SA 2.0 ) Remains such as the skulls known as the ‘Herto fossils’ were discovered here.
The Serendipitous Discovery of the Skulls

In 1996-97, El Niño caused punishing rains to fall throughout much of Eastern Africa. The deluge caused many of the semi-Nomadic Afar people, including those of the Herto village, to abandon the Depression for higher ground. The rains caused a good deal of soil to wash into the Awash River, exposing numerous fossils. As a result of the people and herds moving to higher ground, these newly unearthed bones were not trampled and remained undamaged waiting to be discovered.

“When the scientists returned 11 days later, it took them only minutes to find the skulls of two adults, probably male. Six days after that, Dr. Berhane Asfaw of Ethiopia's Rift Valley Research Service found a third, the skull of a 6-or 7-year-old child, shattered into about 200 pieces. After years of painstaking cleaning, reassembly, and study, the team was confident enough to tell the world that it had found the earliest true Homo sapiens — older by at least 1,000 generations than anything previously discovered” (Lemonick and Dorfman, 2003).

Although the child’s skull appeared almost identical to modern human children skulls, the adults showed marked differences. “Each of the adult skulls was remarkably big. ‘We compared this with skulls of 6,000 modern humans, and still after that comparison not one was as big and robust as the Herto male,’ said Tim White, a University of California, Berkeley paleontologist and co-leader of the international team that found and studied the skulls. ‘These were very, very large robust people.’” (Joyce, 2003)

Nonetheless, the skulls are like modern humans in every feature. “The face is flat with prominent cheekbones, but without the protruding brow ridge of pre-human ancestors or Neanderthals. And the braincase is rounded, like a soccer ball, rather than the football shape of earlier human ancestors.” (Joyce, 2003) For this reason, the team proposed calling the remains a subspecies of humans Homo sapiens idaltu, ‘idaltu’ meaning ‘elder’ in Afar. 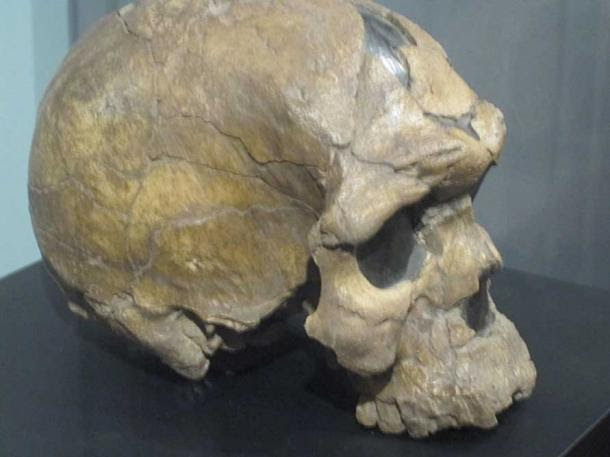 Features of the Skulls

The similarity in features finally puts to rest the long-standing controversy over the origin of modern humans. While it is known that pre-human species left Africa and settled in Europe, the Middle East, and Asia, for decades it was not clear how these pre-human species all managed to develop into the same Homo sapien species. The answer is now clear that modern humans also developed in Africa and also left (most likely due to climate change). The second wave of African humanoids interbred and/or overtook the pre-human species, as can be seen in the well-studied case of the Neanderthals (one of the species that left Africa in the first wave).


“What this discovery in Ethiopia shows is that the shared features of modern humans - our high-rounded brain case, small brow ridges — originated in Africa,” said Chris Stringer from the Museum of Natural History in London” (Joyce, 2003). 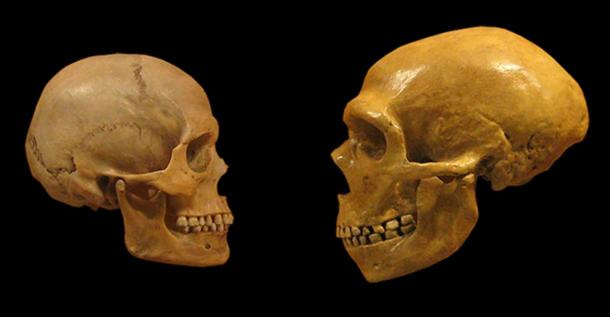 Comparison of Modern Human and Neanderthal skulls from the Cleveland Museum of Natural History. ( CC BY-SA 2.0 )
A Post Mortem on the Ancient Skulls

Perhaps more interesting to the casual reader of paleo-discoveries was the treatment of the skulls immediately after their owners’ deaths 160,000 years ago. Each of the three intact skulls, as well as the (possibly) 10 skull fragments found at the Herto site, bore marks of deliberate tampering after death. Not in a cannibalistic way. Rather, the Herto fossils show the earliest known evidence of mortuary practices.

“Cut marks on the skulls indicate that the overlying skin, muscles, nerves and blood vessels were removed, probably with an obsidian flake. Then a stone tool was scraped back and forth, creating faint clusters of parallel lines. The modification of the child's skull is even more dramatic. The lower jaw was detached, and soft tissues at the base of the head were cut away, leaving fine, deep cut marks. Portions of the skull were smoothed and polished.” (Lemonick and Dorfman, 2003) 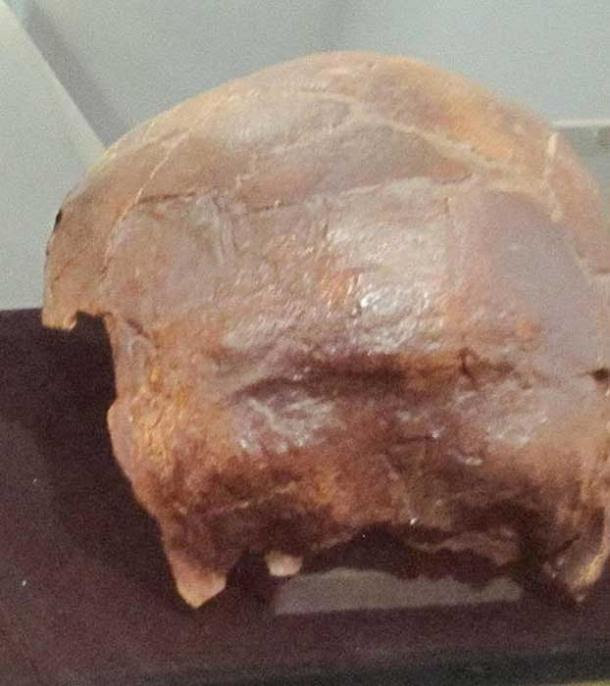 ‘The cut marks aren't a classic sign of cannibalism,’ White said while showing the skulls to a TIME reporter in Addis Ababa. ‘If you wanted to get at the brain in order to eat it, you'd just smash open the skull.’ Instead, he suspects, the scratches might be a form of decoration. As for the polished areas, he says, ‘we know they weren't caused by the environment, because the marks go across the breaks between the recovered pieces. The child's skull looks as though it has been fondled repeatedly.’

‘This,’ concludes White, ‘is the earliest evidence of hominids continuing to handle skulls long after the individual died.’” (Lemonick and Dorfman, 2003)

Top Image: Depiction of what the ancient 'Herto Man' may have looked like. His skull dates to 160,000 years ago. ( Bradshaw Foundation ) Background. (George Hodan/ Public Domain Pictures )