The Fall of the Mycenaean Civilization 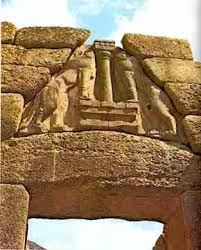 We are visiting this time point for a really good reason.  We know that the Bronze Age ended in 1159 BC.  At the time the Greeks where not in Greece.  Add in the clear point that the Trojan war took place twenty years earlier as per observed star positions found in the Iliad.

What happened in 1159 BC, is that the source of copper ended and this ended the economic raison'etre of the palace factories such as Mycenae.   The copper ingot money disappeared into hoards as a copper reserve for weapons to ultimately reappear as Greek armor centuries later, but not that much later.

At the same time the Greeks who were living in the Baltic suddenly lost their growing season thanks to volcanic activity and the related temperature drop.  Again recall DaVinci's work that clearly places the whole Greek world in the Baltic during the events of which Homer wrote.  It became necessary for a movement of peoples southward after 1159 BC.  This surely occurred in part by sea but for the bulk it meant an overland migration lasting an entire season.

What is reported at Pelos is a combined sea and land assault.  Thus the two arms were certainly coordinated and used to seize lands for the incoming colonists.  This allowed the establishment of their community names in the Aegean.

The time frames are such that they had time to produce their epics and to then migrate when necessary the long land route to the Aegean.


The Fall of the Mycenaean Civilization

Around the year 1200 BCE the Mycenaean civilization shows signs of decline. By 1100 it was extinguished. The palaces were destroyed, and their system of writing, their art, and their way of life were gone. The causes of their decline are not entirely clear. According to Greek legends, they were replaced by half-civilized Dorian invaders from the north. They spoke a different Greek dialect, and were a new wave of Greek migration. Evidence for this may be found in the legend of The Return of the Heraclidae, which recounts how the Dorians joined the Heraclidae, a Greek tribe, in an attack on the Peloponnese.

We get a glimpse of the fall of the Mycenaeans from a tablet found at the palace of Pylos. The palace was destroyed by an invasion from the sea. Most of the tablets recovered there describe preparations for the attack. The first attack involved attacks on the priests but no burning. The scribes had a chance to write about it before the 2nd attack which destroyed the palace.

The enemy grabbed all the priests from everywhere and without reason murdered them secretly by simple drowning. I am calling out to my descendants (for the sake of) history. I am told that the northern strangers continued their (terrible) attack, terrorizing and plundering (until) a short time ago. Py FR 1184 (Michael Ventris translation)


Many of the tablets found at Pylos described preparations for an attack which had obviously been expected from the direction of the sea. Michael Wood in his book In Search of the Trojan War wrote the following:

"One of the most important tablets is entitled: 'Thus the watchers are guarding the coasts' : command of Maleus at Owitono... 50 men of Owitono to go to Oikhalia, command of Nedwatas.... 20 men of Kyparssia at Aruwote, 10 Kyparissia men at Aithalewes.... command of Tros at Ro'owa: Kadasijo a shareholder, performing feudal service.... 110 men from Oikhalia to Aratuwa. Some of the last tablets written at Pylos speak of rowers being drawn from five places to go to Pleuron on the coast. A second list, incomplete, numbers 443 rowers, crews for at least fifteen ships. A much larger list speaks of 700 men as defensive troops; gaps on the tablet suggest that when complete, around 1000 men were marked down, the equivalent of a force of 30 ships".


It was all to no avail. The first attackers appear to have targeted the priests but did no burning. This allowed the scribes enough time to describe the attack on their tablets when the second wave of attackers arrived who devastated the palace with fire and beat anyone they could find. The old story that the Dorians came over land from the north and devastated the palaces may well be true, but they may have done it in cooperation with the Sea Peoples' attacks in boats. The only strangers for which we have good evidence are the Sea Peoples and their main goal was to stop the advance of the new philosophy of the jealous male gods, and not to take slaves or even to plunder, which was incidental. The attacks were successful because, like the Hittite empire, we know that the Achaean civilization came to an abrupt end. Only Athens was apparently able to ward off the attacks.


The kings of Mycenae always had to fight to retain their positions. They engaged in constant warfare with each other and the long Trojan War may have weakened their power.


The great workshops were the first to disappear. By 1200 there were no more luxurious weapons and vases. The archeological evidence is that after 1200 BC there is a massive reduction in settlement sites. When the Dorians arrived, they found an already weakened civilization, which they looted and pillaged. A dark age descended on Greece.


The Question of a Dorian Invasion

The Greeks later believed that, following the collapse of the Mycenaeans, a Greek-speaking group from the north, called the Dorians1, began to invade central and southern Greece. Dorians were especially remembered as the ancestors of the Spartans2, the most powerful city-state on the mainland before the spectacular rise to prominence of Athens in the fifth century B.C. Strikingly, however, archaeology has not discovered any distinctive remains attesting a Dorian invasion, and many scholars reject it as a fiction. The lack of written works from the Greek Dark Age3 means that the mute evidence uncovered by archaeologists must provide the foundation for reconstructing the history of this transitional period
Posted by arclein at 12:00 AM