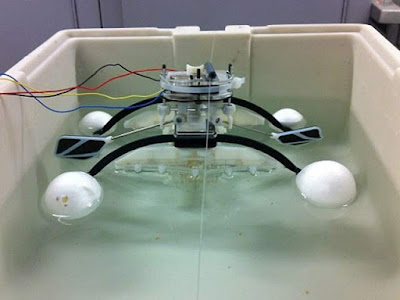 I really think it is wiser to modify life forms to do these tasks.

On the other had we are soon to abandon all oil technology anyway.  All this becomes mute then.

Secondary applications can be then handled by plant products.  This make the whole problem of pollution largely collapse.

Add in a forty year transition to organic agricultural methods and we will have little left to complain about.

Researchers at the University of Bristol may have engineered a new way to clean up our planet’s waterways – with a swimming machine called “Row-bot,” which digests pollution and turns it into electricity for fuel.

“Sometimes, tankers flush their oil tanks into the sea, so oil is released into the sea that way,” said roboticist Jonathan Rossiter, host of a TED Talk that discussed the potential these robots may have. “Wouldn’t it be nice if we could treat that in some way using robots that could eat the pollution the oil fields have produced? So that’s what we do – we make robots that will eat pollution.”
The robot works by ingesting microbes into its microbial fuel cell “stomach,” which is then digested and converted to energy that powers the propulsion and paddles through the boat’s motor. According to Rossiter, the robot can operate continuously for months, generating more energy than it consumes.

This could be incredibly helpful in reducing some of the impacts we’ve made to the environment. Not only can these robots clean up oil from boats and tankers, they can help address other concerns – like the chemicals which are washed away into our rivers, lakes, and streams, and eventually our seas and oceans, generated from our increasing populations and growing demand for food.

Once they’ve made their way to waterways, chemicals like nitrates are absorbed by the organisms living in aquatic environments. This can lead to threats like algae blooms, which occur when algae uses nitrates as fertilizer to mass produce new algae.

“The trouble is that when algae reproduces like this, it starves the water of oxygen,” Rossiter said. “As soon as you do that, the other organisms in the water can’t survive. So what do we do? We try to produce a robot that will eat the algae, consume it, and make it safe.”

Currently, the practical application of Row-bots comes with one major limitation – the robots themselves are not biodegradable. However, Rossiter said addressing this restriction and finding new materials to use for the creation of these robots is one of the goals of the continuing research.

“Current Row-bots contain things like toxic batteries,” he said. “You can’t leave those in the environment, so you need to track them, and then when they’ve finished their job of work, you need to collect them. That limits the number of Row-bots you can use. If, on the other hand, you have a robot a little bit like a biological organism, when it comes to the end of its life, it dies and degrades to nothing.”

Row-bots made from biodegradable materials could then be deployed by the thousands, Rossiter said – or even in millions and billions – put to work with the task of cleaning up the toxic chemicals, trash, dirt, and even disease-carrying organisms in our water.

AI plus the ability to modify itself to consume all pollutants could result in row-bot who would seek to consume the largest polluter - man. With the ability to adapt these water born row-bots could morph into land roving robots feeding on mankind.

What a great plot for sci-fi flick.