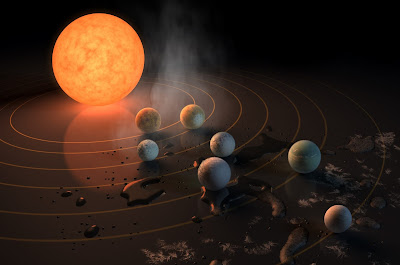 As i posted before these systems generate a metric based on the number of vertices including the star.  That metric then generates a natural identity that the system converges back to in the face of any small disturbance.

It obviously looks like resonance but is integral to the whole system and is the natural stable solution available.  All multi body systems will exhibit this characteristic.

The Globe and Mail

Some 2,500 years ago, the ancient Greek thinker Pythagoras pondered the “music of the spheres” – the notion that the orbital periods of celestial objects like the moon and the planets represent a mathematical harmony that is equivalent to a pleasing sound.

Now astronomers at the University of Toronto have gone one step further, showing that the same idea may be the secret behind the survival of a distant solar system that scientists say could be a viable candidate in the search for life beyond Earth.
Posted by arclein at 12:00 AM