Kolbrin - The Book of Gleanings - Chpt 13 - Way of Yosira 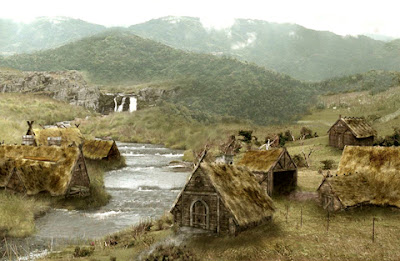 This is a delightful story of Yosira bringing both knowledge and the idea of kingship to a peopled land.  The process has largely continued to this day and it is only recently that the meme of kingship has been replaced by unusual creation of parliment to tap the consent of the demos. This has been facilitated by universal education.

Something of this nature had to occur but this puts names and of course original discovery is still lost in the mists of time in another land far away.

Yet archeology shows us how a new tool kit exploded across the world wheneverit was tamed.  The best example I know is the arival of famers in Italy 6500 BP by boat who went deep inland up a river valley to a nice lake.  Of couse they would.

Yosira taught that within each man resides a little man who is the Lord of the Body, and this is the life of men.

[ this is essentially correct as it describes the spirit body.  What it fails to do is inform us that the information density is millions of times greater than possible with our chemical self. The result is that the word small is associated with this idea and nothing could be further from the truth. - arclein ]

While man sleeps the little man wanders abroad to journey as it will, at death departing from him forever.

The Lord of the Body cannot be seen by mortal eyes, but it is not hidden from all seeing eyes of the Twice Bom.

When departing at death it comes out from the mortal mouth, waiting awhile until it grows celestial wings. Then it flies away to the Westem Kingdom where the wings are shed.

In the place whither it journeys the Lord of the Body needs no earth-made abode, therefore buming the earthly habitations of a Departed One is futile. However, if the habitation remains and it is not purified, it becomes the gathering place for shades arising from the Place of Darkness, for the habitation need not be destroyed, it must be purified by incense and water and refilled with protective hokew.

If a man come upon another asleep, the sleeper must be awakened quietly and with gentleness, so the Lord of the Body may re-enter peacefully. For if the sleeper be awakened before it has re-entered, or if it jump back in fright, then the man will become sick. Therefore, when awakening a sleeper it is well to call gently to the being without.

When the mortal body becomes sickened without the heat of the lukim being present, or if the man or woman be seized and tormented by the Dark Spirits of madness, this may be caused by the daysleeping of the Lord of the Body. Thus, if the Lord of the Body be awakened from its daysleeping, or restored from its restlessness, then the man or woman may be cured. These things Yosira permitted to be done after the fashion of charmers.

Yosira taught the curing of many kinds of ills within the mortal body and the use of draughts containing the life of herbs and growing things. He used fire to stop life leaving the mortal body. The manner of effecting these things is written in the Book of Medications.

When Yosira came with his sons into the land of Tamuera, the people there dwelt in darkness and they were ignorant of all knowledge. They were divided among themselves into many kindreds, and strife was frequent.

They had no kings and only the old men ruled. There were many charmers who ruled the people by delusions and also those called the Keepers of Customs and the Teller of Tales.

One people dwelt among great trees and thick forests in the midst of swamplands. Their habitations were made of reeds and stood upon high platforms. These people were called the Children of Panheta, for he was their god in the days following those during which men were first created in the midst of the waters.

Another people dwelt beyond reach of the waters and away from the trees, and they were nameless. They dug holes for their habitations or sought abodes in caves within the hillsides. This people had no gods but worshipped the Dark Spirits and the Kamawam of the forest which seized men at night. When the men who had been seized returned to their kindred, they were without words, being dumb. They died in the midst of madness, tearing at their bodies. But there was no Kamawam in the forest, this madness being the work of charmers wishing to instil fear into the hearts of men.

This is the manner in which it was brought about: When the charmers seized men at night they took them to a secret place where their tongues were pierced well back with thin thorns. Thus the tongue swelled up, so they whose tongues were so pierced lost the power of speech. The charmers also pierced the victims about the waist with slivers of wood, so none could discover where they were inserted. They drove other splinters into them at the bridge between the private parts and the rear chaimel, and none could discover them there and know the victim was pierced with thorns and splinters.

Yosira cursed all the charmers who practised this evil with a great curse, so they were driven to madness by a demon which ate away their bellies. Since then the Kamawam has been known no more in the land.

Yosira taught men to beat metal out of stones and to bum stones, so that they gave up their heart. He taught men to work with clay and he taught them the weaving of cloth and the making of beer.

When Yosira came into the land, the people knew nought about the cutting of water channels and the sowing of com, but Yosira taught them these things. It was he who brought fertility to the land; it was he who died in the midst of the waters to give them life, and his life is in them still. Therefore, it was through the Spirit of the Great One who died in the days of old that the soil became fruitful. Beyond the reach of the living waters which rise and fall like the chest of a breathing man, the land is dead. It remains barren like a woman who has not known a man. It was known even to the men of old that if the land was not refreshed with the living waters but with other waters, then its increase would diminish from year to year until it became waste. The increase within the soil comes not from water alone but from the life within the water. Life comes forth from life, and that which has not life caimot beget life.

Therefore, the good land is that which is married to the threefold god, and land not so married remains barren.

The married land is covered with the rising waters, but the land not married is ignored by them.

These things were written concerning The Children of Panheta: Yosira spoke with Panheta as man speaks to man, therefore the laws of the Inta were not changed, remaining to bind alike those of them who dwelt on the soil or dwelt on the sand. If any man went among the Inta their laws became his laws and if any woman left the people to dwell among the Inta she became even as they and might not return.

Even as the Sunspirit journeys on a road set between the stars, so does the spirit of man journey with the movement of the waters. Therefore, when a man dies his body shall be buried lengthwise with the great river.

Even as the land upon which things grow belongs to the kindred whose blood is within it, so shall no man own to himself alone anything growing up from it, whether it be grass or herb or tree. But each man and woman may take of every herb and fruit as much as can be gathered in the hands and eaten before sunsetting.

Even as the Spirit of Life resides in the things which men eat, so does it reside in the living things from whence they came. Therefore, any tree or bush bearing the food of men shall not be cut or broken.

The blood of beasts cries from the soil even as does the blood of men; therefore, if shed it must be appeased.

Slay no beast unless it be needed for food, and bury the head and whatever comes out of its belly. Every other part which is taken shall be eaten or burned, except for the bones and the skin which are to be used.

Fire serves man, but it can also become his master. Consider its nature. Does it spring out of the wood unbidden or of its own volition, or does it require the agency of man? Does it reside in the wood or is there a firespirit?

Only the fools among men start something which they cannot control. Never let a fire grow into a thing of much smoke, keep it bright, using no more wood than is needful for the purpose. Let it not stray from its proper place, which is the place where it serves without menace.

When they become of an age to do so every man and woman should take themselves a mate. Those who fail to do so are not held in the highest esteem.

By the things whereby a man commits a wrong, so shall he be punished. Likewise, he shall be dealt with according to the nature of the wrong. The customs from times past are not unhelpful guides. When Yosira came to the place where the Inta dwelt they made him welcome in this manner, "When we saw you our hearts were gladdened. The life was renewed in us and though content as we were you brought refreshment and joy". Yosira called these people his unweaned children.
Posted by arclein at 12:00 AM