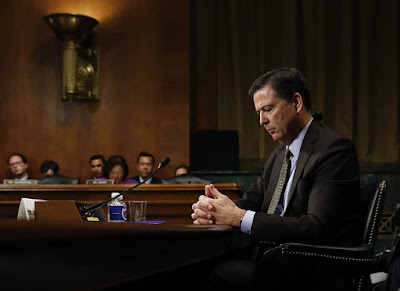 The world is full of many talented men who can step into every demanding job out there.  What i find often missing is that oddity called fine judgement.  That is surely Comey's flaw and as surely the flaw that made Hilary a marked woman however talented.  Yes his job was impossible and surely it was in the nature of the Obama White house to politically compromise all potential threats which he certainly represented.

In the end, his abandonment of the Email fiasco instead of kicking it upstairs where it belonged was bad.  Yet it may have been forced.  And then he should have resigned.

Then we have the untimely change of heart just before the election.  There was a way around a public airing in this case as well.

In the meantime he is riding herd on a host of serious investigations that beg visible activity as well.  So Why?

I also do think that Trump wants action and that Comey is a master stonewaller or likely appears to be.  That is not something that Trump could tolerate forever.

In the event, this parting was inevitable and necessary and still regrettable..

Trey Gowdy is famous for getting the truth. He knows exactly what to say in order to get people to give him what he wants. He fights for conservative values that others will not and was a staunch supporter of President Donald Trump during his run for office. This is no different now. He continues to do the things that Americans love.

Many people would even like to see him as the replacement of James Comey, the former FBI Director who was fired by President Trump.

Gowdy came out with a statement on the firing saying:

“Director James Comey had a very difficult job. I appreciate his service to our country as both a federal prosecutor and the head of the FBI. I had my differences with him on some matters but never lost sight of the fact that he had a very difficult job and undoubtedly had access to facts that perhaps the rest of us did not. I am thankful for his service to our country and am hopeful our President [Donald Trump] will select and independent minded person to serve as the head of our nations premier law enforcement agency. Our justice system is the foundation of our republic. It must be both respected and fully worthy of our respect.”

Gowdy is truly an American hero. He should be the replacement at the FBI as he knows how to get the truth. Comey was starting to fall apart at the end of his time at the FBI. He started to lose the path that he was on and what he needed to do as director. The Hillary debacle was the final straw.

James Comey should have been fired a long time ago, so this come as no surprise.

President Donald Trump has officially let FBI Director James Comey go from his post. We have been waiting for this news for a long time and it was only a matter of time before it happened. We are now going to get the full details of what really happened during Comey’s time at the FBI. People will soon realize what a fraud this man was and it could lead to more things.

In his statement to James Comey, President Donald Trump says:

“”While I greatly appreciate you informing me, on three separate occasions, that I am not under investigation, I nevertheless concur with the judgement of the Department of Justice that you are not able to effectively lead the bureau. It is essential that we find new leadership for the FBI that restores public trust and confidence in its vital law enforcement mission,”

As you can see, this is what Trump has wanted to do for a long time. He waited until he had the advice from the Department of Justice to carry it out, however. Finally Comey will be let go from this post that he does not deserve. He was a tired man with nothing to add the the FBI. He should have been let go a long time ago.

Comey has been the victim of many attacks as he was involved in some very shady things. This proves that he was a liar and a fraud if he got fired by President Trump. He did something that he was not supposed to do and that did not make the president happy.

Finally we do not have to deal with this man anymore.