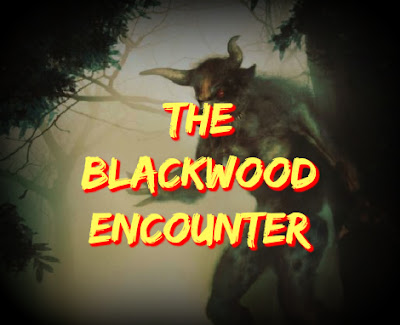 We have the Giant sloth again.  In this case the horns are seen although these seem to be quite rare generally and may well be a seasonal effect or associated with a sub species only.  They have been seen before.  Better yet seeing cloven hoofs actually means seeing the two toes with large claws as again conforming to the giant sloth.

The attack charge is important.  It is short range and used specifically to reach a target.  At that point those four sets of claws will do their work to tear into the target in this case the horse.

We are steadily building up a serrious inventory of excellent sightings and completing a pretty solid picture of our subject.

I recently received the following account from Mark Sceurman at Weird NJ:

We received a call at the office from a woman named Olivia who told us quite an incredible tale of what happened to her and her daughter while horseback riding in August 1976. Here is her story:

My daughter and I decided to take our horses out riding, like we occasionally did in the Lakeland area by Blackwood. It was August 9, 1976. I remember the date because we knew Hurricane Belle was soon to hit the New Jersey coast, so we wanted to get some riding in before that. It was a windy day, but we followed the usual trails, going along dirt paths that were close to a junkyard.

We approached one section of woods when suddenly there was dead silence. We usually heard all sorts of wildlife in the area, but heard nothing now.

Then a crow cawed loudly three times, and the horses started acting up—we couldn’t figure out what was going on.

And then up in front of us, about one hundred feet or so, we saw this “thing”! It was about six feet tall. Its back, which it was scratching against a tree, was facing us. At first to me it looked like a large dog on top of a horse.

I asked my daughter, “What is that?”

It started walking along the path we were riding on, and we slowly followed it up the hill, but the horses were reluctant to stay calm. They started to go wild.

The thing turned around, and I could better see what it looked like. It had whitish hair, with black spots on its hips. It had horns coming out of its head and red, slanted eyes. Its nose had a pig-like snout. It stood on two feet that ended in cloven hooves; its hands were tipped with large claws. And it looked like it was slobbering all over.

It jumped into the path with its arms opened wide, lowering its head like it was going to charge us. At the time I felt as though I was in some kind of trance, like I was in a movie or something. Only when my daughter yelled, “Let’s turn around and get out of here!” is when I realized we might be in danger. We were certainly afraid of whatever it was.

Then it did charge at us, tucking its arms in and running like the Bionic Man. It tried to grab one of the horse’s tails, but we took off. When I looked back I noticed it had stopped in the spot we had taken off from.

Like in the movies, after we got away from this thing, we saw a Washington Township police car by the junkyard and told the policeman driving it that there was a strange creature in the woods that came after us, and we described it to him.

The policeman said, “Well, I hope to hell we don’t catch it!” and started to fill out a report. But amazingly, this thing showed up in the junkyard and we all saw as it hopped over the eight-foot fence, galloped in front of the police car and then ran into the woods! After that, we took the horses right back to the stables.

The policeman wanted my address so he could speak with me later, but I didn’t make it home in time. He had already come and gone. I never found out if he filed the report. Maybe he didn’t want to report it.

Later on, the owner of a local ranch told me one time he found one of his horses dead in a field, with its stomach ripped open.

I am telling you: I believe there is something out there. There were three witnesses that day and my daughter and I can recall vividly every moment of our encounter with this thing even after 40 years. I’ll never forget it. I’ve never told this story to anyone outside of the family, but my daughter convinced me that we should tell it to Weird NJ.

On further investigation by Weird NJ, we tracked down some officers who worked at the Lakeland Police Department to see if anyone recalled the incident or if in fact it was ever was written up by the police officer at the scene. Our sources tell us there was a total confirmation on the strange sighting in 1976. The police have other stories about a large flying animal that police observed in the area. Unfortunately at press time we are still in pursuit of this story and what other weirdness is happening in the Blackwood area.

NJBigfoot.org reported a similar sighting to Olivia’s that happened six years later in Jackson along Bowman Road: “I was taking my daughters to their riding lesson early in the evening on Oct. 14 (about 5-6 PM). The ranch was along Bowman Road. This thing covered in reddish-brown hair ran across the road in front of my car (about 200 to 300 feet). It ran really fast. It stood upright on two legs. It had a collie-like face, long and hairy. It didn’t stop, and just kept on going into the woods.”

A park ranger, John Irwin, was traveling on a deserted road at night within the Wharton State Forest in December 1993 and had reached a spot where the Mullica River was next to the road. His vehicle’s headlights shone on a large, dark figure that was emerging from the woods and moving into the roadway. As he got closer the figure stood in front of the car, blocking the roadway. Irwin had to stop his car in order to avoid hitting the creature. He described it as being over six feet tall and covered with black fur that looked wet and matted. It appeared not to have any forelegs but had a pair of huge, powerful hind legs. The creature glanced through the windshield, revealing two piercing red eyes. It stood a few minutes and then turned and continued across the road, walking upright like a human, but in a peculiar robot-like fashion. - Fortean Times
Posted by arclein at 12:00 AM