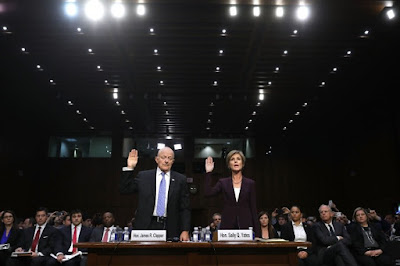 We are in severe need of the application of the proper federal laws established to take down politicians who believe they are somehow above the law.  This activity is beyond outrage and represents a directed war against political opposition with malice aforethought.

There is actually no other reason for this directed curiousity and the defense is clearly an exercise in legal parsing as if that could excuse the inexcusable.  Stop it already.  You could and you did and used every trick to deftly stp around safeguards.  The motive is obvious.  That it was futile is quite another matter and that is why we now know about it.

2016 must result in serious charges been laid and most certainly not against the winner who ran a novel but not a criminalized campaign.  Think about that.  We are talking about a political culture of treason that needs a true cleansing. I suspect that a lot of activity is brewing back stage now.   I know what i would be doing and it is not more of thesame...

Obama Officials Admit to Receiving ‘Unmasked’ Intelligence Reports During Election Campaign
Questions have been raised on whether spying was politically motivated, and who leaked classified information to The Washington Post

Two high-profile officials who served under the Obama administration told a Senate Judiciary subcommittee on May 8 that they had reviewed classified information in which Donald Trump, his associates, or members of Congress had been unmasked.

When an intelligence agency gives transcripts of intercepted communications, it often seals the names of U.S. citizens. When a recipient of an intelligence report requests to have the name revealed, it is referred to as “unmasking.”

The testimonies by Sally Yates, the former acting attorney general, and James Clapper, the former director of national intelligence (DNI), raised the question of whether communications of the Trump team were gathered for legitimate purposes or for political purposes.

At least some of the requests appear to have been related to an investigation ordered by Obama in July 2016 into potential Russian interference in the election and collusion between Russia and the Trump campaign.

During his testimony, Clapper reaffirmed that the investigation by the DNI as well as the CIA, FBI, and NSA did not find any evidence of collusion.

In her testimony, Yates said that she had warned the Trump administration that former national security adviser Michael Flynn had lied to Vice President Mike Pence about his communications with Russian ambassador Sergey Kislyak. The Trump team confirmed Flynn had lied and fired him on Feb. 13, after he’d spent just 24 days on the job.

During the hearing, Yates declined to answer most questions about unmasking, on the grounds that it’s classified.

However, both Yates and Clapper confirmed that they received classified information in which Trump, his associates, or members of Congress were unmasked.

When asked if they personally requested unmasking in these cases, Clapper said he did in one instance, and Yates said, “I can’t give you the details.”

During Trump’s transition into office, someone who received the reports with unmasked names of Trump team members then leaked the classified information to The Washington Post—violating U.S. law.

Mike Rogers, director of the National Security Agency, told the Senate Armed Services Committee on May 9 that in the case of Flynn, in which his unmasked communications were leaked to the media, “that is illegal.”

The statements from Yates raised additional questions on how she received the information on Flynn, and whether this fits into the broader investigation of whether the Obama administration violated the law with the surveillance and with the transmission of classified information.

The Senate subcommittee is now also investigating who was behind the leak and who, in turn, provided them with the information. Both Clapper and Yates said they were unsure who was behind it.
It was confirmed during the hearing that someone requested unmasking the surveillance reports, and then spread the documents with the names revealed. Yates confirmed she had received such reports.

Rogers said the intelligence community has a “very strict process” for handling the unmasking of names. He said if someone’s name is unmasked in a report, that report is given only to the individual who requested it and “they are specifically told and reminded” not to share it.

This brings further questions onto Susan Rice, who said she had requested unmasking, yet said in an interview with MSNBC in April that she did not do it for political reasons.

Rice was asked to testify before the Senate committee, but she declined to appear.

The findings may also expand the investigations into whether the Obama administration spied on members of Congress, and again whether it was done with a political motive.

Sen. Rand Paul (R-Ky.) wrote a letter to Trump on April 10, obtained by news and entertainment website Circa, in which he said an anonymous source alleged that “my name, as well as the names of other members of Congress, were unmasked, queried, or both, in intelligence reports of intercepts during the prior administration.”

On May 5, Paul wrote on Twitter, “I have formally requested from the WH and the Intel Committees info on whether I was surveilled by Obama admin and or the Intel community!”