Scientists Develop ‘Nanopores’ That Inexpensively Filter the Salt Out of Seawater 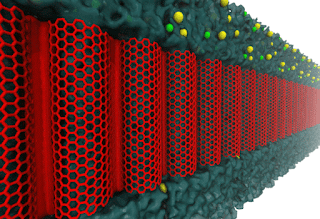 The idea is hardly new.  It just does not work that way in practice.  Now it appears that we are actually getting close to having a commercially viable product.

Without question the one important technology we truly need is a superb way to separate salts from sea water.  This could then support direct irrigation from the sea.  There have been multiple strategies including one i was involved with that fell apart before it could be commercialized.

I assure you that a solution is out there and it will happen.  Then all of Earth will be well watered.
.
Scientists Develop ‘Nanopores’ That Inexpensively Filter the Salt Out of Seawater

There’s filtration and then there’s filtration. Engineers in the US have been working on the latter, coming up with a new markedly more energy-efficient way of taking the salt out of seawater, which could deliver huge advantages in terms of providing people with access to drinking water and help combat problems like drought.

The researchers have developed a material that allows high volumes of water to pass through extremely tiny holes called ‘nanopores’ while blocking salt and other contaminants. The material they’re using – a nanometre-thick sheet of molybdenum disulphide (MoS2) riddled with these nanopore holes – is the most efficient of a number of thin-film membranes that the engineers modelled, filtering up to 70 percent more water than graphene.

“Even though we have a lot of water on this planet, there is very little that is drinkable,” said Narayana Aluru, a professor of mechanical science and engineering at the University of Illinois and leader of the study. “If we could find a low-cost, efficient way to purify sea water, we would be making good strides in solving the water crisis.”

Molybdenum disulphide coupled with nanopores could be that solution. While desalination isn’t a new concept, the efficiency gains with this kind of new material – both in terms of the energy required to make the filtration work, and also the cost of keeping a desalination system running – could make a world of difference when it comes to processing large amounts of seawater.

“Finding materials for efficient desalination has been a big issue, and I think this work lays the foundation for next-generation materials,” said Aluru. “These materials are efficient in terms of energy usage and fouling, which are issues that have plagued desalination technology for a long time.”

Conventional desalination relies on reverse osmosis to channel seawater through a thin plastic membrane, but the process suffers from a number of bottlenecks. While the membrane appears thin to the eye, from a microscopic perspective it’s more tube- or tunnel-like than a sheet that’s only a nanometre in thickness, which means it requires more pressure (and thus energy) to operate. They’re also susceptible to more clogging, which ramps up operational costs.

In comparison, the extreme thinness of the molybdenum disulphide membrane allows water to pass through with much less resistance, lessening or negating many of the above drawbacks. But the ingenuity behind the system isn’t just in its engineering.

“MoS2 has inherent advantages in that the molybdenum in the centre attracts water, then the sulphur on the other side pushes it away, so we have much higher rate of water going through the pore,” said Mohammad Heiranian, first author of the study. “It’s inherent in the chemistry of MoS2 and the geometry of the pore, so we don’t have to functionalise the pore, which is a very complex process with graphene.”

There you have it, folks – the world’s first thirsty water filter. We love it! The next steps for the researchers are partnering with manufacturers who can bring their modelled desalination technique to life. The first step will be testing, but they’re confident their findings – which are published in Nature Communications – could be applied on an industrial scale for everybody’s benefit.

“I’m in California now, and there’s a lot of talk about the drought and how to tackle it,“ said Amir Barati Farimani, a postdoctoral fellow at Stanford University who worked on the research at Illinois as a graduate student. ”I’m very hopeful that this work can help the designers of desalination plants.”

This article (Scientists Develop ‘Nanopores’ That Inexpensively Filter the Salt Out of Seawater) was originally created and published by Science Alert.
Posted by arclein at 12:00 AM