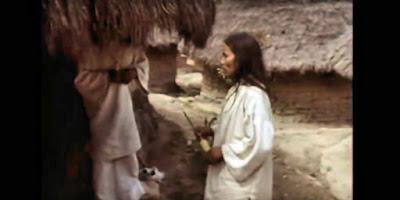 This is a fascinating report.  The society is pre literate and also pre currency as well.  They knowingly exclude both in their life way. way more important is governance which is surprising.

The population is all born as vassals for want of a better word. All grow up in this society participating in the community work load.  Task management is led by leaders much as we would appoint corporals.  They are chosen by their peers.  However they are also confirmed by direct communication with the spirits of the village.

There is also i think a third level of elders also confirmed as well.  However it is the forth tier that is so interesting.  These are children chosen to be mamas who start even at birth to be uniquely trained with sensory deprivation and meditation.  The Dalai Lama has nothing on this. These individuals learn to commune with the spirit world and what is referred to as the Great Mama or the spirit of surrounding biome.

Integrating this life way with modernity is a compelling challenge and naturally integrates with our elimination of global poverty.  It is also becoming timely and mere rejection is no longer an option for either party.

As you watch this recall that the cost of modernity is continuously dropping.  Free power means robot support for local sustainable agriculture.  That means persistent fruit harvesting in a timely manner.  We do not have it yet but it will.  A cell phone, literacy and power support as available would help this community.  At the same time integrating the rule of twelve with the parallel development of mamas is also strongly indicated for modern real agro communities.

Some scholars have theorized that these people are the descendants of Atlantis. They claim to be the keepers and “older brothers” of the Earth. This is an incredible program that everyone interested in indigenous American cultures, should watch. An explorer-journalist from the BBC became the first white person to visit a city in the mountains of Colombia. It is occupied by the descendants of the Tayrona Civilization, who call themselves the Kogi. The Tayrona were the ONLY indigenous civilization in the Americas, which withstood the onslaught of European colonizers. You will see a building very similar to a Creek chokufa (rotunda). The Spanish-speaking peoples of Colombia have no knowledge of the Kogi language.

What is also remarkable is that the Tayrona-Kogi look exactly like the mid-17th century drawings of the Apalache Elite in North Georgia – complete with long flowing hair on both genders. Both peoples lived in round stone houses among agricultural terraces on the sides and tops of mountains.