Did the mythical Saraswati Really exist? 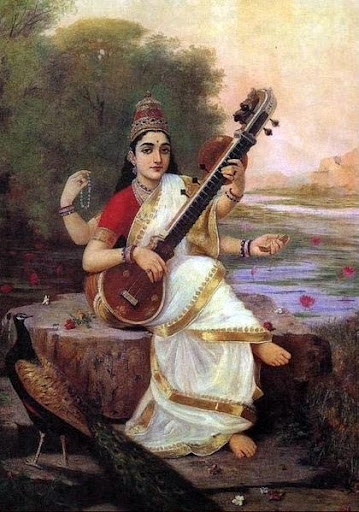 It appears to be a monsoon flood release river.  Add in that we do not know the actual extent of earl deserts and we may be underestimating the true fecund nature of the Indus valley.  Imagine a rain forest there.  Mankind has cleared lands often that should never have  been cleared.

The same would happen to the Amazon were we to clear all the forests.

Archaeology and geology is mapping this river and that is well.
.
Did the mythical Saraswati river of the ancient Vedas really exist?

Sarasvati RiverVedasSaraswatiRigveda(Read the article on one page)


This is the description of the Saraswati River as written in the Rig Veda, a sacred collection of Vedic Sanskrit hymns dating back at least as early as the 2nd millennium BC. The Saraswati is described as a river greater than the Indus and the Ganges, which flowed from the mountains to the oceans. Since none of the existing rivers in India fit this description, the Saraswati has often been dismissed as a mere legend, or simply a figment of poetic imagination. However, in recent years, attempts have been made by geologists, historians, and archaeologists, to determine whether the great Saraswati did indeed exist.


According to the sacred Vedic texts, the Saraswati River was so powerful and majestic that it inspired the Rig Veda to be composed on its banks. It was even elevated to the level of a goddess. Saraswati is the Hindu goddess of knowledge, music, arts, wisdom and nature. She is a part of the trinity of Saraswati, Lakshmi and Parvati. All the three forms help the trinity of Brahma, Vishnu and Shiva in the creation, maintenance and destruction of the Universe. In the Rig Veda, Saraswati, a name meaning “having many pools”, is also the goddess of the river Saraswati, and she is nearly always depicted sitting on the banks of a flowing river.

The Rig Veda offers up a few clues about the location of the Saraswati River. According to the ancient text, the majestic river was situated between the Yamuna and Sutlej rivers, and the Drishadvati and Apaya were its tributaries. In addition, the Rig Veda clearly mentions that the Saraswati flowed all the way from the mountains to the sea.

According to Dr Mayank Vahia, a scientist working at the Tata Institute of Fundamental Research, who has written a report in DNA India, there is only one river that lies between the Yamuna and Sutlej rivers; in India it is called the Ghaggar, and as it moves into Pakistan, it becomes the Hakra. Although its river bed stands dry today, the ground surveys and satellite clearly indicates that it was once a huge river.

The Rig Veda offers clues to the location of the Saraswati River. Image source.

Michael Danino's book ‘The Lost River: On the trail of the Saraswati’, presents numerous pieces of evidence from topographic exploration, geological and climatological studies, satellite imagery, and isotope analyses, to support the view that the dried up riverbed of the Ghaggar-Hakra was indeed the legendary Saraswati River, and that this river once sustained the great Indus Valley / Harappan civilization, which flourished between 3500 and 1900 BC.

“The Harappan or Indus Valley Civilisation - the world's largest civilisation of the time - covered vast areas of modern day Pakistan and Western India from Kashmir to Gujarat,” writes Dr Vahia. “Its cities were spread across what appears to be a waterless desert in the western part of the Indian subcontinent. A careful plot of these sites suggests they lie along the path of a dried riverbed, and the river, if filled up, would rival the Indus in size. It could have arisen in the upper reaches of the Shivalik Hills in the foothills of the Himalayas, and then flowed west.”

S.R.N. Murthy, a researcher who conducted a geological survey, published in the Indian Journal of History of Science, supports this view. “The Vedic river Saraswati is not a myth. It was a live river in the Vedic time, and irrigated large areas supporting the Vedic Culture to a considerable extent,” he writes. “Its extinction is due to geological changes in the subcontinent.” 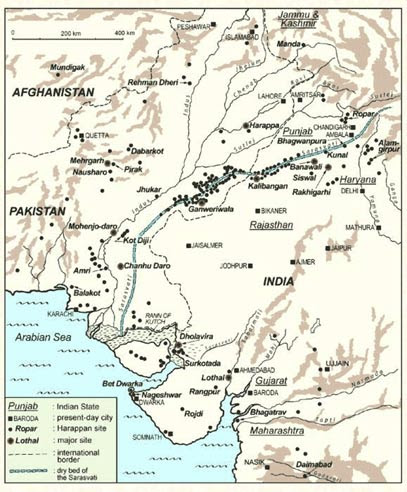 The proposed courses of the Sarawati River, and the location of ancient Harappan sites. Image source.

While numerous academics concur with Michael Danino and S.R.N. Murthy that the dried up riverbed of the Ghaggar-Hakra was the Saraswati River of the Vedas, Dr Vahia raises a few challenges to the theory. Firstly, he proposes that the Indus Valley civilization could have been sustained by existing rivers: “the Harappans were very efficient with water management and invented circular brick-lined wells. They could have lived quite comfortably with monsoon water channels,” writes Dr Vahia.

Secondly, he states that, although dating of the riverbed is broadly consistent with the demise of the Harappan culture, recent studies conducted by researches drilling into the riverbed suggests that the Gaggar-Hakra was probably never connected to the great glaciers of the Shivaliks, and that it was always a seasonal monsoon water channel.

“To make the matter even more intractable,” he writes, “the evidence of Harappan civilisation is entirely archaeological, while evidence of Vedic culture is entirely literary, and synthesising the two is not easy since there are some glaring differences in what is mentioned in Vedas and what it seen on the ground.”

For now, the question regarding the true identity of the Sarawati River remains unresolved, but with every new study, scientists are inching closer towards unravelling this millennia-old mystery.
Posted by arclein at 12:00 AM