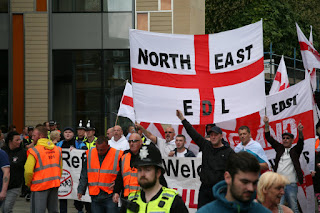 Bah!!   Europe must solve poverty.  It is easily done but the protocol happens to be subtle and nascent efforts have been naturally clumsy for the past century.

Otherwise Europe needs to establish a meaningful top tier of governance that allows leadership to be recruited and supported.

Do both and it will all fall into place seamlessly.  We will even see the Muslims absorbed.

Without reform, the EU risks falling prey to a populist uprising

Britain’s referendum laid bare the extent to which society—across Europe—is deeply divided between those who have prospered from globalisation and those who feel left behind.

The result was shaped by a series of cleavages: young versus old, graduates versus early school leavers and cities versus towns. But the loudest shout of anger among those voting “Leave” came from the left behind, exploited by the unscrupulous populism of those who led the “Leave” campaign and who knowingly told a pack of lies in order to win.

It may be too late to save Britain from the disaster it has brought on itself; I hope not. But the priority for European mainstream parties and politicians now is to come to terms with the wider reality: that the European Union’s survival depends on them correctly interpreting the anger and extremism growing in their electorates.

Their challenge is to do nothing less than ensure liberal democracy in Europe prevails over the populism driving the growth of authoritarian nationalism—and I don’t just mean in Hungary and Poland.

This is the threat posed to Europe’s political stability. Like the “Leave” voters in Britain, many of Europe’s citizens don’t see the benefits of economic integration and maybe that’s because in truth the benefits of the single market have not been fairly distributed.

This is a policy failure the EU now has to address.

Jacques Delors, the eighth President of the European Commission, grasped this in the 1980s when he argued the single market had to be accompanied by “Social Europe.” He doubled the size of the structural funds, which are used to raise up living standards where necessary. But that dimension of the EU’s personality has slipped as its image as a neo-liberal project whose purpose is to amplify and accelerate globalisation grows.

As a member of the European Commission I believed it was right for us to make trade and markets more free. But I also argued that this should be accompanied by policies to support individuals and communities exposed to the consequences—that while we could not protect jobs we should do more to help workers. I also maintained that liberal economics is correct, but that it must operate within a framework of social democratic values and interventions.

In other words, the free trade dividend needs to be much more explicit and much more fairly shared. Of course, income distribution and measures to promote social mobility lie in the domain of nations rather than at EU level. The member states, therefore, have to act through their own policies to complement the instruments used by the EU.

There is another important subject linked to this which the EU must also act on—migration.

The spectre of uncontrolled migration is a big fear factor for those left behind, even if their own personal experience of it is limited.

The EU needs to take a hard look at all forms of migration, as well as the potential migratory impact of further enlargement.

It is no longer possible just to keep reiterating the mantra of free movement without addressing its impact. We need policies in Europe that offer strong support for migrant rights to equal treatment and strong integration policies. There should be stronger enforcement of the external EU border (in which Brexit Britainhas an interest and should still contribute). We need to do more to stabilise our Mediterranean neighbours, again with continued British participation.

However, these steps need to be matched by a recognition that there are limits to any city or region’s absorption capacity: so maybe there should be an emergency brake or mechanism for temporary quotas as well as more financial help to relieve stresses through migration impact funding.

Without such policy innovation across Europe I do not think it will be possible to puncture the rise of populism. The biggest threat to the euro and Europe is political, including in Italy with the threat to the Prime Minister Matteo Renzi and in France with the rise of Marine Le Pen.

Above all we need economic growth and we should take some risks to get it. Without growth, all of the issues of opportunity, cohesion and fairness will get worse not better.

That means reform, to get labour markets to work better for young and old alike and to remove barriers to competition in product markets. It also means increasing private and public investment including in southern Europe. Of course we need fiscal responsibility but this should not be confused with budgetary fetishism.
\
The lead must come from the northern member states. Germany has the nicest house in Europe but even it will lose value if its neighbourhood deteriorates further.

In Britain, we may yet come to recognise that the UK cannot afford to leave the single market and that we will have to continue to accept the reality of EU budget contributions and (re-thought) free movement rules. It is parliament’s role to settle these issues, with or without a further referendum.

For Europe as a whole, there is an urgent need for clear thinking and strong leadership. The question is, who will provide it?

“Of course, income distribution and measures to promote social mobility lie in the domain of nations rather than at EU level.” Not too clear. This would follow from orthodox thinking in what areas? What is indeed clear is that the EU and the UK are parallel in one crucial respect: each endorses regressive taxation, in particular VAT. In so doing each expresses a reluctance to promote the upward mobility of the less fortunate, or, more generally, a reasonable level of egalitarianism.

The Neo-Liberal model worked fine up until 2008 but the problem now is debt, both private and national, and this is what threatens to undermine the EU as wages are driven down, investment dries up, jobs are outsourced and housing costs are driven up. The gap between rich and poor is greater than it has ever been. The left behind are looking for a leader to speak for them, to address these issues as they impact on communities. Immigration is a factor where people see the places they grew up in become unrecognisable and their history is lost along with their identity and pride in their former achievements. If we were all in this together it would be acceptable but years of social division promoted by biased media promotion of anti-state-funded social infrastructure rhetoric have left people wondering who to blame for their losses. We depend on immigration for our doctors and nurses, carers and shop workers. Investment in education and social housing will be needed if Britain is to become more self-sufficient. Representative democracy needs to be more representative of those it is supposed to represent whereas it looks more as if politicians are being bought by lobbyists for big corporations and privatisation of national assets instead. The referendum has raised people's interest in politics generally and participation in democracy is now more popular than it was.

"and who knowingly told a pack of lies in order to win." And that won't do, will it Peter?