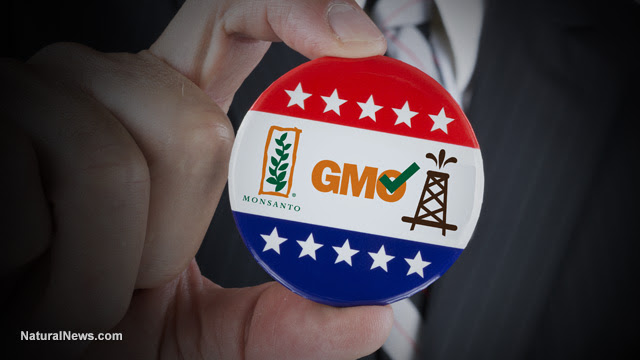 All the gnashing of teeth out there is driven by the fact that the only candidate in this race able to stand up to  global corporate interests is one Donald Trump.  Even he cannot win every battle either.  Yet the other side is likely to know that they are in a battle and will give much more to get.  That is good and terribly welcome.

Progressive interests are been dumped unceremoniously as quickly as possible by the Democrats, now that Bernie has been black mailed and humiliated into submission.  Think about that.  A whole sector of the electorate that he mobilized are going to be simply forgotten.  It is thought that they have zero choice except to support the Dems..

It they actually shifted their allegiance to Trump as unthinkable as that is it would be historic.

(NaturalNews) Because of the diverse audience we attract, there are a lot of Natural News readers who are still supporting the Democrats. If you're one of those people, it's time for you to question what you're really supporting because you may not be aware that the democratic party openly supports fracking, Monsanto, vaccine mandates, chemical agriculture and the TPP. On top of that, they're mostly opposed to GMO labeling, too. Only Sen. Sanders really stood up to the biotech industry on that point, and now after the DNC email leaks, you know how the democrat establishment hosed Sanders with a vindictive smear campaign to destroy his chances of winning the nomination.

The truth is, the Democrat party is not a party of progressive ideas. Even the progressive news website Common Dreams has authored this piece blasting the DNC for its betrayals.

Wake up, America! Today's Democrat party is a party that is beholden to corporate interests and government totalitarianism. On top of that, Hillary Clinton is not just a war criminal but an environmental criminal, collecting over a hundred million dollars in "donations" so that international billionaires could rape and pillage the land by clear cutting rainforests or mining for uranium to produce nuclear weapons.

If this is the first time you've ever heard this, you don't know the truth about the Democrats. You MUST watch the "Clinton Cash" documentary, shown below, to learn the real story which includes these astonishing revelations about Clinton: (h/t to Zero Hedge:

• Russian Purchase of US Uranium Assets in Return for $145mm in Contributions to the Clinton Foundation - Bill and Hillary Clinton assisted a Canadian financier, Frank Giustra, and his company, Uranium One, in the acquisition of uranium mining concessions in Kazakhstan and the United States. Subsequently, the Russian government sought to purchase Uranium One but required approval from the Obama administration given the strategic importance of the uranium assets. In the run-up to the approval of the deal by the State Department, nine shareholders of Uranium One just happened to make $145mm in donations to the Clinton Foundation. Moreover, the New Yorker confirmed that Bill Clinton received $500,000 in speaking fees from a Russian investment bank, with ties to the Kremlin, around the same time. Needless to say, the State Department approved the deal giving Russia ownership of 20% of U.S. uranium assets

• Lucrative Haiti Gold Mining Permit Awarded to Hillary's Brother - The Washington Post confirmed claims that Hillary's brother, Tony Rodham, sat on the board of a mining company that just happened to score a lucrative gold mining permit in Haiti, one of only two permits to be awarded in 50 years, while then Secretary of State Hillary Clinton funneled billions of taxpayer dollars to the island in the wake of the devastating earthquake of 2010

• Keystone Pipeline Support in Return for $2mm in Speaking Fees - After not being engaged to speak by TD Bank during his first 8 years out of the White House, Bill Clinton began a string of speeches for the bank starting just 4 days after Hillary was nominated as secretary of state resulting in over $2mm in speaking fees. As it turns out, TD Bank happened to be the single largest shareholder in the Keystone XL pipeline which needed State Department approval. Wouldn't you know it, Hillary Clinton decided to support the pipeline -- a heresy to environmentalists -- and delayed the Obama administration's rejection of it

Meanwhile, Donald Trump is actually more welcoming of popular ideas that support the people rather than the wealthy corporations

Did you know that Donald Trump opposes vaccine mandates and rapid-fire vaccine assaults against children?

Did you know that Trump serves organic food at many of his resort properties?

Did you know that Trump openly opposes the TPP and believes in protecting America's jobs against the globalist corporations?

We don't yet know where Trump stands on fracking and GMO labeling -- and we're not going to get any candidate who supports 100% of what Natural News readers believe -- but it's a fair bet that he'll be far more rational and supportive of the people than Hillary Rotten Clinton, the treasonous sellout who has already been bought by foreign interests.

If you were a Bernie Sanders supporter, the best way to give the finger to the DNC is to vote for Donald Trump

I'm also fully aware that many Natural News readers are hard core Bernie Sanders supporters. And I totally get that. Sanders holds a lot of great ideas on some very important issues such as breaking up the investment banking cartels. He also supports GMO labeling for food transparency.

Sadly, the DNC criminals conspired to destroy Sanders and make sure he would not win the nomination. And now, Sanders himself has surrendered to the Clinton machine, endorsing her and even refusing to reverse his endorsement after the DNC email leaks were exposed. (He's got no spine, in other words. He's just an obedient puppet of the Clintons.)

Because the DNC conspired to destroy your candidate, you need to give the finger to the DNC. And the best way to do that is to vote for Trump. Send a message to the DNC that if they disregard their support base and try to shove some criminal globalist into the nomination slot, you're going to vote AGAINST them!

At this point, Bernie Sanders supporters MUST vote for Trump (or not vote at all). You can't support Hillary and the DNC, because those people are the same criminals who conspired to destroy your candidate. You also know that not voting at all means Hillary could still win, and if that happens, America gets FRACKED big time, thanks to Hillary's pro-fracking, pro-GMO, pro-TPP, pro-vaccine, pro-pharma platform that sells out everything in America to the highest corporate bidder.

We can't let that happen, folks! We have to stop Hillary and the DNC. On all these issues we care about -- vaccines, GMOs, fracking, pesticides, etc. -- Trump can at least be reasoned with. Clinton, on the other hand, has already sold out to the globalists at every level. (It's truly criminal.)

Watch this Clinton Cash documentary to learn more. You MUST get informed!