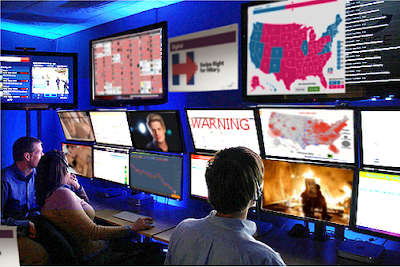 I have been silent on the campaign in the USA during the past three weeks, except for previously written items.  That was mostly to stand back from the hurricane of vitriol dumped on 'Trump immediately after the Democratic convention.  It is obvious that polls were falsified and just about every hang dog was trotted out to spout lies about trump.


Trump did the only thing one can do and that is to allow the storm to blow over as it all will be old news quick enough.  Of course any straw of comment by him is immediately twisted and bent including this last idiocy about the 2nd amendment.  What he said is quite reasonable in contxt and in reasonable times could never be construed as incitement.  Yet that is how the media is playing everything.


We are now starting to get clear evidence that the real polls are a catastrophe for Hillery.  Worse than all that, it is clear that a massive number of traditional Democratic voters are prepared to trust Trump as the best way kick real ass in Washington.  In fact that is the current American consensus.  This is a voter's revolution and Trump is riding it.

The elite and the money interests are pouring money into the black hole that this represents in an attempt to stop Trump and totally missing their real enemy which is the American People who are now coming for them and will not be satisfied until real blood is spilled.  I posted in 2008 that what happened was Treason. It has merely gotten worse since then.  We are now tasting the real back lash.


Trump is their rallying flag.


At the same time do read this item.  Hillary is a seriously sick lady and cannot have much longer with us.  Worse, the negative effects include a diminishment of her intelligence.  Add in her uncontrolled temper tantrums and controlling behavior and it becomes scary.

I know that the Donald uses what i will politely call performance art to get his way but it is a very calculated and deliberate ploy. He is good at it and having done as much myself. i know better than to take it seriously.  Hillary has never learned to channel her rage button and this can lead to real mistakes to say nothing of performance issues with her staff.  She needs to be retired if even that is possible.


We discover here just how completely Trump has upended the social media game in his favor.  That means that technically he is unstoppable and this last blast may finally exhaust the media and even the elites as we now get down to the actual grind of the campaign..
.

Insiders say the Hillary camp is panicked--possibly on the verge of collapse. Not only is Trump's polling far better than the media narrative shows but the even more predictive Social Media scene has collapsed to "landslide" proportions in favor of Donald Trump. While Brietbart and The Gateway Pundit had covered the publicly available data, we used some of our benefactors extensive resources to try to get a look inside the Social Media response center of the Clinton Campaign.

We'll tell you: the shop they run is tight. Fear--terror, really--of Mrs. Clinton goes a long way to keeping people in line--but now that the cracks have started we were able to compromise a key person inside the sequestered Media Room run by David Brock's "Internet Warrior Virgins" (his term, not ours).

This is what we learned.

RealTrueNews: "We understand that a lot of attention has been paid to the 'social media' campaign by the Clinton campaign--and it's not working out?"

DNC Source: "An understatement. Hillary inherited Obama's 'Victory Lab' and analytics--but that was all geared to 2012 which was still pretty primitive by today's standards--and to Mitt Romney who might as well have been a caveman by today's standards. Things . . .  changed. [quietly] Hillary didn't."

RTN: "What do you mean? What things changed?"

DNC: "I could give you all the stats about social media penetration and stuff--but what really changed? Trump. Trump is what changed. None of the old strategies work on him."

DNC: "It's pretty obvious--ask any veteran of the Hillary-Clinton battle of '08. Or Obama vs. McCain--or Romney even. What'd we call our opponents?"

DNC: "Racists. We called our opponents racist. It worked--like, 93-98 times out of a hundred--people would back down. Run. Back then there was zero counter-narrative. McCain played it soft-ball. Romney was pretty clean but he wasn't ready to get nasty and take the heat. All their surrogates? Allies? Only Sarah Palin had the woman-card. That was it. We crushed them. Their online-portion of the vote? It was smaller than today--but they were demoralized. Shut down."

RTN: "So that was intentional."

DNC: "Totally. It tested through the roof. It did this time too--the focus groups? Say Donald Trump is racist? It'd work on them about 83 points--it came down due to saturation--but that'd be more than enough."

RTN: "What do you mean reverse?"

DNC: "It made them stronger--more committed. I've never seen anything like it. It's like Trump didn't collapse when we tryed it on him and suddenly it didn't work any more."

DNC: "The social media front might be the biggest deal going. Right now tests have shown that attack-ads almost never have any lasting impact. Events like conventions? Like debates? They determine who answers the phone--not who changed their vote. But social media? That's your kids being on your back--or your buddies. That has a real, lasting impact. That actually moves votes in a way we can track. Around May our High Command said we had this in the bag.

RTN: "Can you be a little more explicit?"

DNC: "I can't get caught saying this. None of us are gonna have careers when this is over but there are . . . other concerns."

DNC: "We bought fake followers. That used to be what everyone did. Trump? His guys are all real. We've got media-established narratives. Our coms-team works with the major outlets to shape the stories. That's traditional. He doesn't even have a Coms Team--he just fires off tweets and they all go viral. Every last damn one. "

"We have our response team go hard--racist. Sexist. Social Justice up the ass. It just pisses everyone off. It changes nobody's mind. We've got Black Lives Matter. He's got Milo [ Yiannopoulos ]. We've paid like--like 300k for Politico. They paid nothing and they've got Brietbart. You know who Trump voters trust? Brietbart. Look at the numbers."

"Hillary's in a panic. She's always been on some kind of medication--but they've been upping the hell out of it. She's freezing. She's having panic attacks. The Secret Service is trained to get her out of these  . . . fugue states--but one's going to happen in public and it'll all be over. Why do you think she doesn't talk to the press? No one knows what to do about the debates. It's going to be a disaster."

RTN: "Wasn't there an issue with the scheduling or something?"

DNC: "We want to minimize exposure everywhere we can. With press questions. With Sanders. And so on. So we work with the NFL on scheduling. Sure--Trump complains--but he's not going to bail. That's a problem. We don't think she can last 30 minutes with him under optimal conditions."

DNC: "Nobody knows right now. I'm hearing drop out and give it to Tim Kaine. I'm hearing have some kind of big Black Lives Matter 'event' around the debates to get them canceled. I saw--"

DNC: "You know the FBI's counter-terrorism playbook involves encouraging radicals to take extra steps to see if they will and then busting them?"

DNC: "There's a plan to use assets inside the FBI--compromised agents--to have one of these go-too-far schemes actually not get stopped. Have something go wrong. Deliver guns--explosives--whatever to these radicalized groups and then instead of busing them . . . the event happens. That way it could be timed and targeted since it's actually agents doing the planning. I've seen a plan tor an event near the first debate--State of Emergency. Local Martial Law. It'd soft-kill the whole thing."

Director Comey needs to be in a TV Ad saying he didn’t charge Hillary because his Opinion was that she was Unsophisticated to Know what she was doing wrong , so why would the American People want Hillary running the USA ?

Why this will work better in debating the Liberals is because the debate now is saying she is corrupt but they keep referring back to Comey not charging her , so if you state what Comey says in his own words this will make the Liberals go crazy trying to change the Image of Hillary being Unsophisticated !!!!!


Clinton Deemed too "Unsophisticated" to Pursue Charges Against so why would you want Hillary as POTUS ?
http://sputniknews.com/analysis/20160709/1042711310/hillary-unsophisticated-fbi-primary-comey.html

Rubio is wrong about this ....... Obama and the DOD wanted ISIS to emerge so says this LEAKED DOD memo by Judicial Watch , don’t let the Liberal Press and Pundits tell you any different !!!!!!!!!!!!

Yet again, double standards since the FBI has no problem charging the retarded, or helping other mental defectives falsely enlist in ISIS, so why is she so special? Because there isn't any rule of law other than money, and when you reach that point you better realize the reason they are trying to get the people disarmed is because they infact nothing more than the criminals that they appear to actually be.