Guess Where the French Originally Planned to Build Capital of New France? 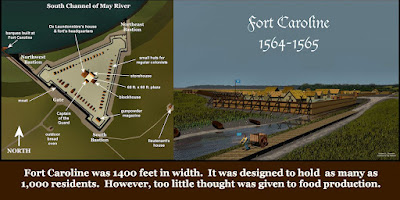 What ever the reason, the result was the collapse of the French colony in Georgia. One can see the correct course of action but actual actions may well have been in response to royal orders.  This led to complete failure.

In terms of what ifs, it is certain that  a success then would have allowed French to secure the entire Eastern Sea board with sustainable colonies,  much as the English did a century later.

The climate was potentially suitable for serious colonization although we do not know how disease issues would have hampered French efforts during the early going.

GUESS WHERE THE FRENCH ORIGINALLY PLANNED TO BUILD THE CAPITAL OF NEW FRANCE?

. . . to be precise, the natural terrace, which was selected in 1785 to be the location of the University of Georgia.

Now that does not make a whole lot of sense, does it, if Fort Caroline was in Florida.

This location was where the Great White Path (of Creek Migration Legend fame) intersected with the most northerly point of canoe navigability on the Oconee River. About 20 miles to the west was a huge population of Apalache and their capital. The Oconee River is a major tributary of the Altamaha River . . . the real location of Fort Caroline. The Great White Path interconnected a chain of Itza Maya towns in the high mountains with the dense cluster of Apalache towns, which are now in the Atlanta Metro Area. It originally passed through Track Rock Gap. It was two days march between the planned capital of New France and the massive gold deposits around present day Dahlonega and the Nacoochee Valley. The Great White Path is now known as the US 129 highway.

As soon as the additional 6-900 colonists arrived in a massive fleet from France, René de Laudonnière planned to lead most of them up the Altamaha River to the Oconee River, where they would begin building Paris Nouveau (New Paris). He had already struck a deal with Apalache High King to go into business together. Both the Apalache and the French Huguenots would have grown exceedingly rich from their monopoly on trade with Europe. The Apalache were also promised French firearms and cannons, which would have quickly enabled them to conquer most of North America, since they already had a standing army of 10,000 soldiers. However, six months passed and the French fleet had not shown up. Because the colonists were now starving, De Laudonnière decided that they should return to France and get re-provisioned.

How Jean Ribault royally screwed up

When Jean Ribault’s large fleet, containing almost 1,000 sailors, soldiers and colonists arrived at Fort Caroline, the colonists were already in the process of embarking for France, due to the lack of food. They had dismantled the western wall of the fort so the Spanish couldn’t reoccupy the fort in their absence.

Ribault immediately relieved René de Laudonnière of his command. He then ordered the soldiers at Fort Caroline to move almost all of the fort’s cannons, munitions and food provisions into his ships, leaving the remaining men and women helpless against a Spanish attack. Brilliant Ribault then charged off into the mouth of a hurricane in search of a glorious fight with the hated Spanish. However, the Spanish ducked into the next sound south of present day Brunswick, GA and began building St. Augustine. Meanwhile most of the French colonists for New Paris were drowned when their ships sank in the hurricane or were blown against the shallow waters of the Georgia coastal islands.

The Spanish attacked Fort Caroline at night just as the hurricane rains were arriving. Almost all the adult males were killed – either in combat or by being hung from nearby trees. A small party of French colonists were able to escape under the leadership of De Laudonnière. Almost all of the people on board Ribault’s ships were killed by drowning or by Spanish daggers.

Had all the French colonists stayed at Fort Caroline, they would have greatly outnumbered the Spaniards, who had no cannons and little gunpowder. The Spaniards would have undoubtedly been decimated. Instead, the dreams of a France Nouveau for French Protestants were drowned by a hurricane.

The French Protestants were on excellent terms with newly crowned Queen Elizabeth I of England, the Scots, the Dutch, the Swedish Empire and most importantly, the thousands of Sephardic Jews, who had been evicted from Spain. An alliance of Protestants and Sephardic Jews would have quickly populated the Atlantic Coast of North America, with a majority of colonists probably being Jewish. The dream of New Jerusalem would have become a reality. Most likely, its capital would have been where Macon, GA is today, since Macon and Jerusalem are at about the same latitude.

Frenchmen thought Muskogean women were hot. French women thought Creek men were hunks because they were super tall and bathed every day. The French were very inclined to produce Métis babies. France Nouveau would eventually become a Métis nation in the Southern Piedmont and Appalachians. French Huguenot and Sephardic Jewish corsairs, based on the Florida Peninsula would have quickly strangled the Spanish Empire, since few treasure fleets could have survived the hatred of the Sephardim toward the Spanish. Even as it was, we now know that most of the pirates of the Caribbean were Sephardic Jews or French Huguenots. Within a few generations, the indigenous and mestizo peoples of the Americas would have thrown out the Spaniards. The Americas would indeed have been a different world today.

On the local home front, the Mayas in France Nouveau Thang would have transpired very differently. Instead of the public hearing “This Maya thing is a bunch of crap” from some fossilized Georgia archaeologist, the Director of the Anthropology Department at the École Polytechnique Fédérale de Paris Nouveau would have announced . . .

MAIS OUI! MON ARRIÈRE-ARRIÈRE-GRAND-MÈRE WAS A MAYA PRINCESS!
Posted by arclein at 12:00 AM