This is very interesting and makes complete sense to myself.  We have discovered or understood the two critical aspects of the problem itself.  The first is that all atomic matter is assembled axially from neutron proton pairings.  That means that component decay can be triggered with a specific photon including neutron decay.

At the same time we have understood that all cells are managed by their own super computer through the mechanism of using a coded photon to change the coding of a key electron.

All that means is that cellular life has the means to modify elements when it is necessary.  Curiously it also explains the presence of atomic gold in biological environments.  This has been one of those unanswered questions.

This work shows us that nature actually does exactly this.

A press conference was held at the Swiss Press Club in Geneva on June 21, 2016 by a Russian Corporate Partnership called Actinedes consisting of inventors Viktor Kurashov and Tamara Sakhno, and the administrator Vladislav Karabanov. Here is a transcription from the conference:

Vladislav Karabanov: Ladies and Gentlemen, Today, in Geneva we are making public a discovery and technology which, without any exaggeration, could be described as having historic significance. Now the essence of this discovery and technology boils down to the development of an industrial method for the transformation of chemical elements into other elements and their isotopes.

What we have to show you today is a transmutation without any nuclear reactors, without heavy water or anything of the kind, to obtain a transmutation of elements. Our approach to the chemical transmutation of elements is biochemical in nature. It is still too early to grasp the economic and civilizational significance of this development and technology. It would not be an exaggeration to say that this discovery is a veritable revolution which is going to open a new chapter in the technological progress.

“Unlikely as it may sound, this is a fact. The architects of this discovery and technology are leading Russian Chemists, Mrs Tamara Sahno and Mr. Victor Kurashov. These are theoretical and experimental scientists who stand on the shoulders of a dynasty of researchers who have been instrumental in discovering these methods for the transformation of chemical methods. Mankind, represented by the authors, has discovered this method for the transmutation of matter which is likely to change the face of today’s world, perhaps as deeply as it was changed by the use of electricity, perhaps even deeper. The repercussions of this revolution will be felt in the energy sector, medicine, industry and perhaps would also open up new industries, brand new industries that will have enormous humanitarian implications.

“What is most important to bear in mind is that what we are talking about here is a ready-made industrial approach that will be capable of producing target products in industrial quantities in a matter of months. With respect to the economic aspects of this discovery I am going to brief you about that later . . .

Victor Kurashov: “Ladies and gentlemen, our work to develop the technology for the transmutation of chemical elements goes back to the early 90s. The very first results were obtained back in 1998, but the bulk of this effort and research, as well as hundreds of successful experiments fall on the Summer and Autumn of 2013. Our further efforts involved patenting this work, and so for all these reasons we haven’t rushed to publish our findings until the patent was issued. We received the patent priority on the 15th of May 2014, whereas the patent itself was issued on the 25th of August 2015.

“Let’s move onto the process itself very briefly. The first component used in the process is ore, or nuclear waste. The second component of the process are valuable valency metals such as vanadium, chromium, manganese, iron, cobalt, nickel, copper, zinc, and others. Either of these will do, but we tend to use iron as the least costly element. The third component and a factor in this process, these are bacteria. Usually we use iron and sulphur-reducing bacterial species which we select along a certain list of criteria, such as that the bacteria are active, that they are resistant to radiation, that they are adapted to a heavily salted solution — ore, suspended in water.

“Now about the technology itself: ore, or nuclear waste (there’s no difference) is processed by bacteria in the presence of valuable valency elements in any closed vessel. The transmutation process kicks off immediately, and proceed stage by stage for two or three weeks until target elements are obtained. But if it is not stopped on time, this process would carry on until stable isotopes are obtained as the end product.”

I find this interesting. I have not yet found the patents referred to (harder to do in Russian), but the process here does not sound too complicated, and I imagine as word gets out there could interest among researchers to try and replicate the results.

Below is the text of a press release published on June 13: http://www.prnewswire.com/news-releases/presentation-of-biochemical-method-of-elements-transmutation-300283573.html

GENEVA, June 13, 2016 /PRNewswire/ — Gathered in a corporate partnership called “Actinides”, Vladislav Karabanov – administrator of the group and inventors Tamara Sakhno and Viktor Kurashov, claim to have created a revolutionary new method of transmutation of chemical elements through biochemistry. This approach would artificially produce many valuable and most valuable chemical elements and their isotopes from other chemical elements biochemically without the use of atomic reactors, cyclotrons, highly enriched uranium or heavy water. The method does not represent any threat to the environment or personnel. Its effectiveness in comparison to traditional methods is enormous.

The method leads to obtaining various valuable and most valuable elements and isotopes, demanded in energy, medicine, and industry. Among them Francium, Radium, Actinium, Protactinium, Americium, Berkelium, Californium, and various other isotopes. All of them in convenient form, favorable for separation and purification. It would also be applicable for the 100% deactivation of nuclear waste.

This method and its results are confirmed by the Russian Patent of the Patent Office. The inventors claim to have performed over 2000 experiments and obtained substantial and consistent results. The research work was conducted with private money and the technology is 100% owned by the group. The inventors claim, that this method is immediately ready for commercial scale production of many valuable elements and their isotopes, needed for medicine and industry.

The presented invention provides access to new sources of energy and medicines. Due to methods cost effectiveness, it will make most advanced nuclear medicine technologies available for a wide range of people. It will give impulse to the development in spheres such as energy, industry, medicine, space exploration and inaccessible areas of the earth and the oceans.

Authors of the invention will hold a press conference, its goal is to present this revolutionary method in Europe and the United States and find partners. 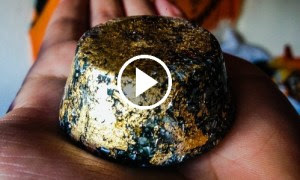