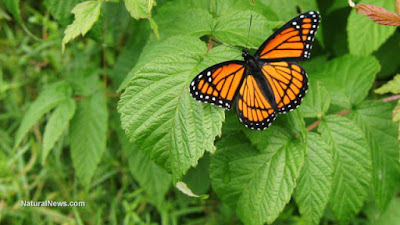 The damage plausibly linked to Round Up is staggering.  The massive reduction of insects has likely led to a sharp collapse in our song bird populations as well.

The bees and the monarchs were most vulnerable and they are paying.

It has to end and as soon as possible.  This will also accelerate the agricultural transformation into organics and real sustainable agriculture.

(NaturalNews) Recent research has pinpointed Monsanto's glyphosate-based herbicide, Roundup, as one of the main contributing factors to the drastic population declines experienced by monarch butterflies in the past 20 years.

Since 1997, monarch butterfly populations have decreased by a staggering 74 percent in California, home to one of the butterfly's most highly populated migrating grounds. A crucial natural pollinator of North American crops, the world cannot afford to lose these marvelous orange and black six-legged creatures.

Aside from excessive commercial development of forested lands, the use of glyphosate-based herbicides has been a large reason for monarch butterfly population declines.

The use of glyphosate in North American agriculture has increased 15 times since genetically modified Roundup Ready crops were first introduced in the 1990s. Consequently, a study conducted by Isabel Ramirez at the Universidad Nacional Autonoma in Mexico, revealed "significant decreases" in monarch butterfly populations in hibernation areas across North America between the late 90s and today.

Ramirez's study found that in 1997, monarch butterflies "occupied 20.97 ha (hectares)" of designated hibernation lands, while in 2014, they occupied "just 0.67 ha," revealing a direct correlation between monarch die-offs and the introduction of glyphosate herbicides in the 1990s.

Many believe that the reason for this correlation is that glyphosate herbicides are killing mass amounts of milkweed, an essential food source for monarch caterpillars.

Viktoria Wagner, lead-author and plant ecologist at Masaryk University in the Czech Republic, conducted a study aimed at observing the decline in milkweed populations on 1.2 million acres of North American wildlands being treated with glyphosate herbicides in attempts to restore native plant species. [ Say What?  arclein ]

In her research she found an enormous lack of record keeping detailing the effects of glyphosate on both milkweed and the native species the project was attempting to restore.

More shockingly though, Wagner discovered that the "intensive use of glyphosate on farms has, for instance, incidentally destroyed tens of millions of acres of native milkweed." Because of milkweed's crucial importance to monarch caterpillars, Wagner's study found the drastic losses of milkweed to be a "major factor in the dramatic decline of the butterfly species."

What makes matters even worse, is that milkweed is widely considered a low-impact weed, meaning it contributes very little to crop loss, making its destruction and consequential impact on the monarch butterfly unnecessary.

While measures are being taken to help restore milkweed populations, the extent of glyphosate's damage to monarchs is being completely downplayed by the pesticide industry.

For instance, the Mexican government has prohibited illegal logging of forests where monarchs spend their winters, and the U.S. government has developed new programs to increase milkweed abundance, but neither addresses the problem that glyphosate poses.

Independent scientists have vocally condemned these corporately funded measures for ignoring "the most evident cause of their [monarchs'] decline – the destruction of their breeding grounds by widespread glyphosate-use in America's GM crop farms."

Aside from contributing to declines in monarch butterfly populations, glyphosate has also been linked to a myriad of adverse human health conditions and alarming declines in honeybee populations. As the facts continue to pile up, the case for banning glyphosate is becoming increasingly overwhelming. Perhaps federal governments will wake up one day and realize that the protection of the world's habitats and its people is far more important than maintaining the interests of corrupt corporate lobbyists.
Posted by arclein at 12:00 AM

Our 6 South Central PA (USA)acres are bordered on all sides by a local dairy and poultry farmer's Round-up ready crops of corn, soybeans, winter wheat. The fall off of monarchs here has also been noticed. We maintain a wild (and growing) "patch" of milkweed in the hope that it will help. Only 2 monarchs spotted this year although many pollinators of of all types (native bees, etc.) and other butterflies (lots of Yellow Swallowtails) visiting our perennial garden as well as the bloomed red clover which I leave for them in different spots of the yard after mowing. The local farmers think I'm crazy. Many birds of all types here on our 6 acre GMO-free property but rarely do we see any in the bordering crop fields. Most likely, no earthworms in that soil either. Only today, discovered your blog. Very interesting. Thank you.
p.s. Is The Green Man the same as "Pan?"

thanks. Denial stage for everyone when it comes to roundup.

Good question regarding Pan. It is all part of a spirit cosmology. The Green man is associated with Oak groves in particular ala the druids. However, the same principal extends to all plant species and surely to all unique life forms. Thus Pan might be the God of the horse.

A child reported that he or she had been the God of the Dandelions. That same week my medium was shown a spirit being that was surely this same 'God'. The spirit world is clearly using such visions to allow myself and the medium to triangulate knowledge. This way we arrive at certainty however astounding.