Good report on how the gardens were built.   A mat was woven, surely from bendable willows and laid down first.  This allowed earth and mud to be piled on  top which surely pushed the mat down onto the lake bottom while the mat secured the base.  Willow trees were used to secure corners.

It is also possible that boat loads of sand and gravel were also brought in to establish the base itself as lake mud may well have been in limited supply.  I certainly would do it that way.  It would actually be easier that lifting wet mud from the bottom which is needed to provide the thin growing medium.

300 by 30 is 9000 square feet.  That is a lot of fresh produce and with seven crops per year and no dry season to concern yourself with, you are delivering on a six week cycle a steady stream of produce.  Better you can stagger growing starts to even out the output with your neighbors.  A family could operate each garden.

We need specially designed equipment to support this method today but that is easy and  needs to be done.

The canals were also filled with tilapia.,

(FourStingFarm) When Cortez discovered the Aztec Empire in the year 1519, he found 200,000 people living on an island in the middle of a lake. Tenochtitlan, now Mexico City, was the biggest and best-fed city in the world, and this fortress city was completely surrounded by water.

To feed their enormous population, the Aztecs ingeniously built chinampas, or floating gardens, to convert the marshy wetlands of Lake Texcoco into arable farmland. These floating gardens were a masterpiece of engineering.

Each garden was 300 feet long by 30 feet wide. To make a garden, workers weaved sticks together to form a giant raft, and then then piled mud from the bottom of the lake on top of the raft to create a layer of soil three feet thick.

The rectangular gardens were anchored to the lake by willow trees planted at the corners. Each garden was lined on all sides by canals to allow canoes to pass with workers and materials. This network of gardens extended for 22,000 acres across the surface of the lake.

The floating gardens were companion planted with corn, beans, squash, tomatoes, peppers, and flowers, and these incredible gardens yielded seven crops per year…

The Aztec religion was a cult of sacrifice, and the gods were fearsome. The victims of sacrifice, standing on top of the great pyramid, could see the floating green gardens in the far distance, with the sun sparkling on the lake, and then their hearts were cut out and roasted in a fire.

Tens of thousands of heads rolled down the stone steps of those pyramids, and the rivers that turned the temples red in the noonday sun were a plea to the gods to keep the gardens growing. But in the end, when the sky went dark over Tenochtitlan, and the earth shook beneath the feet of Montezuma, it was not the sun god who brought judgment; it was the Conquistadors.

The Spaniards’ military advantages over the Aztecs—the swords, guns, and horses–were nullified in the sanctuary of the floating gardens, and Cortez was covetous of gold, not Indian corn, so he ordered the destruction of the chinampas…

The floating gardens of the Aztecs, the key to their great civilization, were torn to pieces by the hands that built them, and thrown to the bottom of the lake, never to rise again (via FourStingFarm)… 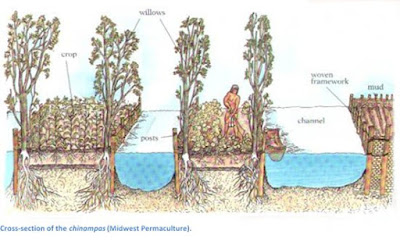