When Mandeville Was Thriving 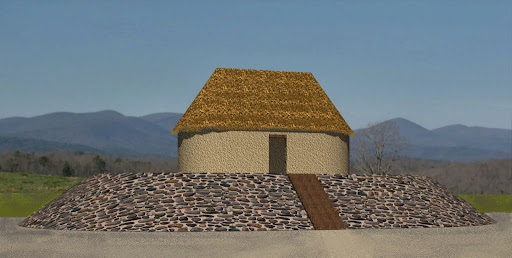 250 BC.  The whole pyramid culture is completely extant but it is very cargo culture.  the Atlantean world had ended some 800 years earlier and we have agricultural societies everywhere and the need to propriate the big man culture all that entails.

Thus we should ultimately trace Vera Cruz back to the Atlantean world although i suspect coastal cities were destroyed in 1159 BC.  Earlier evidence is showing up.

However the real linkage between Peru and Georgia can be an example of trade and a possible colony as well if mining was involved.  That is the usual initial driver of a colony back then as everyone had land to work everywhere and were never too keen to change climates and plant tool kit.  Thus a colony of miners supported by local agriculturists is sensible..
WHAT WAS HAPPENING IN THE AMERICAS WHEN MANDEVILLE WAS THRIVING?

250 BC . . . that is the approximate point in time when someone decided to convert a small, run-of-the-mill midden on a promontory overlooking the Chattahoochee River . . . essentially a pile of dirt and detritus . . . into formal architecture. About 2,200 years later, archeologists would call this place Mandeville. Why did this architectural innovation occur at this place and that time?

In 250 BC there were two places in the Americas where one could see oval mounds, U-shaped earthworks and stone cairns being built in close proximity . . . the Upper Chattahoochee River Valley in what is now Georgia and the Chincha Valley of Peru. Is there a connection? 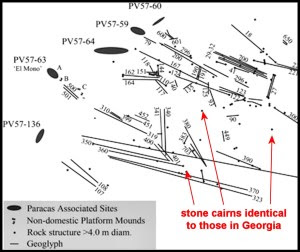 In 2014, archaeologists in Peru announced the discovery of a previously unknown “civilization” in the Chincha Valley in the Paracas Region of Peru. Like their contemporaries in the Chattahoochee Valley, they built truncated oval mounds, U-shaped earthworks used for astronomical observations and hundreds of stone cairns for cremations. The ceramics and art of these two cultures were equal. Also like their counterparts in the Chattahoochee Valley, they were illiterate. For unknown reasons, Gringo archaeologists have no problem labeling illiterate cultures in South America, “civilizations” while they refuse to label the ancestors of the Muskogeans tribes as civilizations. The archaeologists in Peru were unaware that the ancestors of the Creek People also built U-shaped earthworks for sports and astronomical observations.
Paracas is the Hispanization of the Panoan words Para Kusi, which mean “Ocean Elite.” Until the 17oos, the elite of the Georgia Apalache . . . ancestors of the Lower Creeks . . . were called Parakusi-te, which means “Paracas People.” The Apalache elite dressed exactly like the Panoan Peoples of Peru and passed on several of their words and customs to the Muskogee-Creeks.

The archaeological team at the Mandeville Site found nothing that would suggest that a large group of people from a highly advanced civilization settled there. The innovation of building a pyramidal mound may have come from one of their own people, who somehow was in Mesoamerica, perhaps as a slave, and saw pyramidal structures. Swift Creek pottery was more sophisticated art than Deptford Check Stamped pottery, but both styles of pottery were decorated with a carved wooden paddle.

If the citizens in “Mandeville” had begun molding the dirt pile into a truncated oval mound, we could say that the innovation was made by folks from 200 miles upstream at Booger Bottom, where there were also stone cairn cemeteries nearby. There was no need to travel 3000 miles from Peru. However, building a rectangular pyramid was something new for North America.

If this innovation had occurred around 900 AD, we could say that it was the same folks, who founded Waka-te (Ocmulgee National Monument) on the Ocmulgee River. The design and location of the Mound A’s at Ocmulgee and Mandeville are very similar. However, construction of the Great Temple Mound at Ocmulgee began about 1,150 years AFTER the one at Mandeville.

Several POOF readers suggested that the innovation was inspired by visitors from Teotihuacan in Central Mexico. However, in 250 BC, the villages in the Teotihuacan Valley would have looked little different than those in the Chattahoochee Valley. Yep . . . that’s right . . . Teotihuacan was founded slightly later than Mandeville, but at about the same time as when Mandeville began its earthen pyramid. Construction of the Pyramid of the Sun at Teotihuacan began around 100 AD . . . . the exact time that an earthen Pyramid of the Sun was begun on the Etowah River in Northwest Georgia. That date is way too late a date for either structure to have inspired the construction of a pyramid on the Lower Chattahoochee River.

In 250 BC, earthen pyramids were still being built and occupied in southern Vera Cruz, but the largest Olmec cities in extreme southern Vera Cruz and Tabasco had been abandoned for about 250 years. It is possible that peoples from southern Vera Cruz paddled their way to the mouth of the Apalachicola-Chattahoochee River. The founders of the Olmec Civilization had a tradition that they came across the Gulf of Mexico to reach the coast of Mexico.

The center of the Formative Maya Civilization in 250 BC was in the Highlands of Chiapas and Guatemala. At this time, their “pyramids” were built out of earth and rather modest in scale. Initially, stones were stacked and plastered to act as retaining walls, but that architectural innovation came a little later. The Maya writing system would not begin to appear for another three centuries. At this point, the Mayas were a little more sophisticated than the indigenous peoples of the Southeast, but not extraordinarily so. The main difference would have been that the Highland Mayas were far more dependent on agriculture for sustenance.

In 250 BC, there would have been little difference between the cultural levels of the people in the Yucatan Peninsula and the occupants of the Chattahoochee Valley, except those at the Mandeville and Booger Bottom sites were a bit more advanced. Those in the Chattahoochee Valley were building mounds, while Yucatecans were hunter-gatherers, who gardened a bit. Several centuries would pass before civilization arrived in the northern Yucatan Peninsula.

The dominant cities in the highlands during this era were El Mirador (600 BC – 100 AD) and Izapa 1200 BC – 100 AD). Itzapa was actually named Itzapa (Place of the Itza) which is the same name used for the region around the Track Rock Terrace Complex in Georgia. In 250 BC the Itza People did not speak a Maya language. It has been theorized that they were related to the Totonacs, who founded Teotihuacan, and thus would have been speaking a language similar to modern Totonac.

As can be seen above, even at its peak of cultural sophistication in 100 AD, Izapa’s architecture would have been dwarfed by the mounds at Cahokia, Moundville, Etowah, Kolomoki and even Leake’s Mounds in Cartersville. The use of stone and lime mortar was a more sophisticated, labor intensive way to produce architecture, but not significantly more impressive than its contemporaries a Mandeville, Kolomoki and Leakes Mounds.

At left you can see what most Maya cities and towns looked like until after 600 AD. This is a drawing of what the Maya “city” of Uaxtun looked like in500 AD. Not terribly impressive, is it? Famous Maya cities such as Palenque, Uxmul, Chichen Itza and Tikal would have not been a great deal more sophisticated in appearance than this community during the Early Pre-Classic Period. It is quite easy to conceive these simple stone veneered “pyramids” becoming the inspiration for pyramidal mounds in Southeastern North America. 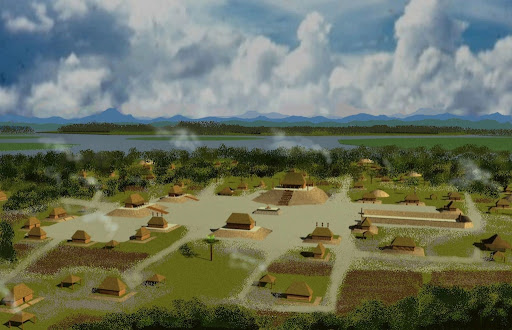 A Maya town in the marshes of Tabasco around 900 AD. Judging from the comments we heard during the Track Rock Terrace Complex controversy, many Gringo archaeologists apparently do not understand that most Mayas in Vera Cruz and Tabasco never built stone architecture.

One of the stone veneered mounds at the Tunacunnhee Site in Northwest Georgia, which was occupied from around 200 BC to 450 AD. This town was occupied at the exact same time as the 9FU14 village site near Six Flags Over Georgia in SW Metro Atlanta. This is an oval-shaped mound that probably was constructed from around 0-100 AD.