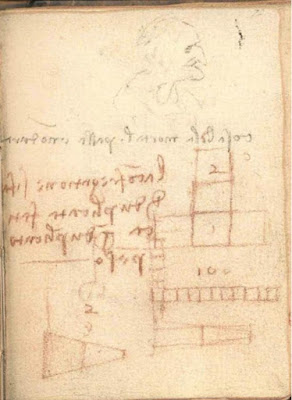 Rather interesting.  he obviously studied the problem and likely did not think it important enough to get exercised about it.  It is generally obvious.

Leonardo was an amazing thinker who formalized a lot of his thought and applied it that way.


He practically invented mechanical drawing, although there surely were precursors.  Yet that provided a language not unlike mathematics for working with phenomena.

A recent find illustrates that when it comes to Leonardo da Vinci, even seemingly meaningless notes may have deeper significance.

According to a University of Cambridge press release, “scribbled notes and sketches on a page in a notebook by Leonardo da Vinci, previously dismissed as irrelevant by an art historian, have been identified as the place where he first recorded his understanding of the laws of friction.”

The research on the subject was led by Ian Hutchings, a professor at the University of Cambridge.

The news release further explains, “Professor Hutchings has discovered that Leonardo’s first statement of the laws of friction is in a tiny notebook measuring just 92 mm x 63 mm. The book, which dates from 1493 and is now held in the Victoria and Albert Museum in London, contains a statement scribbled quickly in Leonardo’s characteristic ‘mirror writing’ from right to left…The rough geometrical figures underneath Leonardo’s red notes show rows of blocks being pulled by a weight hanging over a pulley – in exactly the same kind of experiment students might do today to demonstrate the laws of friction.”

Professor Hutchings points out that the sketches indicate Leonardo was well familiar with the fundamentals of friction in the late 15th century.