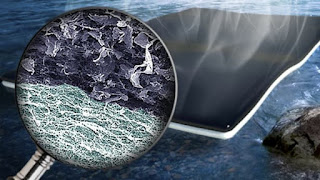 This is truly very interesting. Taking this a little further, it turns out that sunlight impacting on salt water will induce the reversal of the dissolving process inducing salt to coagulate and descend.  thus if the correct wavelenghts can pass through this layer, the salt will simply fall away allowing fresh water to seep faster into the top on the mat.

It is no trick to place this on top of a brackish pond and to set a sump to drain off the produced fresh water.

A very welcome development that can plausibly be used to support irrigation with both seawater and the ability to recycle irrigation run off.

A new system of bi-layered biofoam may provide the means to purify vast bodies of water simply by overlaying them with sheets of this new material (Credit: Washington University at St.Louis)

Engineers at the Washington University in St. Louis (WUSTL) have developed graphene-based biofoam sheets that can be laid on dirty or salty dams and ponds to produce clean drinking water, using the power of the sun. This new technique could be a cheap and simple way to help provide fresh water in countries where large areas of water are contaminated with suspended particles of dirt and other floating matter.

The biofilm is created as a two-layered structure consisting of two nanocellulose layers produced by bacteria. The lower layer contains pristine cellulose, while the top layer also contains graphene oxide, which absorbs sunlight and produces heat. The system works by drawing up water from underneath like a sponge where it then evaporates in the topmost layer, leaving behind any suspended particulates or salts. Fresh water then condenses on the top, where it can be drawn off and used.

"The process is extremely simple," said Srikanth Singamaneni, associate professor of mechanical engineering and materials at WUSTL. "The beauty is that the nanoscale cellulose fiber network produced by bacteria has excellent ability to move the water from the bulk to the evaporative surface while minimizing the heat coming down, and the entire thing is produced in one shot."

Whilst this is a novel use of graphene, the researchers claim that the process used to make their bi-layered biofoam is actually the most innovative part of the whole experiment. Analogous to the process an oyster uses to create a pearl, where a small kernel of material is continually overlaid with layers of a fluid coating that eventually hardens, the bacteria used in the new material produces layers of nanocellulose fibers peppered with particles of graphene oxide flakes.

The researchers also claim that the material is exceptionally light, cheap to make, and can easily be produced in vast quantities. And, unlike even exceptionally simple systems designed to do similar things, the graphene biofoam material is simply laid over a body of water and does not require systems of pipes or energy to run the water through for decontamination.

"Cellulose can be produced on a massive scale," said Singamaneni. "And graphene oxide is extremely cheap — people can produce tons, truly tons, of it. Both materials going into this are highly scalable. So one can imagine making huge sheets of the biofoam."

The production system used to create the biofoam also has the ability to include other nanostructure materials that destroy bacteria and clean the water more thoroughly, allowing it to produce safe drinking water from almost any source.

"We hope that for countries where there is ample sunlight, such as India, you'll be able to take some dirty water, evaporate it using our material, and collect fresh water," said Singamaneni.
The results of this research were recently published in the journal Advanced Materials.
Posted by arclein at 12:00 AM