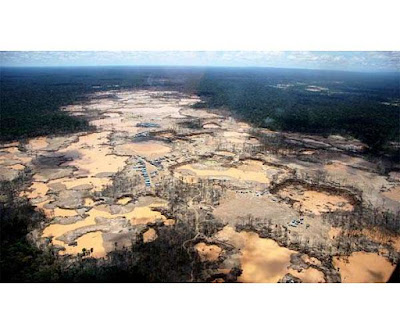 If you knock out the gross biomass which typically equals twice the carbon content above ground and replace it with a protocol that is only an annual representing a small percentage of the original biomass.

So eliminating rainforest is actually a bad practise for that alone.  However, recovery is rapid for rainforests.  Not so quick further north.

That ultimately is my argument for the total reforestation of the Sahara and the Middle East.

Climate change and deforestation have flipped a large swathe of the Amazon basin from absorbing to emitting planet-warming CO2, a transformation that could turn humanity's greatest natural ally in the fight against global warming into a foe, researchers reported on Wednesday.

Hundreds of high-altitude air samples collected over the last decade showed that southeastern Amazon, in particular, has shifted from a "sink" to a source of carbon dioxide, the main greenhouse gas, they reported in the journal Nature.

Terrestrial ecosystems worldwide are crucial as the world struggles to curb CO2 emissions, which topped 40 billion tonnes in 2019.

Over the last half century, plants and soil have consistently absorbed more than a quarter of those emissions, even as CO2 pollution increased by 50 percent.

The Amazon basin contains about half of the world's tropical rainforests, which are more effective at soaking up and storing carbon than other vegetation.

If Amazonia -- with 450 billion tonnes of CO2 locked in its trees and soil -- were to become a consistent source rather than a "sink" of CO2, tackling the climate crisis would be vastly more challenging.

Several factors have driven the transition in the eastern Amazon, according to the study.

"Deforestation and forest degradation both reduce Amazonia's capacity to act as a carbon sink," the authors noted.

Since 1970, the region's tropical forests have declined by 17 percent, mostly to accommodate pasture for raising cattle and the crops that feed them.

Forests are generally cleared with fire, which both releases vast amounts of CO2 and reduces the number of trees available to absorb it.

Climate change itself is also a key factor.

Taken together, these drivers "cast doubt on the ability of tropical forests to sequester large amounts of fossil-fuel-derived CO2 in the future," Scott Denning, an atmospheric scientist at Colorado State University, noted in a commentary, also in Nature.

To what extent the Amazon basin was losing its ability to soak up CO2 has long been a burning question, but satellite data -- partly due to persistent cloud cover -- has not been able to provide a complete answer.

To get around that problem, researchers led by Luciana Gatti of the National Institute for Space Research in Sao Jose dos Campos in Brazil used aircraft to collect nearly 600 CO2 and carbon monoxide samples, from 2010 to 2018, at elevations up to 4.5 kilometres (2.8 miles) above the forest floor.

Northwestern Amazon, they found, was in carbon balance, absorbing as much CO2 into the atmosphere as it gave off.

But the eastern Amazon -- especially during the dry season -- emitted far more than it absorbed.

Another recent study, using different methodology, found that the Brazilian Amazon released nearly 20 percent more CO2 over the last decade than it absorbed from 2010 to 2019.

Above a certain threshold of global warming, global warming could see the continent's rainforest tip into a much drier savannah state, recent research has shown.

This would have devastating consequences both to the region, which currently harbours a significant percentage of the world's biodiversity, and globally.

The Amazon rainforest is one of a dozen so-called "tipping points" in the climate system.

Ice sheets atop Greenland and the West Antarctic, Siberian permafrost loaded with CO2 and methane, monsoon rains in South Asia, coral reef ecosystems, the jet stream -- all are vulnerable to point-of-no-return transitions that would radically alter the world as we know it.