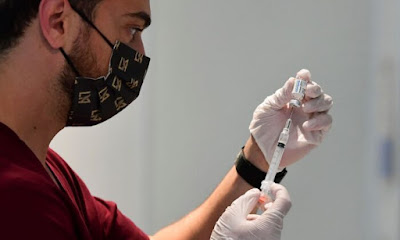 The evidence as received to date suggests that the Vaccine industry has been weaponized.

This has nothing to do with the deliberately gamed test and information systems that serve to support the industry.  That whole support industry has been obviously flawed and deliberately so  The purpose was to drive the weapon itself home in the form of weaponized vaccines.

There is also a body of narritives suggesting multiple COV 19 strains to sustain the overall pandemic narritive.  It was never a pandemic and certainly never anything to do with Corona virus except as a traceable weaponized varient that has quickly burned out as happens with this stuff.

Central to this assault on the global population with weaponized vaccines is been able to control the manufacture of vaccines.  A flawed vaccine will deliver a cocktail of dangerous biologicals.  Nothing else can do this.  Better yet we have plausible deniability under the rubric of manufacturing error.  That also acts as the on off switch.

The evidence to date informs us that the wild biological out there that was released over a year ago and from time to time afterward is the paracite Bamieosis.  This is a malaria like nasty that nicely responds to anti malarial therapies.  This was discovered way too soon and stopped the spread in China cold while propaganda was applied to keep it from the western markets.

Now it turns out the Rna agent in the present round of vaccinations does not stay put but distributes throughpout the body to produce serious damage like blood clots.  This is a mistake?  They knew if we already know.

We are at WAR folks and someone out there thinks any of this is a good idea.  I continue to belive that we have this though.

There are at least 95,000,000 CCP members.  Even the innocent will be blamed for the deaths already happening and been hidden away.  Recall the fate of the NAZIs.

I have shown you the plan.  I do not know what the cleansing of the CCP will look like, but it is reasonable to simply reduce all to agricultural labor as a first step and bring in a new generation of technocrats not attached to the CCP.  In five to ten years it will all settle out.  This needs to be applied globally as well and should include radialized union members as well.  The infection is deep and persistent.

Then there is the issue of punishment which will be had or certainly seen to be had.

as an alternative to corporal punishment I would also band all CCP males as and make all CCP women of age manditory child bearers to offset some of the damage inflicted by the one child policy.  This is something that everyone can understand as an appropriate punishemnt.  However, the best reason is to instill a profound loathing for communist doctrine among all citizens while not wasting lives.  This is a reasonable alternative to summary execution.

We did avoid executing millions of NAZIs