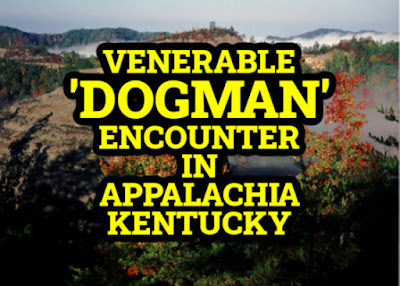 By the way. it is easy to identify that the Dogman is a Giant Sloth by simply looking at the known collection of fossils.  We have plenty of hard data there.  All aspects are sooner or later confirmed in witness reports.

Here we get a good looksee at the reversed knees which confused me when i looked at the fossils early on.  Since then we have now had a couple hundreds separate reports and we are getting all of it.

This is an excellent eye witness report which was thought through long and hard.  He did wonderfully and even caught the creatures fear before it took off.  Again they are ambush hunters.

A Kentucky man's grandfather relates an encounter that he had with a Dogman on his front porch. Was it real? Or is this just another folk tale from Appalachia?

I thought I'd repost an account from social media that caught my eye:

"I grew up in the small foothills of eastern Kentucky, where folklore and stories of haunts and mountain monsters run rampant. Everyone has a cousin or uncle that saw Bigfoot while out hunting, or an Aunt that swears she saw a ghost in the old high school that one time, so it’s hard to discern what’s truth and what’s fiction.

Most of what I’ve personally seen or heard while out in the mountains, I usually attribute to local wildlife. Have I seen anything that is unexplainable to my logical mind? Not yet, but I’m also not arrogant enough to think that these things don’t exist. I saw where someone had earlier posted that said it perfectly; 90% of the stories are fiction, but it’s the 10% that keeps you coming back.

By logic, we have to assume that 10% of all the stories we see are true, and that those people witnessed something amazing and terrifying.

In my small town, Dogman is a known perpetrator of many mis-happenings. I’ve heard stories of it killing chickens, trying to bust down doors, attacking hikers, or just being a nuisance on someone’s farm or property. I’ve also heard stories of it stalking those that live deep in the woods, coming to stare into their windows at night, and even protecting them from strangers that made their way onto their land at some point.

The majority of these people like to tell “booger stories” as we say. They like having a grand story to tell people, for attention or just the pleasure of telling it, I’m not sure which. But a few are trustworthy, and they are usually the ones that will only tell their tale if asked.

My grandfather was one of them. Yes, I know I sound biased because it’s my grandfather. But I have six uncles and an aunt that literally could make a living out of the lies they tell about local cryptids and I’m more than happy to call them liars.

My grandfather though….he was a very logical man. He was a skeptic in everything cryptid, as well as spirits and ghosts, always looking for the logical explanation, and usually pissing off the storyteller as well by questioning everything. That’s why I tend to believe him, because he never tried to lie to me and his other grandkids. If anything, he was always the voice of reason we ran too when we were scared.

But once, when I was younger, I asked him if he had ever seen anything before, be it ghost or monster. I had been hearing stories from my uncles all day about Bigfoot, haunts, etc., and wanted to know his thoughts on it. He sat there for a minute, not even acknowledging my question, and when I was about to ask again in case he hadn’t heard me, he spoke.

When he and my grandmother had first bought our family homestead, they had heard fantastical stories about monsters that roamed that part of the mountains and how evil they were. My grandmother was a little scared, but my grandfather said he just shook his head and went on. He figured it was few black bears that people had been hearing and seeing, or even some bobcats, and that he wasn’t too worried about it.

About 2 months into them living there, sure enough he had seen a momma bear and some cubs making their way up the mountain behind his house, so he didn’t think too much when he heard something pounding on his front door one night, scratching at it and trying to get in.

He told me that he grabbed his shotgun before going to the door. He tried to looking out the front windows to see if he could catch a glimpse of whatever or whoever was there, but he could only see a large black shadow being cast on the porch.

Being the fearless soul that he was (the man fought in WW2, and was under General George S. Patton, so you can imagine what all he’d seen), he unlocked the door and swung it open, expecting a bear or even a person standing there.

It was neither. What he saw that night still had him shook up when he told me this story, some odd 50 years later.

He said that as the door swung open, he saw an extremely large humanoid standing there. It stood a good 6 foot 5 inches, and it was slightly hunched over as it stood on the covered porch. Its arms were long, the hands reaching well past its bent knees, which were bending in the opposite direction of a humans.

He said that it was covered in thick black hair, very dense and dark, and that it had a smell to it that was a mix of a wet dog and raw sewage.

Lastly, the face, or rather the head, was what brought him up short. He said it looked like a German Shepard’s head had been placed on this large, hairy, human shaped body, and that as he looked at it, it cocked its head sideways and looked back down at him, its eyes showing fear and confusion.

He told me that he pulled his gun up, and before his finger could hit the trigger it took off, but not before he got off a warning shot, right in its right calf muscle. He said the howl that came out of it when he shot it scared him more than anything in his life had, and he ran back inside, bolting the door closed.

He stood there, listening as its cries and howls began to fade as it ran deeper into the mountains, until he couldn’t hear it anymore before he moved away from the door and went back to bed.

And he swore to me on all things he holds dear that this thing would still show up sometimes, dragging its wounded leg across his porch as it came up to the door, but it never bothered anything again. He said it would come up to the door, sniff around it before growling softly and then taking off again. He told me that there are a lot of things in the woods that can hurt you, be it beast or plant, and a lot more that can scare you. But the thing he saw that night was the scariest of them all, and that I’d best never go looking for it, because I would woefully regret it if I came across it.

My grandfather has been gone for about 15 years now, and I still believe every word he told me that day. Does that prove the existence of such a creature? Maybe not, and the words of an old war vet won’t be enough to change the minds of some people, but to me it’s the realest story I’ve heard about the creature. I hope that someday, someone can get some actual documented proof, if only to prove what my grandfather went through and what he saw that night." SP