Cannabis was domesticated in north-west China around 12,000 years ago 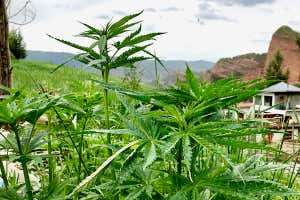 This means it was part of the delivered tool kit for what is now China then recovering from the Pleistocene nonconformity inundation and in an area plausiby protected somewhat by the Korean Mountains.
Understand that in several locales globally, domesticated plants were directly introduced  using methods not even slightly obvious.   This coincided with the emeergence of organized agriculture.
I do suspect that later dates are merely a failure to locate earlier evidence.
,.
Cannabis was domesticated in north-west China around 12,000 years ago
LIFE 16 July 2021

Cannabis was domesticated in what is now north-west China around 12,000 years ago, according to an analysis of the genomes of 110 plants from around the world.

“It confirms it is one of the oldest cultivated plants,” says Luca Fumagalli at the University of Lausanne in Switzerland. “We think it was a multipurpose plant. It was exploited for fibre, food and oil, and possibly medical and recreational purposes.”

It was only around 4000 years ago, the study suggests, that farmers started breeding distinct strains for drug or fibre production.


Little has been known about the domestication of Cannabis sativa because it is hard to get hold of the wide range of different strains from around the world needed for genetic studies. “You can’t just go and collect samples because you go to jail,” says Fumagalli.

Many sources suggest that cannabis originates in central Asia because many strains grow wild in the region. But it grows readily just about anywhere, he says. “That’s why it’s called weed.”

Fumagalli worked with researchers around the world to collect and sequence some 80 different kinds of cannabis plants cultivated by farmers or growing wild. The team also included 30 previously sequenced genomes in the analysis.

The original wild ancestor of cannabis appears to be extinct but strains growing in north-west China are its closest living relatives, the team found. The genomic dating of around 12,000 years fits well with archaeological evidence, including pottery with hemp cord markings on it appearing from around this time.

The team identified many of the genetic changes brought about by selective breeding by farmers. For instance, hemp strains bred for fibre production have several mutations that inhibit branching. These plants grow taller and have more fibre in the main stem.

Strains bred for drug production, by contrast, have mutations that increase branching, resulting in short plants with more flowers. This maximises resin production. Drug strains also have many other mutations that boost the production of tetrahydrocannabinol or THC, the main psychoactive substance.

Hemp was an important crop until around a century ago, says Fumagalli, but declined due to the development of synthetic fibres such as nylon. Now there is a resurgence of interest in cannabis for fibre production, and for medical and recreational purposes, with a growing number of countries decriminalising the possession or growing of marijuana. The team’s findings will help breeders optimise strains for different purposes.

Read more: https://www.newscientist.com/article/2284278-cannabis-was-domesticated-in-north-west-china-around-12000-years-ago/#ixzz712nu0CIu
Posted by arclein at 12:00 AM