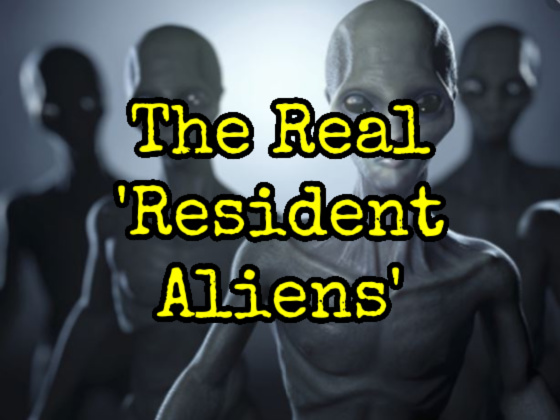 I had never seen this speculation before and i should have.  Yet it is only recently that I have enough evidence to clarify it all.  is it possible that my mind simply dismissed those specula in the past?

We have discovered one clear creature able to project false images into the mind of the observer.  This is the werewolf red riding hood MEME. Yet it is biologically the Giant Sloth or more recently the Dog Man.

My point is that this is effective proof of plausibility for the key claim made regarding UFOs.  The second claim is that plenty of UFOs are simply sentient entities.  Perhaps, but we also have plenty of physical UFOs as well that have proven physical.  Yet both could easily coexist.

This is still an important insight.

Now let me throw you a loop.  The zerons are in fact our spirit bodies.  We already know so called heaven is coexistent with our present physical experience.  We already live in heaven but simply cannot experience it directly using our senses.

By Raymond A. Keller, PhD, a.k.a. “Cosmic Ray,” the author of the international awards-winning Venus Rising Series, published by Headline Books and available on Amazon.com, while supplies last. 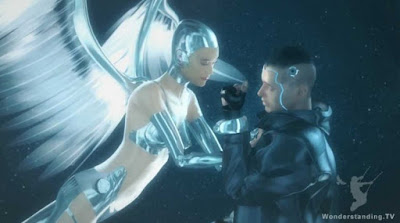 The Zeroids are composed of pure electrical energy and can assume any appearance. They can appear and disappear at will. Photo source: Wonderstanding TV.
Invasion of the “Zeroids”


Since the UFO pioneer researcher and pilot Kenneth Arnold speculated that some UFOs could themselves be living organisms, more and more ufologists were jumping onto his bandwagon. Five years after Arnold proffered this speculation, in January 1981 leading space researchers announced a mind-boggling discovery vindicating the pilot’s theory on the true nature of the elusive UFOs. According to these scientists, the bizarre beings that we have come to refer to as “flying saucers” and “UFOs,” are actually super-intelligent creatures that have been visiting Earth and roaming through the cosmos for literally billions of years. They frequently manifest as bright balls of light in the sky.

Needing a name to classify these enigmatic organisms, the scientific researchers opted on “Zeroids.” What they discovered about them is summed up below:


• They often look astonishingly different to each observer because they can telepathically project and appearance they want, from glowing lights to golden-haired space people.


• They flash across the sky at tremendous speeds, making “impossible” 90-degree turns and disappearing at will.


Veteran ufologist and the author of numerous books on the UFO enigma and other paranormal phenomena, Brad Steiger (19 February 1936 – 6 May 2018), noted that, “After years of research, interviews with hundreds of credible eyewitnesses and actual personal sightings, which I photographed, I am totally convinced these creatures exist.”


Because Zeroids are composed of pure energy, experts like Steiger came to believe that these creatures were capable of amazing feats. “They can appear and disappear at will,” remarked Steiger, adding that, “They can change their shape and size whenever they want. They are a unique form of life which indicates a highly advanced intelligence.”

Steiger’s research also revealed that the Zeroids have the amazing ability to project images directly into the minds of human beings. He recalled a case in upstate Wisconsin where three people observed a Zeroid at the same moment, yet all three of these witnesses saw it and described it as a different creature. Steiger put it this way: “One of the witnesses saw it as a hideous apparition, right out of a science fiction movie, with waving tentacles and bulging eyes. Another witness saw it as a little green man; and the third observer said it was a beautiful space woman with golden hair and glowing eyes who talked of peace and love.

“The Zeroids,” continued Steiger, “can become luminous at will. And they can switch off instantly. That is what leads to reports that glowing UFOs ‘shot away’ at incredible speeds. But they don’t shoot away. They just become invisible.”


Dr. Frank Ruehl, a nuclear physicist, aerospace consultant and expert on extraterrestrial life, agreed with Steiger and declared: “There’s a wide body of evidence supporting the presence of such life forms. These Zeroids are intelligent creatures who are able to survive in space. They are made of pure energy; and since energy cannot be destroyed, these creatures are immortal. The Zeroids are also super, super intelligent. Nothing is beyond their power. They can make themselves completely invisible. They can also change their size, from microscopic to gigantic, and can change their shape.”


Another long-time UFO researcher, Vincent Gaddis, the author of the best-selling book, Mysterious Fires and Lights (New York, New York: Dell Books, 1967), told John Blackburn, a reporter for the National Enquirer, that, “Infrared photographs, which detect the heat given off by the Zeroids, leave me in no doubt these sky creatures exist. There have been many, many authentic, firsthand eyewitness reports.”

Science writer and Zeroid expert Richard Toronto concurs. He claims to have taken at least 25 infrared photographs of the creatures since 1975. “They can make sudden 90-degree turns at high speed and erratic, zig-zag movements,” testified Toronto.


Yet another paranormal expert, John White, the former director of education for the Institute of Noetic Science, a research center founded by the ex-astronaut Edgar Mitchell, the sixth man to walk on the Moon, in Petaluma, California, opined about these mysterious entities: “I have been investigating the Zeroid phenomenon for several years. There’s no shortage of incontrovertible evidence that these creatures exist out there (in space). They have been measured on sensitive electromagnetic detectors when nothing else was visible to the naked eye. They have even been picked up on Air Force radar.”


Clearly, these researchers have based their startling conclusions on solid, scientific evidence accumulated over many years. They attest that the Zeroids have been tracked on radar, photographed and filmed with special equipment and detected with the most sensitive instruments that were specifically designed to pick up electrical energy and heat emitted by the space creatures.


The National Enquirer article of 27 January 1981 prompted Leo Bartsch of 744 South 4th Street, Coos Bay, Oregon 97420, to submit a letter encapsulating his theories about the nature of the Zeroids, or beings of pure energy, to Gray Barker of Clarksburg, West Virginia, the editor and publisher of the Saucerian, a magazine about the UFO phenomenon. While Barker never published the letter, it is interesting that he maintained the document in his files. It is being presented here because of the increasing relevance that the esoteric theory of the UFOs themselves as being the actual space creatures has attained in the ufology community.


Bartsch is intrigued that our eternal electric energy is still such a mystery. “Why is it written, ‘God’s face has the appearance of lightning?’ And why are UFOs consistent in causing magnetic effects all over the world?” He sees some definite spiritual aspects to the UFO phenomenon insofar as a spirit is invisible, and so is electricity, and sincerely asks, “Are UFOs trying to awaken our invisible, eternal and electric soul that still sleeps (Ephesians 5:14)?” To find out the answers to these thought-provoking questions, read on in Bartsch’s speculations concerning the “UFOs as Electric, Living Creatures,” abridged and paraphrased:


The body without the spirit is dead (James 2:26). His Spirit is found in the inner man (Ephesians 3:16). And without Christ, ye can do nothing (John 15:5). The most powerful particles known to humankind are called “electrons.” These bombard each and every one of us daily and penetrate everything. This includes our bodies, every minute. Atomic particles are discovered that do not seem to fit any existing theories.

Jesus once said, “I have many things to say unto you, but ye cannot bear them now” (John 16:12). And now this mysterious eternal energy called electricity is like a living angel to a human being when transformed into television eyes and sent forth, from the Earth to Mars, and to return from 40 million miles away; and just 100 years ago, who could bear this kind of talk? God is a Spirit and a consuming fire (Hebrews 12:29). We only see the result of that which He does. Electricity is invisible and we only see the result of what it does. God touches the hills and they smoke (Psalms 104:32). When lightning touches the hills, they smoke and this smoke smells like brimstone (Yes, brimstone).


When the Lord descended in fire upon Mount Sinai, he warned Moses not to let man or beast even touch the border of the mount (Exodus 19:12-21). So, what was the whole mount charged with?


When Jesus spoke to Paul, his light was brighter than the mid-day Sun (Acts 26:13). And Jesus said, “For as the lightning shineth from one part of heaven to the other, so shall the Son of Man ‘be’” (Luke 17:24). He shall be revealed from heaven in flaming fire (2 Thessalonians 1:8), and he destroys with the brightness of his coming (2 Thessalonians 2:8).

So, if we want to know what UFOs are and where they come from, we need to first find this mysterious, eternal energy called “electricity” is and where it comes from. Are you ready?


The letter is signed; and in the margins Bartsch notes that, “Electricity is still a mystery” and “Electric eels can generate shocks of 1,000 watts, powerful enough to stun a man or possibly kill a horse, according to Encyclopedia Britannica.”


Bartsch is of the opinion that, as the Bible states in 1 Corinthians 1:27, that, “The weak and the foolish will confound the wise and mighty.” It is no wonder to this electrical wizard and theologian that the first shall be last and the last shall be first. However, since Bartsch informed Barker that, “This will be updated,” and since the Saucerian publisher never received the follow-up letter, it is no wonder he omitted the contents from being disseminated in any of his periodicals. Also, the heavy religious overtones may have discouraged the Clarksburg, West Virginia, publisher as well, at least insofar as he was not known to favor a spiritual approach to the UFO phenomenon over a physical “nuts and bolts” approach.

(Editor’s Note: Keep reading this series for Part XIII of the Cosmic Ray’s Real “Resident Aliens,” where you can check out an ancient fossilized rock with the proof of an extraterrestrial presence on Earth millions of years ago and follow the investigations of UFO occupant reports with the premier Spanish ufologist, J. J. Benitez. - Lon)