How to Turn Sea Water Into Fresh Water Without Pollution 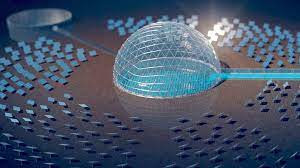 We have made steady progress on desalination over the decades, though mostly by working with obvious methods.  Here we see a solar dome capturing from hundreds of mirrors.  The energy dumped into the sea water produces steam which can then be condensed easily enough.
Not wonderful but it also works.
I would like to see someone attempt to exploit diurnal solar absorption that produces a surface layer of fresh water that can be drawn off.  It could even be tidal driven.
How to Turn Sea Water Into Fresh Water Without Pollution
1,400,417 views
9 Apr 2021
“The Line” is Saudi Arabia’s bold vision for the future of civilization: an ultra-modern city designed to house 1 million people and be entirely pollution-free.
But there’s one problem – it’s in the middle of the desert. And cities require a lot of water. Enter the Solar Dome, a new desalination system built on existing technology. It’s supposed to be a low-cost, efficient, and carbon-neutral way of turning saltwater into fresh water. With water scarcity already threatening the Middle East, Saudi Arabia is the world leader in desalination, but the process does pose problems. We take a closer look at the environmental costs of desalination, and how new innovation like the Solar Dome is trying to tackle these issues. Thank you for watching, liking, and sharing! Keep up to speed with new environment and conservation stories by subscribing to our channel and signing up for alerts.
Story by Philip Jaime Alcazar: https://www.youtube.com/user/philipal... Voice-Over: Julian Nightingall Motion Graphics: Joerg Eisenprobst Producer & Editor: Philip-Jaime Alcazar Script Editor: Eleanor Updegraff Sound Design: Hubert Weninger A Terra Mater Factual Studios GmbH Production Contact: social (at) terramater.at #terramatters Sources:
1 - Steve Jobs introduces the iPhone in 2007 https://youtu.be/MnrJzXM7a6o
2 - Svetlana V Boriskina et al.: Nanomaterials for the water-energy nexus. Massachusetts Institute of Technology (MiT), 2019.
3 - WIRED: "What’s inside this giant ‘solar dome’ coming to Saudi Arabia" July 2017
4 - Aondohemba Aende et al.: Seawater Desalination: A Review of Forward Osmosis Technique, Its Challenges, and Future Prospects. University of Leeds, 2020.