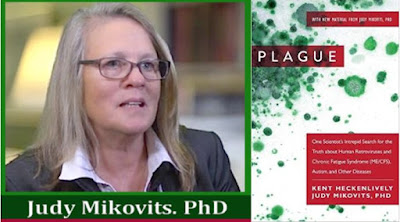 The accusations laid out here merit criminal proceedings.  There will be a money trail, Dr Fauci.  By the same note, if these allegations are false, then criminal proceeding also apply against DR Mikovits.  Those are real stakes.

What we bave instead is silence.  This happens to be what real peer review can look like.  And yes, the lady is mad and she is mad because she is right.

I do not know where AIDS came from but stopping it spread through tainted blood was always an obvious priority.  Tainted blood killed Issac Asimov.  And we always knew it was the blood.  Instead it appears games were played.  All this is reminisant of Hilary.  Same gene in evidence thre.  Enjoy your turn on the stage Dr Fauci..

Dr Mikovits: Fauci is the Greatest Fraud of the Past 40 Years


In the 1980s, Dr Judy Mikovits was working with Dr Frank Ruscetti at the National Cancer Institute.

She isolated HIV from blood and saliva confirming Dr. Luc Montagnier’s earlier isolation and description of HIV as a possible causative agent of AIDS.

She refused because it is unethical for anyone but the author to distribute an unpublished scientific paper. Fauci got a copy from Ruscetti and had his protege Bob Gallo write a paper claiming discovery of the HIV virus.

This video is original content produced by free-speech community-building and knowledge-sharing platform truthwillout.online, based on an article written and published by the Video Rebel on https://vidrebel.wordpress.com/2020/0....


Dr Mikovits: Fauci Is Greatest Fraud of the Past 40 Years.