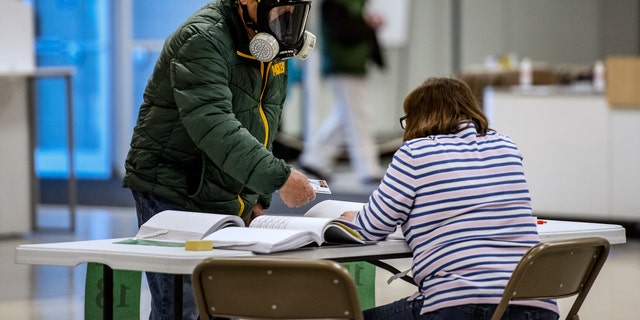 This is rich of course.  This fight is also underway and I expect it all to be countered by November.

However, in the meantime the usual suspects are dicking with state legistlation in perserve ways.

Democratic presidential candidates Joe Biden and Bernie Sanders are on the ballot as voters cast ballots in the Wisconsin primary; Peter Doocy reports.

A prominent Democratic lawyer who represented Hillary Clinton's presidential campaign is threatening to sue the state of Nevada unless it immediately suspends prosecutions for ballot harvesting before the June 9 primary, among a slew of other demands, according to a letter obtained by Fox News on Tuesday.

Marc Elias, now representing the Nevada Democratic Party, also called for a substantial expansion to in-person voting access in the upcoming primary — though just days ago, he said it was a "national disgrace" that Wisconsin was moving ahead with in-person voting amid the coronavirus pandemic. (In both cases, he cited health concerns.) Democrats had feared that high turnout in Wisconsin would hurt their chances, while they have a more optimistic outlook in Nevada.

Writing on April 10 to Nevada Secretary of State Barbara Cegavske, a Republican, Elias first took aim at Nevada Revised Statutes section 293.330(4), which prohibits ballot harvesting and permits only certain individuals, like family members, to return ballots. Ballot harvesting, or the practice of allowing political operatives and others to collect voters’ ballots and turn them in en masse to polling stations, has drawn bipartisan concerns of fraud from election watchers.

In his letter, Elias argued that "many Nevada voters will not be able to return their mail-in ballots themselves and do not have family members – or are separated from these family members because of social distancing – who can do so for them."

"We ask that your office and the office of the Nevada Attorney General immediately announce a suspension of prosecutions under this statute for all elections for which mail-in balloting will be the primary means of voting in the state," Elias said.

At the same time, Elias called for Nevada to stop throwing out ballots when signatures on voters' ballots appear different from those on voters' registrations, saying "lay election officials have never had the necessary expertise" to make an accurate determination.

Robert Forrestal, left, wears a full face chemical shield to protect against the spread of coronavirus, as he votes Tuesday, April 7, 2020, at the Janesville Mall in Janesville, Wis. (Angela Major/The Janesville Gazette via AP)

"In an environment where the vast majority of Nevada voters will be casting a mail-in ballot for the first time, there is the real possibility that hundreds of thousands of Nevada voters could be disenfranchised due to the arbitrary determinations of these untrained officials," Elias wrote. In the alternative, Elias said that those found to have mismatched or missing signatures should be given an additional two weeks, instead of the normal one-week deadline, to clarify the matter.

Elias also demanded that Nevada "require mail-in ballots be sent to all registered voters in Nevada, not just those in an active status." Elias asserted that state election law doesn't distinguish between the two categories of voters.

Republicans have argued that many states fail to adequately clean up their voter rolls. Last year, California was forced to remove 1.5 million ineligible voters after a court settlement last year when California's rolls showed a registration of 112 percent.

Further, Elias urged that Nevada "require more than just one in-person vote center per county in the State’s most populous counties as well as those with geographically distant population centers."

"Nevada voters have a proud tradition of voting in person either during the early voting period or on election day," Elias wrote. "Having only a single in-person location in each county poses certain risks and hardships to voters in various circumstances—voters in dense urban communities, for example, will be forced into dangerously overcrowded polling places, while rural voters will have to travel unreasonable distances just to cast their ballots."

On April 6, though, Elias called it a "national disgrace" that "may well cost lives" when the Wisconsin Supreme Court blocked an order to shut down in-person voting there. "No one should have to chose between voting and their health," Elias wrote on Twitter.

Elias, among other things, is known for his role hiring private research firm Fusion GPS to probe Donald Trump during the 2016 campaign – efforts which resulted in the discredited anti-Trump dossier.

Elias did not respond to a request for comment from Fox News, but Republicans argued that the letter exposed Democratic partisanship.

Elias did appear to be citing health concerns in both cases, however -- first by criticizing Wisconsin for having in-person voting at all, and later by arguing that limited polling locations In Nevada would force voters into overcrowded spaces.

But Walters pointed to the ballot-harvesting request as part of a bigger scheme.

Walters added: “Democrats’ entire strategy is to legalize ballot harvesting nationwide, and this letter proves it. Sending far-left activists door-to-door to collect ballots not only jeopardizes people’s health, it threatens the security of their ballot. The last thing our country needs during a time of crisis is to weaken confidence in our elections, but that is exactly what would happen if Democrats get their way.” 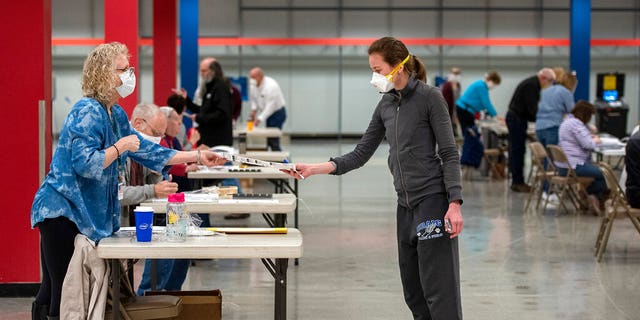 In 2018, despite holding substantial leads on Election Day, many Republican candidates in California saw their advantage shrink, and then disappear, as late-arriving Democratic votes were counted in the weeks following the election. Many observers pointed to the Democrats' use of ballot harvesting as a key to their success in the elections.

“Anecdotally there was a lot of evidence that ballot harvesting was going on,” Neal Kelley, the registrar for voters in Southern California’s Orange County, told Fox News.

In Orange County – once seen as a Republican stronghold in the state – every House seat went to a Democrat after an unprecedented “250,000” vote-by-mail drop-offs were counted, the San Francisco Chronicle reported.

“People were carrying in stacks of 100 and 200 of them. We had had multiple people calling to ask if these people were allowed to do this,” Kelley said.

Fox News' Andrew O'Reilly contributed to this report.
Posted by arclein at 12:00 AM