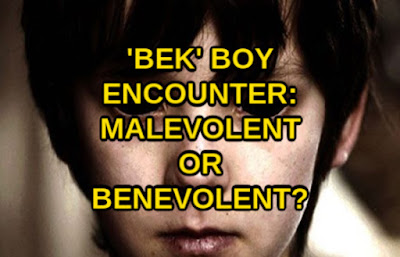 I do suspect that all these are disguised grey aliens wearing face masks.  They can communicate mind to mind.  Another aspect observed is that the observers experience subjective fear which is reasonable.  Yet the interactions are alway benign.  That is great news.


I do think that our visitors are now in the habit of doing walk abouts at least in order to acclimatise.  All this surely for the day in which they do this in broad daylight which has to be soon.


In fact we have zero rreason to fear any alien visitors at all.  They want to be good guests and they are definately tourists.  Actual studies are an other matter and will be done in conjunction with our own folks as well.


Hopefully they all develop a taste for coffee.

A young black eyed boy suddening knocks at the door and persuades the woman to let him in. The experience evolves into something unexpected

"It was late October 2019, I was cooking while listening to my favorite radio station, when I heard someone knocking at the door. I was wondering who could possibly be, given that I live alone and at that moment I was not waiting for anyone, but since I was used to accepting Amazon deliveries from some neighbors I headed straight for the entrance, while the knocking grew stronger and more insistent. The situation was weird, since the couriers normally used the door bell until then, but at the moment I didn't give it much importance.

I opened the door and found myself in front of a child who appeared to be more or less 10 years old. He was wearing some strange clothes, I thought he could come from the countryside. He immediately told me: "I need help. Let me in." I asked him why and where his parents were. Was he lost?

He simply replied: "I have to enter." His voice was flat, monotone, almost synthetic. It was not the kind of voice you would have expected from a child. At first I could not look him straight in the face, partly because it was twilight and partly because he was looking towards my feet. He then put his hand on the door frame. There was something odd that I couldn't explain and it was scaring me. I didn't know exactly what it was because he was just a child. I wanted to close the door, but I couldn't do it; something in my mind prevented me. Perhaps the internal conflict that breaks out when something you take for granted turns out to be different without giving you the ability to assimilate it. At that point he stared at me and I immediately realized that his eyes were solid black, there was no iris, there was no sclera. Only pure darkness.

It was a surreal situation, he was there, right before my very eyes and I was scared. I kept staring at him, being unable to look away from that deep black. I was stuck. In a flat, calm voice he said: "I need help. Let me in. I'm just a child."

My body wanted to abruptly close the door with force, but his eyes told me not to do it, my mind told me not to do it. I felt compelled to do what he was asking me, the only thought in my mind was: "In fact he is just a child who simply needs help."

I moved aside and let him in. He kept looking at me with his empty eyes. The odd thing is that they were empty, but at the same time they instilled in me a sense of peace I never felt before. At this point I didn't know if he was speaking verbally or telepathically. I was confused, it was like he was inside my head. He introduced himself as Eli. He took my hand and I felt a slight electric current go through my skin, the same kind of feeling when you put the laptop's power supply on the skin and your hair stands up.

I don't know exactly what he did at that moment, but he told me about religions and death, how they were used for the purpose of power, how reality was distorted. He showed me horrible things, unspeakable events and I FELT HIS SUFFERING. All in the name of God, whatever religion it is. He also told me that the God we believe does not exist, there are only energy and souls and I believed him. He then said he would come back.

He simply left the house, turned the corner and to this day I have never seen him again. I'll wait for him.

To date, no negative events have occurred due to that encounter." SJ
Posted by arclein at 12:00 AM