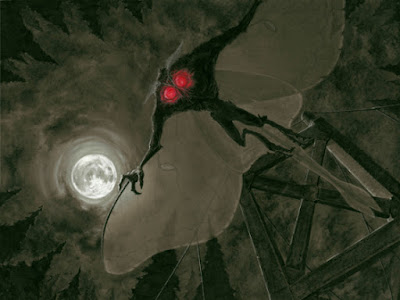 We are now beginning to get more eyeball reports on flying cryptids.  Here are several more.

We now have enough reports to declare several phenomena well worth collecting.


4   Aerial Manta Ray  -  near the sea obviously, but has been observed as well in the air


5 Giant slime mould -  using methane for lift and running with the wind near swamps and a likely cause of the swamp gas hypothesis.


6  Mothman - may be a human gravity device or a giant owl as well or both.  An owl would hunt jack rabbits.

This is getting to be a pretty robust list.  They all take advantage of full skirted evergreens during the day time  away from any likely human presence.

“I saw something that looked like a pterodactyl in Ohio in February 2019. It was right over my head as I was driving. Only about 20 feet up and it was an odd gray color and I assumed it was a goose at first but I got a good look at it and its head was similar to a pterodactyl and no feathers that I could see. It was probably about 3 to 4 foot wingspan. That was nuts. This can't be real can it? I feel like I had to have seen something else but I got a clear look at this thing from underneath...full spread wing and it was no goose or eagle or anything like that. If anyone knows what it could have been please let me know.” FT
-----
[ This one would be mistaken any other time - arclein ]

"It happened in North GA along I 75 a couple years ago in December at 1 am. It was jet black with human legs and nearly hit my car while traveling down the highway and then it was gone in a flash. I truly believe it was some type of fallen angel. It was hovering at first and the wingspan covered a DOT exit sign entirely, making the wingspan at least 15’ min. It made a B line along the berm and turned a hard 90 degrees cutting right across in front of my car at roof height. I had a view of the underside. It had human legs. Once it made it to the median it cut a hard 90 degrees going straight up and out of sight. It had the perfect cover against the night sky because it was the color of night." BN
-----

“My niece saw a pterodactyl as well 7 years ago in 2013 in San Gabriel Valley in Southern California. She was leaving for work at 4:00 AM getting in to her car. She said it came down from a large tree made a lot of noise tumbling off the tree that was too small for it, although, like I said, it was a huge maple tree. She said the tree was too small to hold this thing up so it landed on the street right next to her car. She ran inside. She could barely speak and shaking! I believe her because if you knew her like I do, she is a very serious, responsible person, Damn I wish I would had seen it!” EG
-----
[ accidental sighting here - arclein ]

"I saw one back in 1978, bat wings glowing red eyes. We were living in a trailer at the time and I was 17. It landed on top of the trailer, I looked out the window as the walls were creaking and the damn thing was crawling along the side of the trailer, even broke the seams along that side. I wish to this day I had never looked out. My brother saw it and my dad too. I live in central Missouri. Yes, it gives you a sense of dread." T